Seal of Destiny by Traci Douglass 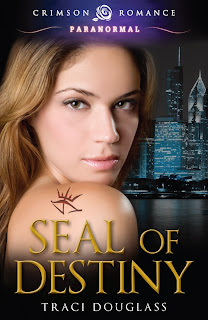 Book Description:
Love conquers all… but can it stop the Apocalypse?

Mira Herald is having the worst life ever.  Not only is she plagued by horrific nightmares starring the Devil himself, she’s now the target of a power-hungry, rogue minion, freshly sprung from Hell and bent on her destruction.  To complicate matters further, she’s acquired a stalker. One who insists he’s a divine warrior sent for her protection because she houses an ancient relic with the power to unleash Armageddon. Last time Mira checked, she wasn’t insane. Still, all this celestial mayhem is enough to drive a girl crazy.

Kagan is a member of the Scion, an elite team of immortal warriors selected by Divinity to aid mankind and save the world. After a century alone, Kagan is summoned for a new mission. He’s eager to begin. Eager until he’s informed his mission consists of protecting a woman with no clue to the power she wields. Plus, his briefing fails to prepare him for his new target’s cosmic-sized attitude problem.  As Divinity’s sworn servant, he’s required to fulfill his duty. His oath, however, does not require him to be enthusiastic about his new assignment or warm-and-fuzzy toward his new compatriot. He plans a wham-bam rescue and a quick return to solitude.

The rogue minion attacks—with the backing of a mysterious organization—and all Hades erupts, putting a fast end to any whirlwind escapes. Accustomed to staunch independence, Mira’s survival now requires full cooperation and an unwavering belief in Kagan. The battle-hardened warrior is also forced to chose: between duty and desire. Amidst the turmoil, Kagan and Mira’s undeniable passion draws them closer to each other and down a path neither expected but both yearn for, more than they ever knew.

Will love save the day? The world’s fate depends on the answer.

Traci is the author of paranormal romance/urban fantasy and contemporary romances featuring a sly, urban edge, including her current Seven Seals series. Her stories feature sizzling alpha-male heroes full of dark humor, quick wits and major attitudes; smart, independent heroines who always give as good as they get; and scrumptiously evil villains who are—more often than not—bent on world destruction. She enjoys weaving ancient curses and mythology, modern science and old religion, and great dialogue together to build red-hot, sizzling chemistry between her main characters.

She is an active member of Romance Writers of America (RWA), Indiana Romance Writers of America (IRWA) and Fantasy, Futuristic & Paranormal Writers (FF&P) and is pursing a Masters of Fine Arts degree in Writing Popular Fiction through Seton Hill University. Her stories have made the final rounds in several RWA chapter contests, including the 2012 Duel on the Delta, the 2012 Molly Awards, and the 2012 Catherine Awards. An earlier draft of the first book in the Seven Seals Series, Seal of Destiny, won the paranormal category of the 2012 Marlene Awards sponsored by the Washington Romance Writers.

Other current projects include upcoming books in the Seven Seals series, a new contemporary novella series due out in early 2014, and a new futuristic suspense series with hints of the paranormal and plenty of romance. 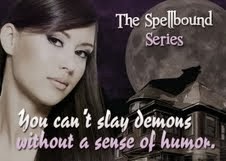 Deadly Witchcraft. Ghostly Threats. Doomed Romance.
They say every town has its secrets, but that doesn’t even begin to describe Fallen Oaks. The townsfolk are a superstitious lot and the mystical disappearance of a local teen has everyone murmuring about a centuries old witch’s curse.
When sixteen-year-old Shiloh Trudell takes a summer job at Craven Manor, she discovers a ghost with an agenda. That’s where she meets the new town hottie, Trent Donovan, and immediately becomes enchanted by his charms.
Finally, Shiloh’s met someone who is supercute and totally into her, but Trent is immersed in the cunning deception that surrounds the mysterious Craven Manor. So much so that he may lose sight of what is truly important to him. And she can’t decide whether she wants to shake him or kiss him. Yet neither one of them can deny the immediate, passionate connection growing between them.
But underlying everything is the fear that Trent may be the next victim on a supernatural hit list, and Shiloh is the only person with the power to save him…
With cryptic messages from a pesky wraith, Shiloh will finally begin to understand the mysterious significance of the strange mark branded on her wrist and decide how much she’s willing to sacrifice to protect the other teenagers in town.
Unfortunately, for Shiloh, not all ghosts want help crossing over. Some want vengeance.
Buy the newly updated version of BEAUTIFULLY BROKEN (part 1):
ISBN: 978-0976180425
ASIN: B0058DE8YI
Amazon Paperback: http://amzn.to/18NB8CG
Kindle: http://amzn.to/OnCDca
NOOK: http://bit.ly/Q6mGqx
Kobo: http://bit.ly/18C4KQK
Amazon UK: http://amzn.to/14edSHU