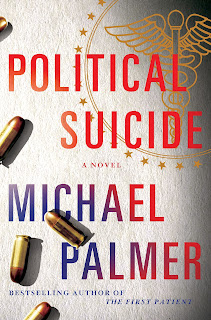 A prominent physician accused of murder
Uncovering the truth could put the entire country at risk
Dr. Gary McHugh, known around Washington, D.C. as the “society doc,” calls his longtime friend Dr. Lou Welcome in a state of panic, certain he is about to be arrested for murder. McHugh was found in an alcoholic blackout in his wrecked car after visiting a patient of his, the powerful Chairman of the House Armed Services Committee, Elias Colston. Soon after McHugh leaves, Colston’s wife returns home to find her husband shot to death in their garage. McHugh has no recollection of committing the crime and no one who would possibly believe in his innocence, other than Lou. As more facts come to light, even Lou has serious doubts. But something about McHugh’s story nags at him and as he looks into matters, pieces of the puzzle don’t point to his friend’s guilt so definitively.
With the help of Sarah Cooper, an ambitious attorney with her own reasons for hating doctors, Lou finds himself at the center of a deadly, high-level conspiracy where the difference between right and wrong is a matter of interpretation, and the words “whatever it takes” have a chilling meaning. If Lou and Sarah don’t uncover the real reasons Colston is dead, they may not survive themselves, and the entire country could be at risk for attacks that could destroy the very fabric of national security.
Book Links:
www.michaelpalmerbooks.com
Facebook: www.facebook.com/michaelpalmerthrillers
Twitter: www.twitter.com/michael_palmer

My thoughts:
I'm a big Michael Palmer fan and was thrilled and honored to be asked to read his latest book, Political Suicide.  He creates characters that a reader can invest in, realistic settings that a reader can believe, and a plot that a keeps a reader on the edge of their seat.  This book is no exception.  You will be staying up late to turn the pages of this new thriller!

Giveaway: Signed Hardcover (sent from publisher)
Fill out the form below - US only - 18+