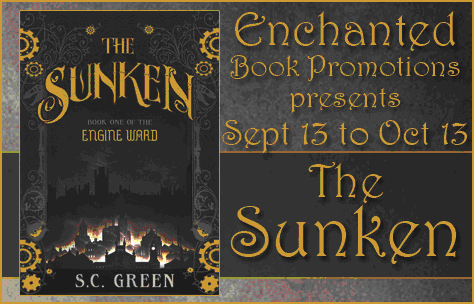 Author Bio
Steff lives in an off-grid house on a slice of rural paradise near Auckland, New Zealand, with her cantankerous drummer husband, their two cats, and their medieval sword collection. The first CD she ever brought was Metallica's 'Ride the Lightning', and she's been a card-carrying member of the black-t-shirt brigade ever since.

Steff writes about metal music, her books, living off-grid, and her adventures with home-brewing on her blog www.steffmetal.com. She writes humorous fantasy under the name Steff Metal, and dark, dystopian fantasy under S. C. Green. Her latest novel, The Sunken, explores an alternative Georgian London where dinosaurs still survive.


Stay up to date with Steff's books by signing up to her newsletter at http://steffmetal.com/subscribe, or like her Facebook page at http://facebook.com/steffmetal. 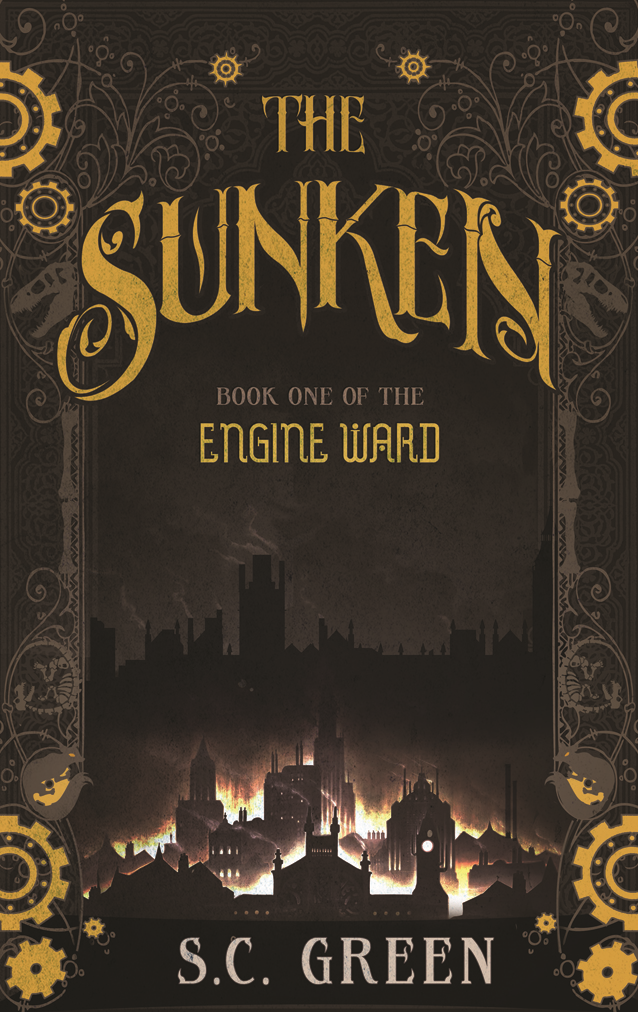 Title: The Sunken
Author: Steff Green
Genre: Steampunk Dark Fantasy
In the heart of London lies the Engine Ward, a district forged in coal and steam, where the great Engineering Sects vie for ultimate control of the country. For many, the Ward is a forbidding, desolate place, but for Nicholas Thorne, the Ward is a refuge. He has returned to London under a cloud of shadow to work for his childhood friend, the engineer Isambard Kingdom Brunel.

Deep in the Ward's bowels, Nicholas can finally escape his strange affliction – the thoughts of animals that crowd his head. But seeing Brunel interact with his mechanical creations, Nicholas is increasingly concerned that his friend may be succumbing to the allure of his growing power. That power isn't easily cast aside, and the people of London need Brunel to protect the streets from the prehistoric monsters that roam the city.

King George III has approved Brunel's ambitious plan to erect a Wall that would shut out the swamp dragons and protect the city. But in secret, the King cultivates an army of Sunken: men twisted into flesh-eating monsters by a thirst for blood and lead. Only Nicholas and Brunel suspect that something is wrong, that the Wall might play into a more sinister purpose--to keep the people of London trapped inside.

The history books — the thick sort written by real historians — will tell you England's troubles began when Isambard Kingdom Brunel knocked Robert Stephenson from the post of Messiah of the Sect of the Great Conductor, and became overnight the most powerful engineer in England. But they do not have the full story.
The true origin began many years before that, with George III — the Vampire King — and the damage wrought by his naval defeats, and his madness. His depravity might have been held in check were it not for a mild spring afternoon in 1830, when a dragon wandered into Kensington Gardens and ate two women and a Grenadier Guard.
I happened to witness this occurrence, although witness, my critics would say, is a word I am not permitted to use, on account of my complete blindness. I had been granted a day's leave from my duties at Windsor Castle to come into the city. In my left hand, I clutched two envelopes. One contained a thick, pleading letter to my publisher, written on my Noctograph in large, loopy letters to arouse their sympathies, humbly requesting a payment for royalties due on my book. The second contained a request for a period of extended leave to travel to Europe, addressed to the Duke and signed by my doctor. In my other hand, I held the brass ball atop my walking stick, rapping the pavement and listening for the echoes whenever I felt myself veer from my path.
I arrived at the offices of F., C., and J. Rivington, my publishers, a little after four, and was surprised to find their offices empty, the door locked, and no one about. I ran my fingers over the door, but could find no notice. Perhaps they had taken an extended luncheon? I sniffed the air, remembering the delicious pie shop on the corner beneath the barbershop. Yes, perhaps I should look for them there.
I had no sooner taken a step across the street, my mouth watering with the anticipation of pie, when coach bells jangled, whistles blew, hooves thundered, and a great commotion rumbled down the street — a carriage speeding over the cobbles, the inhabitants crying out as they were flung back in their seats. I yanked my boot back just as the carriage screamed past and several Bobbies blew their whistles at me. Boots pounded along the street as the usual gaggle of reporters, thrill-seekers, and layabouts chased after the carriage, anxious to see the cause of the commotion.
Of course, being somewhat of a thrill-seeker myself, I shoved the letters into my jacket pocket and followed. I didn't need my stick to follow the sound of the carriage, and I fell in step amongst the crowd and allowed the jostles of the nosy to pull me along. I collected details in my mental map — a right turn here, a left there, the rough cobbles giving way to silken lawn and neat, paved paths. We'd entered Kensington Gardens, tearing through the squared hedges of close-cropped yew and prim holly, cut and shaped to mimic the bastions and fortifications of war. Hydrangea and rose perfumes drifted on the breeze, until the coo of songbirds was interrupted by piercing screams as women scuttled between the hedges, looking for a place to hide.
Then, I heard the roar.
The sound was so low it shook my insides about, so my organs felt as though they had sunk into my socks. The crowd around me, only moments ago hell-bent on moving forward in search of the commotion, scattered in fear, diving into the trees flanking the Round Pond and leaving me in the centre of the path to confront the scene before me.
Though I could only hear and not see what unfolded, the vivid accounts read aloud to me by friends from the papers allow me to picture it now as clearly as anything. A female swamp-dragon (Megalosaurus bucklandii, in the new taxonomy) appeared from nowhere beside the Round Pond, obviously in need of a drink. She bent down, fifteen feet of her, to lap at the water with her thick tongue, her leathery green skin catching the midday sun. The gentlemen who had been preparing to launch their boats on the water scattered, but their women were busy setting up the picnic tables and laying out the tea settings, and did not notice the commotion until the beast was upon them.
A woman cowered under her table, clutching a crying baby and trying to muffle its sobs beneath her skirt. But the dragon — like me — saw the world with her ears. She drove her wide snout under the table and tore at the unfortunate woman, tearing out her pretty arms and staining her dress with blood.
Crème scones and Wedgewood china flew through the air as the beast charged the picnic tables, snapping up morsels of womanly flesh. The screams brought more bystanders — lovers strolling along the Serpentine, the Royal Horticultural Society, who'd been admiring the hydrangea beds, and, finally, a nearby guard on duty with his shiny blunderbuss.
The shots rang in my ears for several moments, and I leaned on my stick, suddenly blinded to the world around me. The ground trembled as feet thundered past, and I turned to move after them, but a voice broke through my panic.
"You sir, don't move!"
I froze. Now I heard the hiss of air escaping the dragon's nostril, and the click of its claws as it stalked across the garden path toward me. The air grew hot, carrying with it the smell of butchery — blood and flesh mingled with the beast's fetid breath. At any moment it would be upon me. The panic rose in my throat, and I fought the urge to run.
Posted by Beverly at 5:00 AM 0 comments