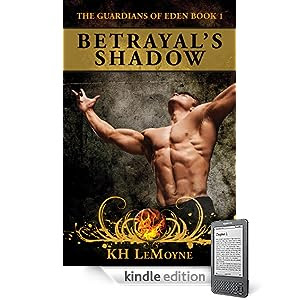 Betrayal's Shadow ~ The Guardians of Eden Book 1 by KH LeMoyne

Amazon Product Description:
What would you do to save your people from extinction?
What if your race held the key to mankind’s future?
One Guardian will risk hell to change the future.

Descended from a race of Guardians created in the far edges of Eden, Turen’s people have survived the last two hundred years, quarantined by plague to Eden’s Sanctum. Risking death to save his people from eternal damnation, Turen chooses capture at the hands of his enemy to seek answers to change the future. Living in secrecy with no mates and no offspring, they fail to deliver on their covenant for mankind, the ability to replenish and heal human souls through the birth of their Guardian children.

Mia Bowman’s full human lineage decrees her off limits for knowledge of Guardian’s secret race. But her uncontrollable nocturnal visits to Turen’s prison cell and her strong sense of justice leave her with little choice but to help. She can heed Turen’s warning and stay clear of his people’s problems or she can ferret out the lies and unravel an ancient tale of murder and deceit. As the complications escalate, the two forbidden lovers race to stop a fatal end to the Guardian line. But it may require their ultimate sacrifice to stop the betrayal and save the Guardian race.
My thoughts:
This incredible story is not your average tale of good versus evil.  This story is so much more than that.  It is a story of the seduction of power and it's ability to taint vision and truth.  The horrifying reality of a twisted sense of commitment and a covenant gone wrong.  It is a story of struggle and sacrifice on a journey to find the truth buried in betrayal, and the price of failure is extinction.
We are introduced to a woman (Mia) who finds herself involuntarily drawn into the terrifying realm of a prison and once there meets a man (Turin) who she, for reasons unknown, is drawn to save.  Once they meet, another element is added to our story. The power of love.
KH LeMoyne has created a gripping tale of deceit and betrayal, love, loss, compassion, courage and the all consuming desire to fight for what you believe in.
I fell in love with the characters.  Each of them brings something vital to the story.
I found myself laughing and crying throughout the story as my heart bled and rejoiced with them as they struggled.
The characters KH LeMoyne has given us are beings that could only come from the vivid and creative imagination of a writer with a storytellers heart and the talent to bring them to life on paper for us all.
Posted by Beverly at 6:00 AM 2 comments