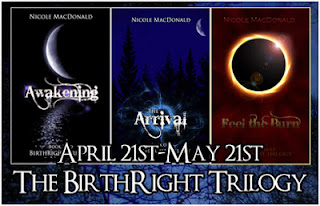 This virtual book tour is presented by Enchanted Book Promotions.

Welcome to The Wormhole and my stop on the tour.
It is my pleasure to feature Nicole MacDonald and The Birthright Trilogy.

Cat, Kassie, Sian and Loi are anything but damsels in distress. Fed up with a lack of decent male specimens they cast a love spell in the hopes of finding their soul-mates. And inadvertently land themselves on another planet.
Oops…
The Arrival, follows the girls' adventures as they stumble through a foreign and often hostile world where humans are NOT at the top of the food chain. Friendships are forged and love teeters on the horizon while the threat of civil war looms thanks to the girls' very unexpected 'gifts'. Will the girls master these gifts in time to survive a war in which, not only are they the ultimate weapons, but also the ultimate prize...

Be careful what you wish for...
A seemingly innocuous love spell caused Catherine, Sian, Laura, and Kassandra to cross worlds in search of their soul mates. But more than love drew them to Gar'nyse. Truths are revealed and lives forever altered after an attack at the castle. An age old feud between two archaic families threatens to tear the world they've arrived in apart. As the ultimate weapons in such a war the four girls are the only hope for peace.
But one of them lies unconscious from the attack, and the destiny that awaits her when she wakes will change everything.

Feel the Burn:
The battle to save Gar'nyse is upon them and already the costs are insurmountable.
With no other option but to knowingly sail into a trap, the girls, the Griffon Guard, and the gathered forces set forth to reach the castle and destroy Jenviet. However the loss of Alek means the task sits fully on the four girls' shoulders and with only one of them at their full Elemental abilities, the risk of death, or worse—failure—is high. Now with nothing to lose, Catherine refuses to link with the other girls, hoping that she alone will be able to take Jenviet. But the malevolent Sorceress of Vo'Arum has other plans...

Nicole has stopped by for an interview:
? When did you first realize you wanted to be a writer?

I’ve always loved reading but writing was far too intimidating. Then, a few years ago, I tried it. And haven’t look back since!

*lol* I still work fulltime! I moonlight as a novelist. I really, really hope that one day soon I’ll be able to write fulltime. Currently I’m a receptionist and prior to that a PA, EA, Call Centre Rep, Bank officer and Administrative assistant.

My first book took eighteen months, now I have it down to about nine to twelve months.

Well it seems pretty normal to me, but I like to write from multiple points of view. Many readers find that rather unusual.

My friends, pets, family, work mates. People I see in the streets – life in general is very inspiring – it’s all a matter of perspective.

Usually an idea occurs that makes me laugh or shiver. And I go from there.

Sew, watch movies, talk my dog for walks, visit our cabin in the bush, and of course read!

A tale where you fall in love with the characters, where the pages pull you in and it hurts to turn that final page, to know you’ve finished.

I find it difficult to pick just one, but I’ll go with Diana Gabaldon.

Fun random questions:
***dogs or cats? Both!! We have both and I adore them.
***Coffee or tea? Coffee in the morning and tea after that *grin* green tea & peppermint!
***Dark or milk chocolate? Milk, or even better, white – the really creamy sort.
***Rocks or flowers? !!! Love pretty crystals.
***Night or day? Can’t pick, anytime there’s a thunderstorm.
***Favorite color? Green.
***Crayons or markers? Crayons
***Pens or pencils? Quills *lol* or those friction pens where you can rub the ink out.

Author Bio
Nicole MacDonald is a thirty something year old Kiwi who loves to read and moonlights as a novelist. From a young age she fantasized about being the heroine in the books and/or movies she watched and credits the series ‘Buffy the Vampire Slayer’ for really inspiring her. Writing only occurred to her a few years ago after reading an abysmal tale with silly useless females where upon she decided to write a tale solely for herself where the girls got to kick butt without the usual sob story—betrayed/abused/abandoned etc. That little tale eventuated into the BirthRight Trilogy.
Nicole’s current daydream is that Joss Whedon (aka the genius of film) will discover the BirthRight Trilogy and demand the film rights to it. Until then, she’s working on several other writing projects and aiming to explore the world with her partner.
Links
The first book, The Arrival, is FREE everywhere.
Amazon US
http://www.amazon.com/The-Arrival-BirthRight-Trilogy-ebook/dp/B004HD5WAE/ref=pd_rhf_gw_p_t_3_KMFR
Amazon UK
http://www.amazon.co.uk/The-Arrival-BirthRight-Trilogy-ebook/dp/B004HD5WAE/ref=pd_rhf_gw_p_t_1_B4EK
Barnes & Noble
http://www.barnesandnoble.com/w/arrival-nicole-macdonald/1100093005
Smashwords (available in any format)
https://www.smashwords.com/books/view/34874
Kobo
http://www.kobobooks.com/ebook/The-Arrival/book-fW1uiT1a2U27zweXd_D9jw/page1.html?s=I03r4l8FH0aHhVh3VsLVbw&r=2
Sony
https://ebookstore.sony.com/author/nicole-macdonald_199421
iTunes US
https://itunes.apple.com/us/book/the-arrival/id431517784?mt=11
iTunes UK
https://itunes.apple.com/gb/book/the-arrival/id431517784?mt=11
Wattpad – where The Arrival is now available
http://www.wattpad.com/11296258-the-arrival-book-one-of-the-birthright-trilogy