Welcome to The Wormhole and my stop on the Hedgeland Blog Tour! 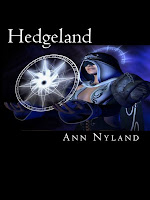 Hedgeland Blurb.
Hedgeland, an urban fantasy of time travel. Dr April Neuland, a Professor of Ancient Languages turned non-fiction writer, has been plagued by dreams all her life, dreams of her past life in the Otherworld. Meanwhile, in a parallel dimension of April's past and Caridwen's future, , a Future History Professor, has allied with the Military to access Future Internet communications and use new technology to influence April to write an ebook novel revealing where she, in her past life as Caridwen, hid the Kiste, a device to travel through time and space. Hedgeland weaves all three time/space frames: Caridwen, , and April. Hedgeland is the first in the Hedgecraft Sequence, but is a fully self contained novel with no cliff hangers.

Author Dr Ann Nyland was on Faculty at the University of New England, Australia. She is a grammar pedant, ancient languages translator, and best selling non-fiction author of such books as The Complete Books of Enoch; Angels, Archangels and Angel Categories: What the Ancients Said; The Book of Jubilees; A Devil of a Job to Find Satan in the Bible, among others.


Today we are hosting an interview with the author A. Nyland!  Thanks Ann for taking time to answer questions for us!!!


* When did you first realize you wanted to be a writer?


I can't remember how old I was, but I was quite young. I wanted to be an artist and a writer. My parents insisted I needed a back-up plan in case I failed at art and writing. They were very practical. When I was five years old I saw a play at school and told my parents I wanted to be an actor. They were quite upset and spent literally an hour or so explaining to me that acting was not a solid career choice. I had to overcome a lot of head stuff to become a writer!
*How many jobs did you have before you became a writer?
I had a few odd jobs but spent much of my life at university, first as a student, then again as postgrad student, and then on Faculty.
*How long does it take you to write a book?
This varies quite widely. My New Testament translation took six years, but that was due to the fact I had to do a lot of research into ancient Greek word meaning from first century . Otherwise it would have been quite fast. The translations of ancient texts always take an awfully long time. I did the first draft of Hedgeland in NaNoWriMo last November, but have had the idea for many years.
*What would you say is your most interesting writing quirk?
Hmm, I don't know if I have one. When I go into "writing frenzy" I neglect everything else (except the horses of course) and write like a maniac. I write until the early hours of the morning, get up early, have two coffees, and then write. I also eat a horrible amount of food when in writing frenzy.
*Do you have a routine that you use to get into the right frame of mind to write?
I don't have a routine as such but the house has to be spotless, and I like lavender oil in the oil burner and to have frankincense incense burning.
*Where do you get your ideas or inspiration for your characters?
Hedgeland weaves three realms, past, present and future. The future is between the present and past - it makes sense when you read the book! The "Past" realm has an accurate background of Irish and Welsh mythology. Most of the characters in the "Present" realm are actual characters, and in fact I base the "Present" on my own reality. I base the character "April Neuland" on myself. I have based the "Past" realm on actual dreams I have had since I was a young child. It's quite uncanny how this ties in with Welsh and Irish mythology.
from the "Future" realm is a favorite character of mine. I based him loosely on a former colleague.
*How do you decide what you want to write about?
I don't actually decide - it just comes to me. This is why Hedgeland is cross genre - had I decided and been logical, I would have made it just one genre!
*What books have most influenced your life?
The ancient Hittite Kikkuli text, which I spent over a year translating. It was a seven month training regime to get war horses very fit, and surprisingly as it was written around 1345 BCE, it was Interval Training which supposedly was only "invented" a few decades ago. After I translated the text, I put ten Arabian horses through the seven month regime. I have also been influenced by the Greek playwrights - Euripides, Sophocles, Aeschylus, and the comedian Aristophanes. These guys were absolutely brilliant, and their ideas are just astounding.
*What do you like to do when you are not writing?
I spend most of the day writing - and at this time of the year in the part of in which I live, chopping firewood, sad to say. When I have a break from writing, I read or do stuff with my horses.
*What is your favorite comfort food?
Ice cream, although I am dairy intolerant. It's a serious addiction. I like butterscotch ice cream, or ice cream full of little chocolate bits.
*What do you think makes a good story?
Just in my personal opinion - a variation of tone; showing not telling - such as describing the play of sunlight on a surface rather than a bald statement that the sun was shining; non-appallingly written dialogue - to that I would add a lack of adverbs; consistency of characterization; and being able to sum up the book in two to three short sentences.
*Who would you consider your favorite author and why?
Homer. I'll say "Homer" although we are fairly sure several people contributed to the Odyssey and the Iliad. The Odyssey is a work of sheer genius. These are works of oral epic poetry, and were recited to people, so people listened to them being recited, rather than read them. They are incredibly long, and the person reciting was able to remember the whole work which I find incredible. However, there is a static structure, an architectural structure, to these horribly long epic works, which provided tricks to help the memory. It's all so clever.
*What book, if any, do you read over and over again?
Homer's Odyssey, partly for the reasons I've just mentioned, and also because I love the language. I also love the epithets - "rosy-fingered Dawn," "flashing-eyed Athena."
Fun random questions:
·                    dogs or cats? Dogs
·                    Coffee or tea? Coffee
·                    Dark or milk chocolate?  Dark
·                    Rocks or flowers? I love rocks, but I prefer flowers.
·                    Night or day? Night
·                    Favorite color? Blue
·                    Crayons or markers? Markers
·                    Pens or pencils? Pens 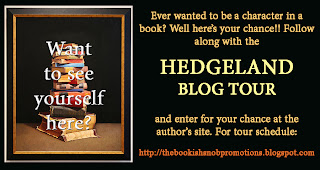 Thanks for stopping by The Wormhole!
The next stop is:
May 18th - The Bookish Snob - http://thebookishsnob.blogspot.com


You can buy your own copy at Amazon or at Smashwords!
******to win your own copy of this book - please leave a comment including your email address.  You must be a follower and over 13 years of age.  This is international! The contest ends on 5/20/11.
Posted by Beverly at 3:31 AM 8 comments