This Giveaway Blitz is presented by The Bookish Snob Tours.
To enter to win a copy please leave a comment with your name and email address!
The giveaway is international and you don't have to be a follower!
One lucky commenter will win an ecopy!
Thanks for stopping by The Wormhole for this great giveaway!
Good luck to all who enter!
Author Bio:

K.E. Saxon is a third-generation Texan and has been a lover of romance fiction since her first (sneaked) read of her older sister's copy of "The Flame and the Flower" by Kathleen E. Woodiwiss. She is a member of the West Houston Chapter of Romance Writer's of America and is a devoted subscriber to the Romance Divas online forum. She has two cats, a 24-year-old cockatiel, a funny, supportive husband, and a garden that's been fried by the recent drought. When she isn't in her writer's cave writing, you can find her puttering in her organic vegetable garden or in her kitchen trying out a new recipe. An animal (and bug) lover since before she could speak, she made pets of all kinds of critters when she was a kid growing up. Her mother even swears that she made a pet of a cockroach one time (but K.E. doesn't believe her). She likes to write funny, sexy romances.
Website: http://www.kesaxon.com
Blog: http://www.kesaxon.com/blog.html
Twitter: @KESaxonAuthor
FB: http://on.fb.me/nqScVw

Blurb for Diamonds and Toads: A Modern Fairy Tale:
Once upon a time, there were two sisters, one blessed, and one cursed by fairy magic...
So each sister's story begins.
Delilah Perrault is blessed with riches beyond her wildest dreams and the man she's had her eye on for ages--even though he secretly has designs on her newfound wealth instead. Delilah's half-sister, Isadora, is cursed with having her every utterance come out as an obscene and humiliating quip, just when the gorgeous hunk she dumped years before under pressure from mama swaggers back into her life.
If you like Bewitched, Sex and the City and Gossip Girl, if you like stories with humor and sexual heat, try out this modern girl's fairy tale.
Read an excerpt: http://bit.ly/nfUcPi
My Buying Links:
Amazon.com: http://tiny.cc/j2t6k
BarnesandNoble.com: http://bit.ly/qiQDpV
Smashwords.com: http://tiny.cc/c1c9v
Posted by Beverly at 8:18 AM 7 comments 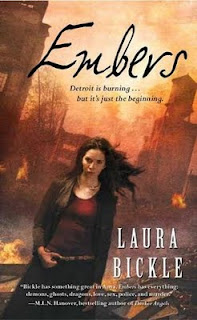 
Unemployment, despair, anger--visible and invisible unrest feed the undercurrent of Detroit's unease. A city increasingly invaded by phantoms now faces a malevolent force that further stokes fear and chaos throughout the city.

Anya Kalinczyk spends her days as an arson investigator with the Detroit Fire Department, and her nights pursuing malicious spirits with a team of eccentric ghost hunters. Anya--who is the rarest type of psychic medium, a Lantern--suspects a supernatural arsonist is setting blazes to summon a fiery ancient entity that will leave the city in cinders. By Devil's Night, the spell will be complete, unless Anya--with the help of her salamander familiar and the paranormal investigating team --can stop it.

Anya's accustomed to danger and believes herself inured to loneliness and loss. But this time she's risking everything: her city, her soul, and a man who sees and accepts her for everything she is. Keeping all three safe will be the biggest challenge she's ever faced.

(longer version:)
I was pleasantly surprised by this story! Ghost hunting is not where I usually go when looking for a paranormal read, but I am thrilled to have found Laura Bickle and Embers.  She has built very believable characters for the reader. I found myself invested in the lives of those characters quickly.  I enjoyed that the characters were all such "real" people.  Of course Sparky is my favorite!  The whole idea of Sparky is fantastic.  Imagine a salamander the size of a large dog that was usually invisible, and loved to eat technology!   I thought the story moved smoothly.  I found it easy to read, language for the average reader.
The originality of the story was both refreshing and appreciated.  I can't wait to read Sparks to see where we are taken next!
Posted by Beverly at 7:07 AM 2 comments