Welcome to The Wormhole!
It is my pleasure today to host Brenda M. Collins.
She is a Bandit Creek author and her recent release is
Witch in the Wind.

, I really appreciate your kind invitation to chat with you and your readers today about my debut novel. I'm so excited about the recent release of Witch in the Wind, which is a (sweet) paranormal romance with mystery elements.

? When did you first realize you wanted to be a writer?
My mother, concerned that I had so little interest in reading as I entered my teens, bought me my first category romance novel. That’s when I knew what I wanted to be when I grew up – a romance writer. From there, my tastes expanded to mystery and fantasy. Witch in the Wind starts out with a murder but comes to life with witches, warlocks, a canine familiar and even a magical dimension I created called The Otherland.

? How many jobs did you have before you became a writer?
As often happens, life got in the way of my writing dream and it’s taken me more than two decades to circle back to it. But I’ve finally done it!  Before that I had a very successful career in the senior management ranks of the international business and high tech world.

? How long does it take you to write a book?
It took me ten years, and lots of classes and workshops, to write the first two manuscripts while I was learning the craft,  but only ten months to write Witch in the Wind. I guess I needed a deadline to really get my butt in the chair, as they say. I’m lucky that my debut novel is part of the Bandit Creek eBook Series so, along with the deadline, I had the support of more than 30 fellow authors. Their excitement is contagious as you’ll see if you catch up with our authors on Facebook.

? What would you say is your most interesting writing quirk?
I dream my scenes before I write them. Honestly! I've been a lucid dreamer from early childhood.

? Do you have a routine that you use to get into the right frame of mind to write?
I need to get enough sleep. LOL. And, contrary to what most writers find about writing in the morning, I'm a night hawk. I have to clear the decks of all my other chores during the day and then I sit down late in the afternoon and the creative juices start to flow. I do my best work from 8pm to midnight.

? Where do you get your ideas or inspiration for your characters?
The easy answer is my imagination but to dig deeper I'd say it's my heritage. I was born and raised on the of in the .  Its history dates back to the Vikings and leans heavily to Irish, who believe in everything from fairies to leprechauns, four-leaf clovers to banshees,  and  have all sorts of rituals to ward off evil spirits or bad luck. There were still Gaelic speakers in well into the 20th century and, like the Irish, we love to spin a tale!  Until I started researching for Witch in the Wind I didn't realize there was a little-known yet long-established tradition of witch lore in culture.

? How do you decide what you want to write about?
It goes back to the dreams—if I dream it, and it still appeals to me that evening when I sit at my computer, then I start typing. I also tend to be very verbal—another family trait, I'm afraid—so I discuss ideas with my friend and critique partner, Roxy Burroughs. She's more advanced as a writer than I am, so I value her advice.

My former work colleagues are still adjusting to—what appeared to them to be—my sudden decision to quit my day job to become a writer. Yet every one of them comments on what a positive difference it has made. They tell me my eyes sparkle when I talk about my story, that my enthusiasm washes over them in waves, and that I seem years younger. That's what following your dreams will do to you. I don't regret the long wait to follow my passion because I believe I am the sum of my experiences—both good and bad, they are what will feed my stories now, although I am so happy to be living this life at this time.

May I add that Witch in the Wind is available on both AMAZON and  SMASHWORDS, if your readers are interested reading an excerpt? And if they are interested in finding out when my next story is coming out they can follow me on TWITTER @bcollinswriter

I'm currently working on a collection of short romantic stories with award winning author, Roxy Boroughs, which is coming out next month. I know magical people from The Otherland will continue to slip through the portal to the mortal world for more adventures, and, of course, Marcus and Avy will have a role to play in resolving the situation with the Witches Council at some point.

Thanks again for having me Beverly.

More ABOUT Brenda M. Collins
Brenda Collins has wanted to write romance since she was twelve years old. At the age of twenty, she spoke to an editor in , who expressed an interest in her story; however, she soon realized it takes more than an idea to be an author. She joined a number of writing groups to learn about ‘the craft’ and completed two mystery manuscripts. When the Bandit Creek opportunity arose, Brenda jumped on board immediately. The story that emerged started with a murder, but it came to life with witches, warlocks, a “familiar” and a magical dimension called The Otherland.
To help her fellow writers develop strong business skills, Brenda has published articles, and delivered workshops to hundreds of writers, on career planning, professional networking and presentation skills. Her most recent article is scheduled to appear in the 2013 Writer’s Market (Brewer, R.L., ed. F&W Media Inc.).
Brenda is currently working on a collection of short romantic stories with award winning author, Roxy Boroughs, which is coming out early this summer. She promises magical people will from The Otherland will continue to slip through the portal to the mortal world for more adventures. And, of course, Marcus and Avy will have a role to play in resolving the situation with the Witches Council at some point.
If you enjoyed Witch in the Wind, please help other readers find it by recommending it to friends or writing a review on Amazon. Follow Brenda on Twitter. For upcoming titles, keep an eye on her Amazon Author Page. 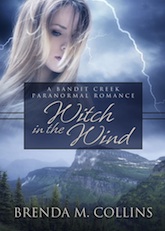 Witch in the Wind

Bandit Creek has a new magical dimension, The Otherland.
When murder strikes in Bandit Creek, and the victims aren’t who they seemed, powerful guardian warlock, Marcus Egan, is sent from The Otherland to investigate. What he doesn’t expect to find is Avalon Gwynn, the grieving daughter of the victims, who has no idea she’s an extraordinary, hereditary witch. And Avy’s pent up magical abilities have just been set free in the mortal world.
Can Marcus catch a killer while making sure Avy doesn’t bring crashing down on the town—destroying Bandit Creek for the second time?