Blog Tour: Hands on Me by Kim Carmichael (Tour wide author giveaway too) 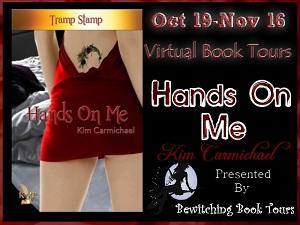 This virtual book tour is presented by Bewitching Book Tours.
Click HERE to see the tour schedule.
Welcome to The Wormhole and my day on the tour.
It is my pleasure to feature
Kim Carmichael and her book Hands on Me. 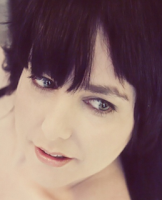 Kim Carmichael began writing eight years ago when her love of happy endings inspired her to create her own.  She has a weakness for bad boys and techno geeks, and married her own computer whiz after he proved he could keep all her gadgets running.  When not writing, she can usually be found slathered in sunscreen trolling Los Angeles and helping top doctors build their practices.


Hands on Me Excerpt
"Stop!" A man yelled.
The barrel of another gun met her inches from her face. She tensed, not from the gun, but from the familiar inflection in his voice. The position of both their weapons hid the man's face.
"Get in and lower your gun, or we'll both lose."
"Back up and lower yours, or you won't have a hand left." No one told her what to do, not ever again. The click of her cocking her weapon echoed around them.
He stepped back. "Get in and close the door."
With her gun still raised, she stepped and waited for her opponent to flinch first.
"Now." He moved a fraction of an inch.
She did the same, and with the silent acknowledgement they would both comply, they lowered their guns in unison. She almost shot herself in the foot at the sight of the man who greeted her. Before she made a mistake, she de-cocked her gun and shook her head. "Colin?" Her body betrayed her by trembling. Was this her punishment?
"Gwen." He shoved the gun in his waistband. "You're the one. I would have never guessed."
Think. She screamed at herself to remember her training, and not allow him to best her or distract her. She glanced around the room, giving her time to not look at him. Agents were supposed to be everyday people and blend in, but Colin Alexander stood out. From the moment she quite literally fell into his lap through a two-story ceiling three years ago, she wasn't sure why his agency chose such a standout. She supposed his combed-back black hair and golden eyes were some bizarre form of female torture.

Hands On Me
Tramp Stamp Series Book One
Kim Carmichael

Agent Gwen Fredricks is a living target.  Captured after a failed mission, the code to crack a safe has literally been permanently hidden on her.  To free herself, she must retrieve a final key.

All Agent Colin Alexander has to do to avoid a desk job is get a code said to be on an enemy agent.   He never dreamed it would actually be on the agent, especially Gwen.

The simple shoot-and-swoop mission takes a turn for these two sometime-lovers and full-time rivals when they call a truce to give into their desire.  Now with the promise to keep both hands on each other at all times, they share a night together.  Loyalties are tested when Gwen manages to swipe the key away, and Colin discovers the code carefully embedded into Gwen's tramp stamp tattoo in a glow of UV light.  When morning comes they must decide if what they feel for each other is worth betraying their agencies.

My thoughts:
This is a super short story, only 17 pages.  The story you get in those few pages is great.  You get action from the go.  I enjoyed the characters, but would love to know more.  It is obvious that they have a past, and are hoping for a future, but we don't get a lot of details in this short piece.  I like the writing style and loved the story.  Can't wait to read more about these two characters. 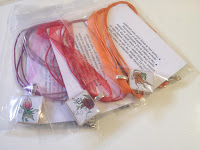