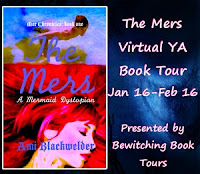 This Virtual Book Tour is presented by Bewitching Book Tours.
You can see the entire tour schedule by clicking HERE.
Welcome to The Wormhole and my day on the tour!
Today it is my pleasure to feature Ami Blackwelder and her book The Mers. 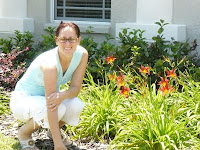 About The Author:
Ami Blackwelder is a forbidden romance writer in the paranormal, scifi, and historical genres. Growing up in Florida, she went to UCf and in 1997 received her BA in English and teaching credentials. She travelled overseas to teach in Thailand, Nepal, Tibet, China and Korea. Thailand is considered her second home now. She has always loved writing and wrote poems and short stores since childhood; however, her novels began when she was in Thailand. She also wrote three nonfiction spiritual books at this time.
Acheivements:
In university, having won the Best Fiction Award from the University of Central Florida (Yes, The Blair Witch Project University;), her fiction From Joy We Come, Unto Joy We Return was published in the on campus literary magazine: Cypress Dome and remains to this day in University libraries around the country. Later, she achieved the Semi-Finals in a Laurel Hemingway contest and published a few poems in the Thailand’s Expat magazine, and an article in the Thailand’s People newspaper. Additionally, she has published poetry in the Korea’s AIM magazine, the American Poetic Monthly magazine and Twisted Dreams Magazine.
http://amiblackwelder.blogspot.com

The Mers: A Mermaid Dystopian
By Ami Blackwelder
Book 1 Mer Chronicles
What lies beneath the surface?
One hundred years from now, the world has changed and brought with it, new forms of life.
Who are the Mers? Who is Mira?
Mira always knew she was different. Growing up with Mers, she never quite fit in. When Mira breaks the rules and takes Niren across the border that divides Ellis Island and New Jersey, a  border that divides two vastly different worlds, she thought the journey to find out who she really is would be an easy one.
But as the world in Jersey proves to be a convoluted mix of Aristocrats who hate the Mers, Pirates who want to sell them, and Magi who want to use them...finding her true identity will be a challenge, especially when her best friend Niren is a Mer willing to fight to the death.
Amazon Print  Amazon Kindle

And for your reading pleasure:


An EXCERPT:
Liberty Shore
On the abandoned shores of Ellis Island, New York, Mira watched the pink horizon blend with subtle tones of grey and muted purples until the broken sky became an endless abyss of blackness and countless stars. Even the Statue of Liberty was barely visible anymore. Only a faint tip of Liberty’s torch stuck out of the brazen waters that had risen steadily each year for the last one hundred years.
Most of the land masses on Earth were now covered in water, with exception to mountains, and a few regions that had been prepared before the Great Deluge. Because scientists warned of the events that would transpire, the wealthiest of the world built upward upon some of the existing land to create higher ground level. Manhattan, along with Ellis island, being some of these coveted regions that the wealthiest did not want to give up to flooding.
Mira only knew of a few places still in existence, such as New York, New Jersey, and Washington state. She heard rumors there were bits of land on Africa, Europe, and Asia, but she never traveled outside of her home to know for sure. Besides, she would miss Nerin too much if she ever left, and she had everything she would ever need right here, right now. Hadn’t she?
Sliding his webbed fingers over Mira’s left shoulder, Nerin plopped next to her and took a deep breath. Handing her one of his many paper origami designs, he placed a dove into her open palm.
“For you. For peace....and overcoming fear.” Taking in a deep breath, he took pleasure in the smell of the salty sea. The ocean had captivated him, maybe as much as any young lady in Liberty Shore might captivate him. But his fixed gaze fell to Mira time and time again, more than anyone else. Something about her innocence and frankness drew him to her.
“Thanks,” Mira blushed. He always gave her things.
“I knew I’d find you here,” Nerin glanced in her direction, his eyes lit up like fire crackers.
“You know me well, I guess,” Mira blushed, her freckled cheeks reddening as she tilted her head towards him. Curling her legs underneath her chest, she shivered in the cool breeze and hugged her legs with arms covered in a maroon sweater. Nerin, enchanted with her beautiful, cherry-red hair, softly combed his webbed fingers through it.
“What is it about this spot?” Nerin raised a dark brow above his yellow eyes, untangling his hand from her hair.
“I don’t know,” she shrugged. “I feel on the brink of discovery here....like there is something more beyond the horizon.”
“Yes, more ocean,” he chuckled, the crooked corner of his lip rose when he laughed.
“Don’t poke fun,” Mira nudged him with a hard elbow, “Besides, this place is important to your...you too.” She almost said, “your kind, too,” but remembered she didn’t want to make that distinction yet. Others noticed her differences. She saw her differences. But no one said anything out loud.
“Yes...” Nerin rolled his neck back in thought; his shining, yellow eyes matched the stars radiance in the darkened purple sky. Mira never got over the fact that his eyes, everyone’s eyes, glowed yellow. Why hadn’t hers? “A lot of history here. It’s not called Liberty Shore for nothing. My parents told me this is the one place where Mers can live freely.”
Mira sighed, the mention of the word Mers always nearly brought her to tears. As if they somehow did not belong to the human race. As if their unique features existed only to remind the human world of the abominations of God. Why were there such class distinctions?  After all, it wasn’t their fault the flood had happened.
One hundred years ago, humans began to reap what they had sewn. The Earth fought back with vengeance. Water saturated the planet in what had been dubbed the Great Deluge. Much of the land on Earth vanished underneath the seas. Many humans died, but those who survived became divided.
Thanks for stopping by The Wormhole.
Happy Reading.
Posted by Beverly at 5:00 AM 0 comments