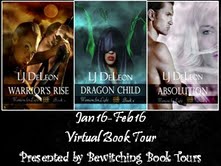 This virtual book tour is presented by Bewitching Book Tours.
You can see the entire tour schedule by clicking HERE.
(Giveaway form located at end of post!)
Welcome to The Wormhole and my day on the tour.
It is my pleasure to feature L.J. DeLeon
and the Warrior's of Light series.

LJ DeLeon Bio:
Bestselling author LJ DeLeon is an Army brat and a world-traveled former CIA Intelligence Analyst who has seen enough of this world to appreciate other worlds. Working for the CIA was great training for writing fantasy, paranormal, and futuristic romance--and understanding the warrior mentality. Amazing how real life and fiction overlap.

WARRIOR’S RISE  (Warriors for Light, Book 1)
For Fae-human half-breed Deva Morgan, life as she knows it changes on her thirtieth birthday. One moment she’s a barkeep, the next she is a warrior fated to save Earth from the Dark Lord and his demon horde. Shunned by both her races, she faces a danger-filled quest with few allies. Too bad her powers haven’t fully emerged or stabilized.
For Deva it is life or death, on-the-job training with her companion, Padraig O’Neal, a Fae warrior with a shadowed past. Can he quiet the storm raging inside her, help her harness the growing power within her, and provide a barrier between Deva and a fatal outcome? Will their love be enough to save Deva and stop the Dark Lord’s demons from entering Earth?
WARRIOR’S RISE Excerpt:
Padraig ignored the snarling werewolf in front of him, the throbbing beat of ‘70’s rock, the whirling of the ceiling fan, and scanned the near-empty bar. No human norms present. Good, it made his job easier, cleaner.
His gaze locked onto the woman behind the aged mahogany counter. She was beautiful, almost ethereal. Strange, considering she was about six feet and all angles. Even her face was a series of planes. Yet it all fit together in a unique, mesmerizing image.
Inhaling, he filtered out the residual odor of norms and their stale cigarette smoke. Her scent of summer with just a hint of wisteria, drew him, enveloped him, singed him with the heat of her presence.
Her bored expression didn’t hide the quick assessing look in her cool hazel eyes, then dismissal.
Damn it to the Abyss. Her icy disdain combined with the unfamiliar pull of her sensuality were complications he did not need.
Not now. Not ever.
Amazon  http://www.amazon.com/Warriors-Rise-Light-Book-ebook/dp/B004T39Y88/
B&N  http://search.barnesandnoble.com/Warriors-Rise/LJ-DeLeon/e/2940012338020/
ARe  http://www.allromanceebooks.com/product-warrior039srise-528182-140.html
Smashwords  http://www.smashwords.com/books/view/48517

DRAGON CHILD (Warriors for Light, Book 2)
A fire-breathing dragon, Moira O'Neal, was exchanged at birth for a Fae princess. Discovering the truth, she escapes the cage of the royal court and joins forces with the sexiest wereleopard on Earth. She fights the urge to mate and the trap that comes with it as they race against time to find the missing princess and a master of the black arts who covets her power.
Major Steve Taylor, a wereleopard in the Army For Light, partners with the impetuous Moira in the middle a dangerous mission where failure means all their deaths. Worse, his leopard decides Moira is his mate, leaving the man at war with his cat.
DRAGON CHILD Excerpt
Never one to ignore a warning, she inched forward, preparing to make her escape. The door opened and Ma entered followed by Major Steve Taylor, a wereleopard visiting from Earth.
Moira shivered at the sight of the tall, lean, hard-muscled warrior’s unflinching moss-green stare. His scent of laurel and crisp mountain air mixed with a hint of musk wafted over her, exciting every nerve ending. It drew her, enveloped her, melted her where she sat. Good thing she’d never gotten this close to him at her brother and Deva’s wedding. She inhaled again. Goddess help her, she would have fallen at his feet and made a fool of herself.
Moira gnawed on her lower lip. What was it about this hard, closed-off Were? What made her look twice at him when no other male triggered her interest?
A second later, a guard in the hall pulled the door shut, sealing them inside.
Moira eased back into her corner and prayed she escaped discovery. They couldn’t see her, but she could observe and hear everything from her location. . . .
He placed a finger to his lips and scanned the room. His eyes phased to those of a leopard, fitting seamlessly into his human face—unblinking, soft grass green with a narrowed black iris. His mouth opened slightly, his tongue pressed against his teeth, as if tasting the air. His head made small abrupt movements, taking in the room.
Moira’s eyes widened at his mouthed, “We aren’t alone.”
She froze as he turned and prowled toward her. Damn his wereleopard nose. She squeezed her eyes shut and prayed to the Goddess with every cell in her being she were invisible.
Goose bumps broke out all over her body. The air in front of her stilled. Nothing moved. Only his scent touched her.
He’d found her.
She opened her eyes and stared into his. Her chest constricted with dread. He stood, fully alert, feet planted directly in front of her. If he’d been in cat form, she suspected his ears would tip forward to catch the slightest breath. Whiskers would twitch, testing for any change in the air.
Amazon  http://www.amazon.com/Dragon-Child-Warriors-Light-ebook/dp/B004THDM6Y/
B&N  http://search.barnesandnoble.com/Dragon-Child/LJ-DeLeon/e/2940012342584/
ARe  http://www.allromanceebooks.com/product-dragonchild-529004-140.html
Smashwords  http://www.smashwords.com/books/view/49045

ABSOLUTION (Warriors for Light, Book 3)
He did the unforgivable. Druid Lucan Woods killed his surrogate father and best friend for the greater good. Wracked with guilt, he infiltrates a brotherhood of evil, hoping the mission is one way. Absolution may come from a missing Fae Princess, if he will accept it. Or will he reject her love and use her as a pawn in his drive to destroy the leader of the brotherhood?
Fae Princess Alanna has just learned her twin daughters are alive. She leaves hIfreann to search Earth for them. Only she can touch Luc’s heart. But will he let her? Will he open his stained soul and allow her to enter in time to save them both?
ABSOLUTION Excerpt
For a short interim, she had felt nothing from him and feared he had succeeded. Then his pain speared her heart and, when she had touched his mind, she learned he had been in Otherworld. That his life and soul survived was a balm. Now, in this room, his self-loathing dominated to a degree she’d never encountered or dealt with in her years as a healer.
His bleak devastation battered at her, driving her to her knees. Unable to bear his oppressive grief, she crawled to him, and curled her hands over his knees, forcing a touch, a rush of compassion, anything to save him. The reason didn’t matter, only the certainty that to do nothing, to allow him to be consumed, would be disastrous for both of them. He would suffer, as would she and her daughters.
He stared at the gun then sighed. “If you’re going to do it, Luc, get it over with.” He placed the weapon in his mouth, aimed up and back. His finger slid off the guard and onto the trigger.
No! She squeezed her fingers hard around his knees. Her hands didn’t pass through his flesh, despite their non-corporeal composition, reassuring her that she had gained complete control over traveling the astral plain.
Waves of energy rushed from her and enveloped him.
He stilled. Slowly he removed the weapon, his finger poised on the trigger.
She moved to the bed and eased behind him to cradle his head between her palms. She bent, her lips to his ear. It wasn’t your fault. Hear me, warrior. Do not burden yourself with this weight.
His gaze searched the room as he raised the weapon toward the door.
This wasn’t your fault.
“Wasn’t my fault? If not mine, then whose?” His voice rasped harsh and raw with pain.
He had heard her. She had time and a link to stop him. One she wouldn’t drop. Never again would she be this close to losing him. Nate’s death was due to manipulation by the parasite inside of him. He was an innocent caught in the crossfire. He would be saddened to have you lose your way like this. Please, I need you.
Amazon  http://www.amazon.com/Absolution-Warriors-For-Light-ebook/dp/B0050D8OPU/
B&N  http://search.barnesandnoble.com/books/e/2940012411082/
ARe  http://www.allromanceebooks.com/product-absolution-547230-143.html
Smashwords  https://www.smashwords.com/books/view/58695
Bio:  Bestselling author, LJ DeLeon is an Army brat and a world-traveled former CIA Intelligence Analyst who has seen enough of this world to appreciate other worlds. Working for the CIA was great training for writing fantasy, paranormal, and futuristic romance--and understanding the warrior mentality--amazing how real life and fiction overlap. Honor: the ultimate seduction.
Contact information:
http://www.warriorsforlight.com


Thanks for stopping by The Wormhole!
Happy Reading!
Posted by Beverly at 5:00 AM 7 comments