My Mailbox is overflowing! 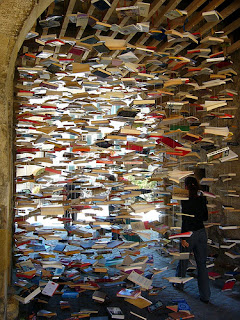 I have had a book buying binge week!  I won some books on blogs, my friend Kathy gave me a book, I ordered books from the Scholastic book orders, amazon, and I shopped the book fair at the school!  Wow - toooooooo many books - my TBR just exploded!  My son just started reading the Cirque du Freak series by Darren Shan and we only had the first two books - so....off to Amazon.com and get the last 10 in that series.  They arrived yesterday!  I will list the books and where they came from - I am skipping the pics this week.  My boyfriend sometimes reads my blog and there is no sense in adding fuel to the fire by adding a visual!!!

Won on blogs:  Thanks so much to the bloggers who have hosted the contests/giveaways and for the great books that I have received!!!
Hannah by Hannah Westberg - won from Kari at A Good Addiction
Won at O.W.L.
Benjamin Pratt & the Keepers of the School: We are the Children by Andrew Clements
Nightmare at the Bookfair by Dan Gutman
Brixton Brothers: The Case of the Case of Mistaken Identity by Mac Barnett
Amelia Rules: The Tweenage Guide to NOT Being Unpopular by Jimmy Gownley
Spaceheadz by Jon Scieszka
Lesley Hauge sent me her book (won at Icy Books): Nomansland
Gift from Kathy:
Never After (four stories: Laurell K. Hamilton, Yasmine Galenorn, Marjorie M. Liu, and Sharon Shinn)
From Amazon:
Alpha by Rachel Vincent
Living Dead Girl by Elizabeth Scott
Oogy: The Dog Only a Family Could Love by Larry Levin
From book orders:
Wuthering Heights by Emily Bronte
Wolven by Di Toft
Waggit's Tale by Peter How
The Battle of the Labyrinth by Rick Riordan
Leviathan by Scott Westerfeld
The Girl Who Survived by Bronia Brandman and Carol Bierman
Don't Judge a Girl by Her Cover by Ally Carter
Battle Heroes by Allen Zullo
Chasing Lincoln's Killer by James L. Swanson
The Mostly True Adventures of Homer P. Figg
The Kind of Friends We Used to Be by Frances O'Roark Dowell
Mudshark by Gary Paulsen
I Survived by Lauren Tarshis
Return of the Homework Machine by Dan Gutman
The Last Olympian by Rick Riordan
Incarceron by Catherine Fisher
Sabotaged: Missing Book 3 by Margaret Peterson Haddix
Amulet #3: The Cloud Searchers by Kazu Kibuishi
The Evolution of Calpurnia Tate by Jacqueline Kelly
Al Capone Does My Shirts by Gennifer Choldenko
Linger by Maggie Stiefvater
Fever Crumb by Philip Reeve
Mocking Jay by Suzanne Collins
Bone: Tall Tales by Jeff Smith
Lost in the Labyrinth by L.A. Peacock
Clementine, Friend of the Week by Sara Pennypacker
From the book fair:
Hush, Hush by Becca Fitzpatrick
Candle Man: Book One by Glenn Dakin
Framed by Gordon Korman
Prophecy of the Sisters by Michelle Zink
Eon by Alison Goodman
Wereling by Steve Feasey
Vampire High by Douglas Rees
Dark Fire by Chris D'Lacey
Seekers #4: The Last Wilderness by Erin Hunter
Lockdown: Escape from the Furnace by Alexander Gordon Smith
Dog Lost by Ingrid Lee
Kandide: The Secret of the Mists by Diana S Zimmerman
The Clockwork Three by Matthew J. Kirby
Trance by Linda Gerber
Dark Life by Kat Falls
Posted by Beverly at 8:00 AM 9 comments