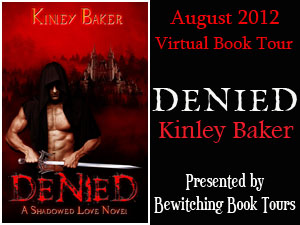 This virtual book tour is presented by Bewitching Book Tours.
Click here to see the entire tour schedule.
Welcome to The Wormhole and my day on the tour!
It is my pleasure to feature Kinley Baker and
The Shadowed Love Series! 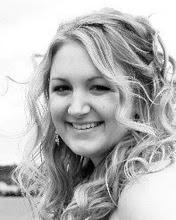 Kinley Baker is the author of the fantasy romance novel, Ruined. She read her first romance at the age of thirteen and immediately fell in love with the hero and the genre. She lives with her husband and her dog, Joker, in the . As a firm supporter of all supernatural lifestyles, she writes fantasy romance, paranormal romance, and urban fantasy.

He pulled her head back gently by her hair, so they looked straight into each other's eyes. Their bodies pressed tightly together. "Liar."

When invaders brutally massacred the women and children of the Varner, Caleb witnessed loss and destruction on a scale few can comprehend. As the leader of a race on the brink of extinction, his only hope for survival is gaining acceptance into the . Struggling with new customs, he meets Tabitha, a woman who challenges his limits.

Add DENIED as To-Read on GoodReads!