My thoughts:
This is a super fun, hilarious, short little story told in verse!
It was a blast to read!  Creepy is a bit twisted, in a funny way.  He is sarcastic and bold.  The story he tells about Snow White is wonderful.  I enjoyed the three-times-a-loser tale of how the old woman comes to the cottage three days in a row, dressed differently with three different fatal items for "the maid."  The twist on the "true love's kiss" was interesting, and I loved how he drilled the holes in the glass coffin and left her for someone else!
Michael Mullin is a clever and creative writer.  I hope to see more from him! 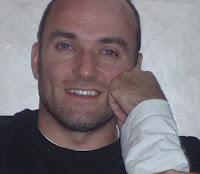 Michael grew up in , where all his sports allegiances remain. He is co-author of the successful Larry Gets Lost picture book series, and was recognized by the WGA’s Written By magazine for an animation screenplay. Before writing as a career, he taught preschool and college, two positions he found disconcertingly similar. He lives in with his wife and 10-year-old twins who pretty much run his life (despite his best efforts to appear as if he is running theirs).
Posted by Beverly at 5:00 AM 2 comments