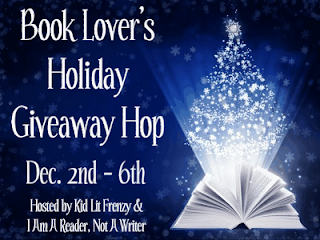 This Giveaway Hop is hosted by I Am A Reader, Not A Writer and Kid Lit Frenzy!
You can get to the entire Hop linky by clicking HERE.
I am stop 178 on the tour!
#177 is Sugarbeats Books (US/Can) and #179 is Living, Learning, and Loving Life (US)
To enter this giveaway please be a follower and fill out the form below!
Good luck to all and thanks following and entering!!!
Posted by Beverly at 11:59 PM 3 comments 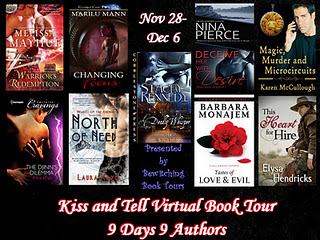 This 9 day, 9 author virtual book tour is presented by Bewitching Book Tours.
You can see the tour schedule by clicking HERE.
Welcome to The Wormhole and the Kiss and Tell Tour!
It is my honor to present Melissa Mayhue!
Warrior's Redemption by Melissa Mayhue

MALCOLM MACDOWYLT sees himself a failed warrior, haunted by the death of the woman he married to become laird of Clain MacGahan. Neither his Viking heritage nor his claim to descend from Norse gods can restore his confidence in his ability to protect his people. His sister is held captive, her life in jeopardy, and his Magically powerful half brother wants him dead. The last thing he needs is more responsibility, but that's exactly what he gets when his Faerie mother-in-law arrives seeking justice for her daughter in the form of an enticing woman from seven hundred years in the future.
DANIELLE DEARMON has waited fifteen years to discover the life she is supposed to live. She just never dreamed she'd end up in the thirteenth century with a handsome Scot bent on saving everyone but himself.
With the lives of those most dear to him hanging in the balance, Malcolm sets out to battle a powerful evil magic, only to learn that the redemption he seeks exists in the arms of the woman he loves.

MELISSA MAYHUE began her writing career in 2005 after a vacation to and a hike on the Black Isle inspired her with the perfect setting for the characters running around in her head.  Her resulting debut novel, THIRTY NIGHTS WITH A HUSBAND, won the Holt Medallion and Book Buyers Best awards in 2008 and made the finals of the Colorado Book Awards.
Since then, her imaginary world of Faeries and Mortals has continued to grow.  A HIGHLANDER’S HOMECOMING, sixth book in her award-winning Daughters of the Glen series from Pocket Books, was a 2011 RITA finalist in the Paranormal Category.  WARRIOR’S REDEMPTION, her ninth book, is due out December 27, 2011.
Married and the mother of three sons, Melissa lives in beautiful with her family and two very spoiled Boston Terriers.
You can visit her on the web at:  www.MelissaMayhue.com
BUY LINKS:
http://www.amazon.com/Warriors-Redemption-Melissa-Mayhue/dp/1451640870/ref=sr_1_1?ie=UTF8&qid=1320640707&sr=8-1
http://www.barnesandnoble.com/w/warriors-redemption-melissa-mayhue/1101913999?ean=9781451640878&itm=1&usri=warrior27s%252bredemption
WEB LINKS:
www.MelissaMayhue.com
SOCIAL MEDIA:
Twitter:  @MelissaMayhue
Facebook:   http://www.facebook.com/#!/Melissa.Mayhue.Author

Kiss and Tell Tour: Elysa Hendricks and This Heart for Hire 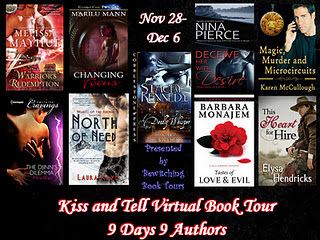 This 9 day, 9 author virtual book tour is presented by Bewitching Book Tours.
You can see the tour schedule by clicking HERE.
Welcome to The Wormhole and my day on the tour.
It is my great pleasure to present Elysa Hendricks and
This Heart for Hire.

This Heart for Hire by Elysa Hendricks~
Abandoned by his father and betrayed by his half-brother and fiancee on the eve of his wedding, JAKE GALLAGHER no longer believes in love.  Though he longs to go home, his undercover work for the Texas Rangers keeps him in a lawless border town.  Even though it jeopardizes his mission he refuses to stand by and watch outlaws rape and murder a young woman.  Getting shot and losing his memory wasn't part of his plan.

While fleeing from her stepfather's plans to steal their ranch, CHRISTINA GOODWIN witnesses her brother's murder and is left in the hands of a merciless band of outlaws.  Raised in a strict convent, Christina has little knowledge of men or the world, its dangers and temptations.
Frightened and alone, she is forced to accept the help of the dark gunslinger who rescues her.  Though drawn to Jake's potent masculinity, she hesitates to trust him, fearing her stepfather has sent him to bring her back.  Unsure of Jake's motives for helping her, she struggles against him, determined to find a way to avenge her brother's death and regain control of her ranch from her stepfather. 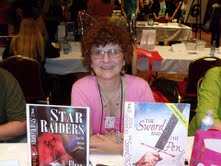 Elysa Hendricks - Author info:
After trying her hand at a variety of careers: retail sales, insurance underwriter, video store owner, home day care provider, and motherhood, Elysa Hendricks, a longtime reader of romance, sat down to write a short contemporary romance. When her heroine turned out to be a winged, telepathic alien, Elysa decided she enjoyed writing stories set in different places and times.  Fortunately for the reading public that book remains hidden under her bed along with the evil killer dust bunnies.
After spending some time (longer than she cares to remember or tell) learning how to write she then penned a series of fantasy romances. GEMINI MOON, CRYSTAL MOON, SHADOW MOON and FORBIDDEN MOON are available from ImaJinn Books.
THIS HEART FOR HIRE is the first of two books set in 1870's west where a convent reared innocent and a gunslinger with no memory struggle to survive and find love while crossing the dangerous west frontier.
With THE BABY RACE and COUNTERFEIT LOVE Elysa penned two short contemporary love stories set in the real world of small town .
While living in she helped found the Windy City Chapter and the Futuristic, Fantasy & Paranormal Chapters of Romance Writers of America as well as taught  workshops on writing at writer's conferences and at local community colleges. Recently relocated to central she's happy to be part of the Central Ohio Fiction Writer family. Someday she dreams of writing on a laptop while sitting on a tropical beach.
...and to fill your reading preview need...
THIS HEART FOR HIRE
First Kiss Scene
"You did just fine. I'm living proof." Jake watched with pleasure as a smile lit up her face. He returned it. "Tell me how your brother came to hire me? Where we met? Maybe you can help jog my memory."
A panicked looked crossed her face and she went suddenly pale. "I-I, w-we..." Her gaze darted around refusing to settle on him. Then with an audible breath she regained control. "I'm not sure how or where Christopher met you. He never said. I was staying in, um, in Ramblin waiting for him. He brought you there and we headed out for ."
Jake listened to the girl's lies. Like before, she didn't do it well. Her nervous plucking at her skirt and the way her gaze avoided his gave her away. "If we met in Ramblin for me to guide you north to , how did we end up in Peaceful which is southeast?"
Color crept into her cheeks as she stared at him in horror. "You remember?"
For some reason she didn't want him to remember, which made him more determined to do so. "No, but I know where Peaceful is and it isn't on the way to from Ramblin. So how did we end up there?"
"You had some business there." Her chin came up, but her eyes didn't quite meet his. "I don't know what it was. You didn't say. But that's where Christopher died. Can we not talk about this anymore? Please." Her voice broke on the last word and she bent her head to hide the tears he saw gathering in her eyes.
As much as he needed the truth, he found himself unwilling to push her. Her tears softened the hard knot of anger inside him.
A tendril of hair fell forward across her face and he reached out to brush it away. His knuckles touched the tender skin of her cheek and lingered. She looked up with startled eyes, her lips parted in question. Her lies forgotten, his gaze locked with hers. He caressed her face then threaded his fingers through her hair. Like silk it flowed over his hands.
Cupping the back of her head in his hand, he leaned toward her. The tempo of her pulse increased beneath his fingertips. Her breathing grew shallow and her eyelids fluttered shut. At his gentle tug, she swayed into him. His other arm went around her back and pulled her into his embrace. With a soft sigh she surrendered to his caress. Without hesitation he slanted his lips across hers.
Sensations swamped him, his own hot, pounding hunger and her sweet, warm yielding. His arms tightened as he deepened the kiss. With a gentle probe he urged her lips apart. After a slight hesitation, she allowed him entrance and his tongue explored the moist recesses of her mouth.
Take it slow, gentle, Jake warned himself. One hand massaged the small of her back and molded her slim frame to his harder one. The other anchored her head so she could not escape his kiss, even though she showed no signs of wishing to. With difficulty he held his passion in check.
He filled his nostrils with her scent, the smell of warm, willing woman. Pulling his lips from hers he buried his face in her hair and struggled to control his desire.
"So sweet, so soft," he whispered. "Do you know how I want you?"
How he longed to strip her of her clothing. The urge to lay her in the fragrant grass and drown in her velvet warmth beat like a drum in his blood.
Her hands clutched his shoulders, her fingers kneading his flesh as she pressed herself against him. Her lips sought his. She whimpered when he pulled back.
"Slow and easy, Kitten."
Posted by Beverly at 5:00 AM 2 comments

Amazon Product Description:
A powerful wizard with a physics degree and a checkered past invents a shield to ensure he'll never again be tortured almost to death.

The wizarding powers-that-be fear the repercussions of such a device and send his former girlfriend, an accomplished wizard herself, to retrieve the device or destroy it.

When the shield is stolen by the magical mafia, Ilene McConnell and Michael Morgan have to set aside their differences and work together to recover it. Michael claims he needs the device as insurance against the kind of injury and injustice he suffered once before. Ilene maintains its potential to upset the delicate balance of power makes it too dangerous and that it needs to be destroyed. But none of that will matter if they can't prevent a powerful rogue wizard from using the shield for his own purposes.
My thoughts:
I truly enjoyed this book.  The characters are wonderful.  Michael is the all-around good guy, gone bad, but on his way back around and Ilene is the broken-hearted girl trying to make it on her own despite never getting over her lost love.  They are great as individual characters, but fantastic together.
The storyline is original and well done.  The descriptions are vivid and I love the new twist on magic.  The science behind the magic is great.  The plot is clever and creative.  The book is well written and nicely paced.
There is a load of emotion coursing through the entire story.  We get love and anger, betrayal and mistrust, all mixed together with desire, longing, magic, and of course shifting balance - - on so many levels!
Posted by Beverly at 1:25 AM 0 comments