After narrowly escaping the serial killer out to steal her soul, Bridget dreams of a drama-free Junior year at Hartfield Manor.  But going to school with other teenage mind-readers is beyond complicated.  The headmaster greets Bridget with an alarming warning, the Coven is plotting something sinister, and Bridget's caught the eye of the hottest guy at Hartfield.  Suddenly one psychotic soul-sucker doesn't seem like such a big deal.

And then there's her ex-boyfriend Terrence.  Bars aren't enough to keep him away.

Excerpt from Chapter Three - The Outcast
"Welcome Bridget," the Professor said as I stepped inside. Her voice was the one that had invited me in. "I'm Professor Karan." She smiled, adjusting her black-framed glasses. Her dark skin popped underneath her white blouse and khaki slacks. Her jet black hair was tied up in a bun and her opalescent teeth looked a little too big for her mouth. Good thing she couldn't hear that last one.
"Class," she continued. "This is Bridget from the states." I half-smiled and concentrated on keeping my cheeks tan instead of bright pink. I rubbed my fingers together as I stared at my quiet classmates - all with empty heads.A level playing field. A dozen blank faces stared back at me. "Go ahead and have a seat right there." She pointed to an open desk near the window.
I quietly sat down - my chest pounding as eyes followed me to my seat. I looked up, half-smiling again. A girl next to me with auburn hair and sparkly eyelids smiled back. My heartbeat quickened when I caught sight of the guy next to her - sturdy arms and gelled hair. I'm Tamsin, the girl said in her head. She pushed her thoughts towards me and continued smiling.
"Okay," Professor Karan announced. "How about we finish our little discussion? How does one spot a Coven member?"
"Easy," the guy next to Tamsin blurted out. "They try to kill you." The entire class laughed apart from a guy in the corner who had moved his desk away from the others. His head was in his hands and his hair looked like one giant mop. I raised my eyebrows, staring as he raised his chin just long enough to open his mouth.
"Blocked minds and irregular thought patterns," he sighed. He sat up rolling his eyes and reached into his pocket. His mind felt different than the others. It was almost like it emitted pulses of electricity.
"Uh Dylan," Professor Karan scolded. "What did I say about ciggies in the classroom?"
"You didn't," he replied as he propped a cigarette in his mouth and felt around for a lighter.
"Well I'm saying it now. Put it away."
Dosser, the guy next to Tamsin thought. The whole class giggled. Dylan let out a breath as he scratched his messy black hair.

Right now you can get this one for $2.99 by clicking HERE. 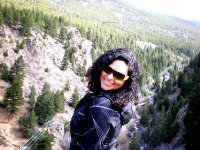 Click HERE to read my review of book one - Thoughtless.

Thoughtless (book one) by Jacqueline Gardner

Amazon Product Description:
When Bridget finds a dead cheerleader in the janitor’s closet, she becomes the killer’s next target. High school just got worse. It’s bad enough that she can hear the shocking truths that pass through her classmate’s heads. Now she has to worry about staying alive, and all clues point to the one person whose thoughts she can’t read - her boyfriend Terrence. Someone is taunting her, threatening to expose her secret. And when Bridget tries to single out her blackmailer, she’s nearly beaten to death by a mind controlled minion with fiery eyes. But when Bridget finally comes face-to-face with the killer, suddenly a horde of brainwashed students programmed to destroy her life doesn’t seem so bad.

It is currently being offered HERE at no charge! Don't miss out!!!