Blog Tour: A Warrior's Witch by Stacey Kennedy (giveaway too!!!) 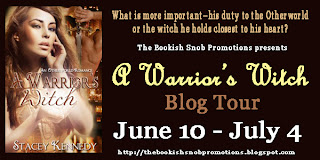 Welcome to TheWormhole and my stop on the
A Warrior's Witch Blog Tour
You can check out my review HERE!

Hugs go out to The Wormhole for sharing her space today to celebrate my new release, A Warrior’s Witch. And what a better way to do that than hold a giveaway!! If witches, vampires, guardians, and danger is your thing—all wrapped up in a steamy romance, please fill out the form below to enter. The prize is a backlist book from Stacey Kennedy.

Decades old guilt collide with a murder, igniting a battle in a warrior’s soul to choose between love and duty…
Excerpt: