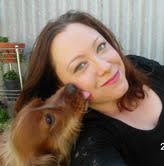 My Thoughts:
Nicely written.  The characters and the setting come alive with the author's vivid imagination and descriptive language.  The characters are not created flawless - which makes them all the more real as teens in high school.  The idea is a bit of a twist for a shifter/werewolf story - which is refreshing.  Well worth the read.
Posted by Beverly at 2:30 AM 5 comments