Welcome to The Wormhole!
It is with great pleasure that I host author Melissa McPhail. 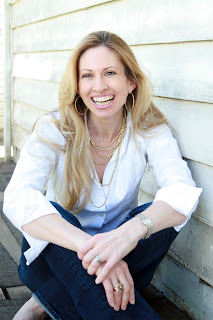 When did you first realize you wanted to be a writer? I started writing as a child with poetry, but my love of writing blossomed at the boarding school where I attended high school. Regularly escaping to the quiet (and mostly deserted) sanctum of the computer lab, I discovered the joy of creating my own world, and I spent many nights and weekends exploring my imagination.
How many jobs did you have before you became a writer? I still have more jobs than I can count! Writing has always been a parallel to my other lives. It's an inseparable part of me.
How long does it take you to write a book? This is a loaded question. I can complete a manuscript in a year or so, but that doesn't necessarily mean it's ready to go to print. I rewrote my first novel completely at least seven times, and there were other major re-writes in addition to those times, when all but a single chapter was tossed.
I believe epic fantasy fans are some of the most intelligent people around. They expect a certain level of complexity and scope, and if you as the author can't keep them tied up in mysteries throughout a story arc that spans multiple books, you'd do well to choose an easier genre. It took me a decade of rewrites to develop a storyline with the complexity and breadth of scope to meet the demands of this very discriminating audience.
What would you say is your most interesting writing quirk? Being such a closet nerd. My husband and I have a to-scale Nazgul in our movie room, and he's one of the more benign items.
Where do you get your ideas or inspiration for your characters? I am ever inspired by the world around me. For all that I feel that I'm only in it about forty percent of the time (the other sixty percent spent in my own world), I get a lot of mileage out of that forty percent.
Sometimes I create a character with a specific purpose in mind, but often my characters grow more organically; the story or scene will take on a life of its own, and I seem to merely be channeling their experience from elsewhere. There have been people who inspired certain characters, but most of my characters originate from a need to express a new idea or viewpoint into the story. I don't sit down and design characters to fit the story around. The story unfolds, and sometimes I'm as surprised as the reader by the new characters I meet along the way.
How do you decide what you want to write about? My series A Pattern of Shadow & Light has a four-book story arc, so I have a clear idea of where we're heading overall. Since each book is a continuation of the same thread, I am merely continuing forward in the logical path of events. Often, it feels as though the story is already written, and it's more remembering than creating.
What books have most influenced your life? My earliest influence was the Chronicles of Narnia, which my grandmother read to me as a child. This series engendered a love of all things magical and wakened me to the idea that there is a little bit of magic in every part of life.
In high school, I was profoundly influenced by Ayn Rand's Atlas Shrugged. I left Galt's Gulch behind in the story feeling a grave loss and wondering if I might ever find such people as inhabited his utopia in my own life. This feeling inspired me to write, actually, for what better way to find incomparable people than to create them in the world of your imagination? I think most writers must surely run around with a host of imaginary friends in their heads at any given time.
What are you reading right now? I'm reading Fifty Shades of Grey by EL James. It's not my usual genre, but I'm intrigued by the way the author introduces a taboo subject into mainstream fiction.
What do you like to do when you are not writing? I'm obviously an avid reader. I'm also a yoga instructor, and keeping a regular personal practice is important to me. When not doing one of these three things, I love seeking new adventures with my twin daughters.
What is your favorite comfort food? I am remarkably fond of custards of any kind, and being from the South, I have a particular weakness for cornbread.
What do you think makes a good story? Unforgettable characters. I can enjoy a story with even a middling plot if the characters are engaging. As in life, it's not the activity but the company that makes an outing remarkable.
Who would you consider your favorite author and why? This is so hard! My favorite book, favorite character, favorite author and favorite story are all different.
I am ever amazed at the brilliance of Victor Hugo's imagery. Les Miserables ranks as one of my favorite books of all time. If we were to determine a favorite author by the number of their books that I've read, then we'd have to look to Robert Ludlum or Clive Cussler - both of whom were/are prolific, and I've read all of their work. Probably my favorite character in fantasy fiction (outside of my own characters) is Karen Marie Moning's Jericho Barrons, yet the author who has most moved me in recent years with her glorious writing, the scope of the story, and a brilliant heroine is Jacqueline Carey with the Kushiel Series.
Fun random questions:
• dogs or cats? Cats - definitely.
• Coffee or tea? - The world does not turn without tea.
• Dark or milk chocolate? Dark chocolate - the darkest. I love Theo's 91%.
Her book Cephrael's Hand : 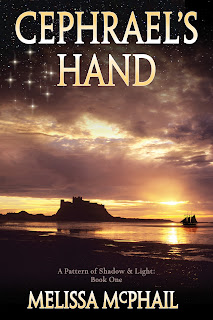 Amazon Product Description:
"All things are composed of patterns..." And within the pattern of the realm of Alorin, three strands must cross:

In Alorin... three hundred years after the genocidal Adept Wars, the realm is dying, and the blessed Adept race dies with it. One man holds the secret to reverting this decline: Bjorn van Gelderan, a dangerous and enigmatic man whose shocking betrayal three centuries past earned him a traitor's brand. It is the Adept Vestal Raine D'Lacourte's mission to learn what Bjorn knows in the hope of salvaging his race. But first he'll have to find him.

In the kingdom of Dannym... the young Prince Ean val Lorian faces a tenuous future as the last living heir to the coveted Eagle Throne. When his blood-brother is slain during a failed assassination, Ean embarks on a desperate hunt for the man responsible. Yet his advisors have their own agendas, and his quest for vengeance leads him ever deeper into a sinuous plot masterminded by a mysterious and powerful man, the one they call First Lord.

In the Nadori desert...tormented by the missing pieces of his life, a soldier named Trell heads off to uncover the truth of his shadowed past. But when disaster places him in the debt of Wildlings sworn to the First Lord, Trell begins to suspect a deadlier, darker secret motivating them. Honor-bound to serve the First Lord in return for his life, Trell continues on his appointed path, yet each day unveils new and stranger secrets that eventually call into question everything he knows.
Show More
Show Less
You can buy a copy by clicking HERE.
﻿
Posted by Beverly at 5:00 AM 1 comments