Publication Day! Over My Live Body by Susan Israel 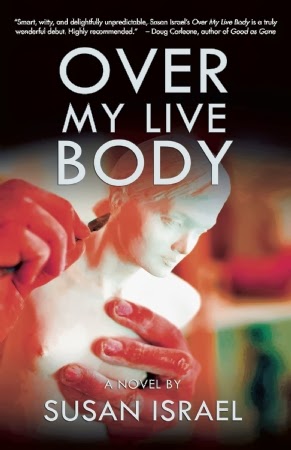 Happy book birthday to Over My Live Body and author Susan Israel.

Delilah is accustomed to people seeing her naked. As a nude model – a gig that keeps food on the table while her career as a sculptor takes off – it comes with the territory.

But Delilah has never before felt this vulnerable.

Because Delilah has an admirer. Someone who is paying a great deal of attention to her. And he just might love her to death.


The debut of a shockingly fresh voice in suspense fiction, OVER MY LIVE BODY will work its way inside of you.

I’ve gone from posing in one studio to posing in another in less than an hour. Ordinarily I don’t complain about the cold. I don’t move before I’m told to. I try to be the model I’ve never had the good luck to hire. But today I feel like I’m lugging around a portfolio of hypersensitivity along with my usual artist supplies and it’s not even justified. Here, I’m among friends.

The instructor of this class has drawn a chalk outline of where I’m supposed to lie and indicates the pose she wants me to strike, that of a classic come-to-my-casbah odalisque. I feel my calf muscles tighten as I scrunch up into the framework of the drawing on the floor. There are no new faces in this class, no surprises, I’ll be forgiven if I twitch or scratch an itch. Morgan, one of the best artists and my best friend, has brought poppy seed pound cake and stops what he’s doing to tiptoe over and feed me morsels of it. “Should be grapes,” the instructor says. Someone down the hall is playing Carmen on a boom box. “Should be Scheherezade,” Morgan says, winking at me.

The wink isn’t misunderstood, wouldn’t be even if Morgan wasn’t gay.
We artists are like a cast ensemble in repertory. Many of us have seen each other nude in classes. I’m dressed in the part I’m playing. It’s when I change locations, freelance in other schools, that I’ve felt uncomfortable and I’ve tried not to do that too often. I try not to, but sometimes I need the money to buy extra supplies or pay off mounting bills and I have to do it, like I did last night. I sometimes say never again, never again! What do I need this aggravation for? I feel smarmy; it makes me fight with Ivan more. Except, like a new enrollee in some 12-step program, I’m learning to recognize what I have and haven’t the power to change and ironically now that I’ve decided to kick Ivan and his half of the rent money out, I’m going to have to pay more bills than ever, starting with the new lock I’m having installed.

I look down and see my arm and leg protruding from the smeared outline marking where they’re supposed to be. “I’m sorry.”

“Delilah rarely strays,” Morgan says with a smile, holding a pencil up to me to gauge the span of my body stretched out in front of faded brocade. Another artist, Keith, moves in for a closer look, so close that I can smell the eucalyptus cough drop lodged in his cheek that I first thought was an abscess.
The others take turns approaching me, walking around me, appraising me with the dispassionate curiosity they would exhibit while looking at a piece on display in a retrospective at the Museum of Modern Art. The instructor, their tour guide, calls attention to my posterior as the center of gravity upon which all else rests. She points to my right shoulder with a well-sharpened Conté crayon and lightly touches it, then moves on to the sole of my right foot. My toes curl. “Notice how the light is distributed here and here, how opalescent these areas seem compared to this.” I feel the pencil glide along the base of my spine. “I want you to pay attention to these tonal differences in your drawings as if you were painting them because you will be.”

The door bangs open suddenly, unexpectedly; no one casually walks in and out of this studio. “Phone call downstairs for Delilah,” someone hollers, retreating down the hall.

“She can`t come to the phone right now,” the instructor bellows back. “Take a message.”

One of the graphic arts students backs into the studio and looks around furtively, like one more step and she`ll be accused of breaking and entering. “He said he`d call back.”

“Another member of your burgeoning fan club, Delilah. Maybe someone who’s seen your exhibits and wants to buy all your sculptures,” Morgan suggests, smudging the charcoal on the page with the heel of his hand.

I know it was Ivan on the phone. He’s the only person who has ever called me here. I can feel his heavy breathing impatience wafting all the way up from Wall Street. He knows a call from him will unsettle me, make me put my clothes on to rush to the phone at the very least and not be able to get back into the right pose and the right mood afterwards. He gets off on this. I`m not taking any calls until I`m through for the day.

“Delilah!” someone else calls. “Telephone!”

“It’s okay, take a five minute break, you’re marked,” the instructor says as I scramble to my feet clumsily. I grab a blue-and-white pinstriped man’s shirt from the back of Morgan’s easel and throw it on and pad down the cold corridor and down the stairs, pulling the shirt closed around me, grumbling, steeling myself for what I have to say to him and that is, “Leave me alone!”

“Is that any way to answer the phone?”

I look down at the way I’m dressed. Is that any way to answer the phone? “Who is this?” It’s not Ivan’s voice. He’s the only person who has ever called me here, but it’s not him. Someone he put up to calling me, though, I’m sure of it, one of his co-workers wearing an oxford shirt not unlike the one that I’ve got wrapped around me like a toga, only fully buttoned down and fit to be tied. “Get him to come to the phone.”

“You don’t want to talk to anyone else,” the voice declares. “It’s me you want.”