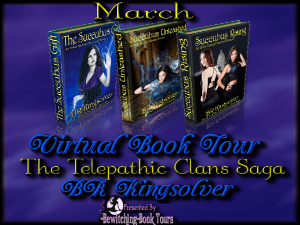 Welcome to The Wormhole and my second day on the tour.
It is my pleasure to host book two of the Telepathic Clans.

The author has joined us for an interview:
Where did you find the inspiration to write The Telepathic Clans Saga?
When I started thinking about what kind of character could be strong, kick-ass, and blatantly sexual while still being one of the good guys.

I started researching paranormal "powers", and managed to put together a coherent list of talents and myths people have envisioned through the centuries. One of the myths I find particularly humorous is that of the succubus. The medieval church used that myth to demonize sexual women.  I thought about the idea of a different kind of succubus, a telepath who could drain a man’s life energy, but wasn’t aligned with the devil, and didn’t do him permanent harm.

What do you usually do when you’re not writing?
Right now, I just started a new job and I’m working a lot of hours. That’s why the third book took so long to finish. Over the past four years, I’ve renovated a 100-year-old row house in , doing much of the work myself. I like to travel and see new places, hike and ski. My two basset hounds like the hiking part most of all.

Are you working on any new projects at the moment?
I have two projects I’ve started. One is a paranormal mystery/thriller set in the Telepathic Clans’ world with a telepathic s detective. The other is a YA or New Adult paranormal romance in a completely different setting. The main character in that book is a Valkyrie going to university at . Eventually, I need to write the fourth book to finish Brenna and Rebecca’s story, but I have to get away from that world for awhile.


More About the author:

I made silver and turquoise jewelry for almost a decade, ended up in nursing school, then took a master’s in business. Along the way I worked in construction, as a newspaper editor, a teacher, and somehow found a career working with computers.

Book Description:
It's not easy being a succubus.

After a crash course in learning about her genetic heritage, Brenna O'Donnell has discovered what it really means to be a succubus and has learned to embrace her strange Gift. Her major concern is whether Collin will accept her for what she is. As she adjusts to telepathic society, others in the Clan have plans that will strip the last of her freedom. Rival Clans still hunt succubi, and discovering their dark motives is paramount.

The social season is also around the corner, including events that Brenna never imagined in her wildest dreams. The succubi, representatives of the Goddess on earth, are at the center of an ancient worship. And if a girl is going to be the center of attention, then obviously she needs a new dress.

My thoughts:
Fantastic story.  We jump right back into Brenna's world without missing a beat.  Brenna has embraced her new life and gifts and is better than ever.  Collin is fabulous (are there really men similar - even without the "gifts"?
The story brings us more into the lifestyle and lives of the clan and its ways and workings.  We meet new characters but get to have our favorites from book one back too.
As action packed and edge of the seat as book one, this is a great second book, but could easily stand alone - don't miss this great story.  I can't wait for book three.
Posted by Beverly at 5:00 AM 0 comments