Nothing in life is free. Turns out, nothing in the afterlife is, either.


When recently-deceased Irene Dunphy decided to “follow the light,” she thought she’d end up in Heaven or Hell and her journey would be over.

Boy, was she wrong.

She soon finds that “the other side” isn’t a final destination but a kind of purgatory where billions of spirits are stuck, with no way to move forward or back. Even worse, deranged phantoms known as “Hungry Ghosts” stalk the dead, intent on destroying them. The only way out is for Irene to forget her life on earth—including the boy who risked everything to help her cross over—which she’s not about to do.

As Irene desperately searches for an alternative, help unexpectedly comes in the unlikeliest of forms: a twelfth-century Spanish knight and a nineteenth-century American cowboy. Even more surprising, one offers a chance for redemption; the other, love. Unfortunately, she won’t be able to have either if she can’t find a way to escape the hellish limbo where they’re all trapped.


“Not another one!” she cried. She dropped her bag and took off at a run. “Hey!” she shouted, frantically motioning for the man to move away from the water. “Get away from there! Stop! Hey! Hey, you!”

The man turned, and his face was a mixture of surprise and confusion, which shifted to full-out astonishment as Irene barreled into him. Her momentum carried them sideways, and they landed in a spray of sand, safely away from the water’s edge, him on his back and her on top of him.

About the Author
Terri Bruce has been making up adventure stories for as long as she can remember and won her first writing award when she was twelve. Like Anne Shirley, she prefers to make people cry rather than laugh, but is happy if she can do either. She produces fantasy and adventure stories from a haunted house in New England where she lives with her husband and three cats. Her second novel, Thereafter (Afterlife #2), was released June 1, 2013.
Contact Details:  Email: tbruce@terribruce.net, Website/Blog: www.terribruce.net, Goodreads: www.goodreads.com/TerriBruce, Facebook: http://www.facebook.com/authorterribruce, Twitter: @_TerriBruce 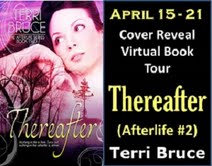 Author Terri Bruce is celebrating the upcoming release of Thereafter, the second book in the Afterlife Series, with a scavenger hunt/giveaway! One Grand Prize winner will receive a set of 20” x 30” unframed cover art posters (1 each for Hereafter and Thereafter), signed by the author, and an eARC of Thereafter! Five first place winners will receive eARCs of Thereafter. Contest is open internationally. As a special bonus, everyone who enters the contest will receive, via email, a special sneak-peak excerpt of Thereafter, featuring Terri’s favorite scene!

2. At each stop, there is an excerpt from Thereafter with a word highlighted in red

3. Collect all fourteen of these highlighted words and arrange them into a fourteen-word sentence that reveals a major plot point of Thereafter

4. Email the sentence and your name to Contest@terribruce.net

5. Then enter via Rafflecopter to confirm that you emailed in your contest entry

6. Additional bonus entries for joining Terri’s mailing list, tweeting about the giveaway, and shelving Thereafter on Goodreads will become available once you have completed the main entry

THEREAFTER (Afterlife #2) Nothing in life is free. Turns out, nothing in the afterlife is, either. Coming June 1, 2013 from Eternal Press.
Goodreads
HEREAFTER (Afterlife #1)
a contemporary fantasy about life, death, and everything in between. Available everywhere books are sold.
Amazon | B&N | Goodreads
Author Terri Bruce
author of fantasy and science fiction stories with a literary bent
Website | Facebook | Facebook Fan Page | Twitter
Posted by Beverly at 5:00 AM 1 comments

Review: Red is for Rage by Connie Corcoran Wilson

Red is for Rage by Connie Corcoran Wilson

RED IS FOR RAGE is the second book in the award-winning THE COLOR OF EVIL series by Connie (Corcoran) Wilson. THE COLOR OF EVIL won the E-Lit Gold Medal for Horror (Jenkins Group), and the Silver Feather (IWPA). In Book Two, we learn more about the exact nature of Tad’s paranormal power, Tetrachromatic Super Vision. Can this keen sight help Tad find Stevie Scranton? Will Tad suffer another breakdown from reliving the crimes of serial killer Michael Clay (aka, Pogo, the Killer Clown), as he did when only eight years old? Can Tad learn to harness his special sight to help his loved ones? When Stevie Scranton goes missing, best friend Tad vows to do everything he can to find him. Even if Stevie is dead, Sally and Earl Scranton, (his parents), and Shannon, (Stevie’s older sister), crave closure. Tad enlists the help of retired policeman Charlie Chandler and a team of volunteers, including Charlie’s old partner, Evelyn Hoeflinger. This rag-tag team of detectives continues searching for Stevie Scranton, the runty misfit of Cedar Falls’ Sky High. In their search, they discover a monster every bit as dangerous as Pogo and must confront him in order to save Stevie. Tad sees auras around others that tell him whether they are good or evil. The truly evil are surrounded by a khaki aura (THE COLOR OF EVIL). At night, Tad suffers vivid nightmares that depict the crimes of the evil-doers. Michael Clay (the serial killer Pogo) escapes custody. On the loose again, Pogo’s actions restart the vicious cycle of violent nightmares. Pogo poses a threat to the entire town of Cedar Falls, but he is especially a threat to Tad McGreevy. Pogo has one main goal: kill Tad McGreevy so that Tad cannot disclose Clay’s location. Pogo doesn’t realize that, up until now, Tad has been unable to harness the paranormal ability he possesses. Now, Tad McGreevy must try to learn to use his unique gift. Stevie Scranton’s fate hangs in the balance. Tad’s power, if precognitive, could save everyone he loves. Jenny SanGiovanni returns from her father’s home in Boulder, Colorado, to finish her senior year with her old classmates. She brings home a new set of problems. Jeremy Gustaffsson, the fifth-year senior boyfriend in Jenny’s junior year, graduated. But Jeremy is still in town, still obsessed with Jenny, still dangerous. When Jenny broke up with Jeremy, it made Jeremy mad. Bad things happen to good people when Jeremy Gustaffsson gets angry and descends into a red rage. All Jenny’s cheerleader friends from her junior year are back. Many, like Janice Kramer, Heather Crompton and Melody Harris, have problems of their own. Jenny deals with adolescent issues such as self-esteem and self-worth, problems that tax her soul. But Jenny is not alone. Another Sky High student is driven to the brink. Will that individual plunge into the abyss of despair? And what of the adults? What has the stress of Stevie’s nine-month ordeal done to Earl and Sally Scranton’s marriage? What problems confront the other adults in Cedar Falls as three evil-doers rise up to create chaos and do them harm? RED IS FOR RAGE and rage runs rampant in this small Iowa town in the year of our Lord 2004.
My thoughts:
Once again Connie has grabbed readers with her twisted tale of the human monster.  This story takes up where The Color of Evil left off and doesn't stop even at the end.  We see the same characters from the first book back and bigger than ever.  Tad is a stellar character once again.  The story touches on so much of the ugliness and discontentment of the lives of people and brings an awareness to issues that most try to believe aren't happening.  It is an emotional roller coaster and an edge of the seat trip through a small town and the evil that lurks there.  A great addition to the series, can't wait for the next book.
Posted by Beverly at 3:00 AM 0 comments