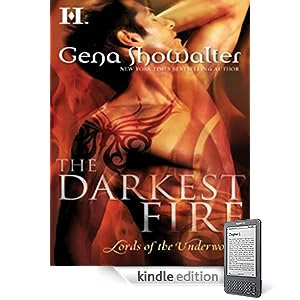 Amazon Product Description:
He is the guardian of hell, more monster than man. She is the goddess of oppression, more angel than woman. Together they will enter the flames to battle a dangerous horde of demon lords -- and discover a passion unlike any other.... Don’t miss this sizzling prequel to Gena Showalter's breathtaking new paranormal series, The Lords of the Underworld! Though they carry an eternal curse, the Lords of the Underworld are irresistibly seductive -- and unimaginably powerful.... “Showalter at her finest.” --New York Times bestselling author Karen Marie Moning on The Darkest Night.


My thoughts:
Since I signed up for the Lords of the Underworld Challenge I decided I might as well start with the prequel and go from there.  This was my first Gena Showalter (even though one of my friends lives and breathes Lords of the Underworld - I had yet to try one).  I was not disappointed.  I don't know if anything could have lived up to what this series had been built to by my friend, but I enjoyed the story but would liked for it to have been longer.
I think that this story would easily stand alone, but I believe that it was a great place to start and to get some of the background for the series.


I liked the characters, Kadence and Geryon, he is the guardian to the gates of hell and she is the goddess of Oppression.  They have loved each other from afar and finally one day she speaks to him.  From their first conversation their journey begins and as they travel and spend time together finally admit their love for one another.  It's a bit like beauty and the beast in a way.  I won't spoil it for you by telling more - -


There isn't much world building in this one - as they reside in hell, but she does a nice job on the descriptions of the other inhabitants and the surroundings.


At the very end of the story the gods realize that the wall between Earth and Hell has been breached and the Demon Lords has been loosed on Earth.  They built a box that drew, captured, and held the Demon Lords.  They gave said box to a woman named Pandora to ensure its safety.....so onto the rest of the series!