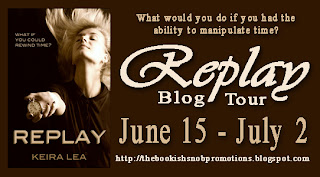 Welcome to The Wormhole and my stop on the
Replay Blog Tour!

Keira Lea released her debut novel in April 2011. She is a devoted fan of the TV show FRINGE, a card-carrying member of the Apple cult, and a mother to two human children and three feline ones. She is working on a sequel to Replay.
You can check out my review HERE!

Excerpt From Replay
by Keira Lea
I’ll admit that I’m a little disappointed that Patrick brought me to the Mediocre Theater Café for our date. Don’t get me wrong; this is, like, my place now. Almost as good as The Echo. But eating a half-stale sandwich is hardly my idea of a romantic dinner. I’m starting to realize that mediocre refers to the food, not the movies.
Well, I guess a date’s a date.
Looking Patrick in the eye is still weird for me. For months, I have tried to keep him from knowing that I was staring. When he goes to the counter to pick up our order, I focus on the movie screen so that I don’t accidentally gawk. I can’t help but to take a few peeks, though.
If I had to use only one word to describe Patrick, it would be relaxed. The guy does not seem to have a nerve in his body. As he walks between the crowded tables, he speaks to everyone he knows, pausing the right amount of time to say hi but not get caught up in a conversation. He smiles and nods at friends across the room. If I tried to do that, I would trip over a chair leg and land in someone’s lap at the precise second they try to take a sip of soup, leaving me with a faceful of broccoli and cheese.
Before Patrick returns with our food, I take a few cleansing breaths—being extra careful not to hit a breathing pattern that will trigger the chronokinesis—to stop my heart from beating so fast. On the third one, though, something goes terribly wrong, and I end up with a wicked case of hiccups. Oh, crap. A deep-breathing complication.
I hold my breath. (I think that’s what got me into this mess, though.)
Hiccup.
I try to suddenly think of the scariest thing ever. (My mother at five in the morning.)
Hiccup.
I stick my fingers in my ears. (What? I’ve heard it works.)
Hiccup.
Super crap. Okay, here’s the plan. As soon as Patrick gets back to the table, I will grab one of the water glasses and drink as much as I can. The hiccups will be washed away, and he will be none the wiser.
Hiccup. Hiccup. Hiccup. Here he comes.
“I hope these are okay. The bread looks a little dry, but you can’t get much better here. Sorry,” he says when he’s five feet away from the table. He’s balancing two sandwich plates and two glasses of water on an absurdly small tray.
I jump up and grab the water from him, almost upsetting the tray. I gulp down half of one of the glasses as he puts our plates on the table. It seems to be working. I tip up the glass for a little more just to make sure, and that’s when it happens.
An avalanche.
The ice water crashes into my face and slides down my shirt. I gasp when it hits my bare skin.
“Are you okay?” Patrick says, mopping my chest with a napkin. My flat, nonexistent, boy chest. Lovely. I keep waiting to hear, “Say, are there any new developments?” like Bill Murray says to Gilda in the Lisa Loopner sketches.
I respond with another resounding hiccup and then run to the ladies room.
Drying my shirt in front of the air dryer is an almost futile activity. Why am I such a klutzy geek? Why can’t I have just a tiny portion of Miranda’s grace? It’s no wonder Patrick never asked me out before this. I don’t even know why he took me out tonight. What I do know is that he will never do it again. As casual as he is, I’m sure he won’t risk being seen with clown girl in public again because no amount of self-ease can surmount the level of embarrassment I’m capable of producing.
After a few minutes of jabbing at the button on the dryer over and over, I realize that someone is knocking on the door. Thinking some poor girl is trying to get in while I’m standing here indulging in my little pity party, I turn around and open it.
It’s Patrick, of course. “Are you okay?” he says.
Involuntarily, I look down. The dryer did little to help my shirt. It sticks to my skin like damp newspaper. I cross my arms over my chest, not sure why I’m bothering. It’s not like he’s going to see anything that … well, anything.
“I think I’ve got a button-up shirt in my car,” he says. “You could wear it like a jacket until your shirt dries.”
“Okay, thanks,” I say, hoping he will leave before I melt into a puddle of shame on the floor.
Despite Patrick’s shirt, I start to shiver when we sit down again. In my embarrassed misery, the thought sneaks in before I can stop it: Maybe I can fix this. True, Patrick is digging into his mediocre sandwich like nothing has happened, but it’s our first date. I waited a long time for this. I want it to be perfect. A second chance is all I need.
After that day with Quinn’s unexpected change in clothes, I shouldn’t be doing this. That experience and all the others have made it clear I don’t have control over this thing yet.
You can buy a copy of Replay for $0.99 at Amazon or at Barnes and Noble

You can win a copy by filling out this form:

Thanks for stopping by!
The next stop on the tour is: June 30 –The Musings of M.D Christie 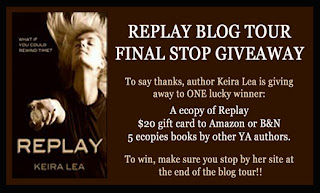