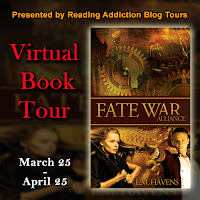 This virtual book tour is presented by Reading Addiction Blog Tours.
Click HERE for more tour information.
Welcome to The Wormhole and my stop on the tour.
It is with great pleasure that I feature:
E.M. Havens and Fate War: Alliance.

Who is E.M. Havens? I’m a lot of things. The word that seems to define me most at the moment is mom.  It can be all consuming. Not only am I a mom of three (one of them is a teenager…pity me), but I also home-school (pity me more). I share this awesome responsibility with the love of my life, best friend, and soul-mate husband.

Somewhere in there I find the time to write. I started out young writing poems, then moved on to
songs. I actually have a Bachelor in Music with a secondary in Science because I can’t stand English. Yes, the writer hates English. I like to read the story for the experience of reading the story, not to nitpick each letter and comma. But I digress.

I eventually found blogging and really enjoyed sharing my life that way. When an unfortunate turn of events separated me from my music equipment, I decided to use my overactive imagination, my love of reading, and my new found hobby, prose writing, to release some of my creative energy. I wrote my first novel and loved the experience. Fate War: Alliance is actually the second novel I wrote and the first to be published. Now I’m working on my third and several sequels to Fate War!

So that’s pretty much me, sitting in the Arbuckle Mountains of Oklahoma, reading, writing, collecting eggs from the coop, and being a schoolmarm. It’s a pretty great life.
facebook.com/thefatewar - twitter: havensem -  www.emhavenswrites.blogspot.com
BUY LINKS - Amazon


Guest Post from the author:
How to Write a Novel

1.       Daydream – It’s very important, if you want to write a novel, to live in your own little world as much as possible.  Walking around with your head in the clouds is a must. This multitasking will make writing flow much easier when you sit down to the keyboard to write.

3.       Obsess – You will probably have to do some research for your story.  Spend excessive amounts of time googling and reading Wikipedia. Then talk about your findings with everyone who will listen, and some who won’t.  They will all eventually find the subject matter as fascinating as you.  That’s what blank stares and indiscriminate nodding means…I think.

4.       Write – This may seem silly at first glance, but many would-be-authors stay that way because they never make the time to actually sit at the keyboard and start putting words on the page.  Grant it, your first words will probably suck, but that’s ok.  Your brain is a muscle…..no, no…wiki says an organ, but that screws up my analogy so let’s pretend writing is a muscle. The more you work it out, the stronger and faster it will work for you.

5.       Share – Just as you have shared your ideas and research, now it’s time to force…er…allow your family and friends to view your work.  Undoubtedly they will tell you that your novel is good, even amazing. This is not true. They don’t want to hurt your feelings. While sharing with those you know is ego building, you should also join a critique group. Not only will these folks be honest and help you identify problems in your writing, critiquing other’s work will help strengthen that writing muscle even more. You may find a local group to help you or chose from several online communities.

6.       Rewrite – Yes, now it’s time to start over.  Adding new scenes, ditching old ones, and fixing plot holes.  Then you do it again…and again…and probably again.

7.       Rejoice – Celebrate! You’re novel is done. Restart your anti-psych meds and start talking about something different so that your friends can stand to be around you.  You might even decide to try and publish it…but that can get a little crazy.

"No!" Sam screamed. A Fate boot slammed into her stomach. It pinned her, leaving her breathless. She tried desperately to push his foot off as the soldier unsheathed his sword. He raised it two handed, the razor sharp point above her throat. He would kill her. She could see it in his black, soulless eyes. "Sam!" Cole's voice was distant. The Fate would end her life if she didn't end his first.
Prince Cole's first glimpse of his bride-to-be takes place as she walks down the aisle on their wedding day. Though he is reluctant to form this union, the future king knows how much the Arboreal Lands need her dowry that promises air ships and mech defenses. Samantha appears to be the polished woman expected in a princess. However, Cole soon discovers his new wife has secrets that even she has yet to unlock. Can what's hidden in the recesses of her mind be the key to defeating the plans of the Fate Sovereign?
If you're looking for a steamy romance, a strong, smart heroine and interesting gadgets, this is the book for you! Fate War is a swords and guns, love and war, Steampunk inspired story that is sure to get your pistons pumping.
An Excerpt:


A Gift for Sam
“This is your surprise.” He gestured towards a building a few paces away from the heap of Fate mech.
“A shed?” Sam eyed him warily.
“Open the door, silly.” He placed his hand on the small of her back, and ushered her into the room. The lamp light sparkled off of her wonder filled eyes.
“How…When…” She rushed into the room, investigating in earnest. Tinker tools and supplies filled the shelves lining the walls. A work bench occupied the far end of the shed, outfitted with a large set of magnifiers.
“The Tinker in Sagewood, he wanted to retire so I bought him out and had the shop moved here. It’s yours. Of course you’re still welcome to visit me in my laboratory anytime you wish.” He gave her a courtly bow, and by the time he rose, she was on him.
Caught off guard by her advances he fell back into the workbench, toppling boxes of screws and cogs. He didn’t care because her lips found his. She bit his lip teasingly and he returned the favor. He fleetingly thought he had helped awaken more than her sense of self when her hands began tugging at his shirt.
Cole swept his hand across the work bench clearing it of various tools and boxes, sending a magnifier crashing to the ground. He spun Sam around and lifted her to the table. He stepped into her and she cradled him in her thighs. His hands found the hem of her shirt as well and he barely restrained the urge to rip it off instead of unbuttoning it. Her hands worked feverishly at his, stopping occasionally to pull his lips back to hers.
“Damn,” he cursed, getting stuck on a particularly rebellious button, and realized Sam had stopped her attentions to him. She stared at nothing with her head cocked, listening. He was about to ask her what was the matter when he heard it too, the rhythmic thrumming of an air ship.
Without a word, they quickly made themselves presentable and hurried outside. The airship was just visible, approaching over the treetops, a trail of smoke in its wake. Cole grabbed Sam’s hand and pulled her toward the lawn where they would have a better look as it flew over, on its way to the clearing.
“No.” Sam hissed. The ship’s airbladder was Perspician blue, and the ship itself was ornate enough to belong to only one passenger. “Mother.”

My thoughts:
I was impressed with this book from the first page.  The author makes magnificent word choices.  The story flows seemlessly.  If there had been nothing else I would have still enjoyed the book for that one reason alone, but there is so very much more to this story than the brilliance of the language telling it.  The characters are incredible.  They are well made, vividly described and complete with flawed personalities and emotions that make them real to the reader and easy to invest in.  The story is clever, creative and well paced.   The author doesn't shy from using tough situations or hide the bad.  She lays it all out there while the characters live it so it becomes the readers temporary reality and the pages turn.  I couldn't put it down.  Don't miss this one.