I think that some of the appeal of the on-line answer sites is the ease of not having to find the right person to ask and being able to get those answers 24/7. I also believe that part of the appeal of on-line answer sites is that a person can ask any question about anything while being anonymous.
AskMetafilter - I checked this one out first and it seems that most of the questions I see being asked are more of a personal nature - not educational. You also have to be a member to ask questions on this site, which to me makes it less useful in a school setting; and the fact that membership has to be paid for makes it unusable for young students.
ChaCha - I didn't even check this one out because cell phones and portable devices are not allowed at our school and this site is for mobile devices.
AllExperts - I like this site. I think this one could be useful to the students. I like that it has a homework help link that is divided into catagories that are broken down enough for the kids to be able to find the right area pretty fast. I don't know that they will care which person they get the answer from, but being able to ask more than one "expert" the same question is beneficial.
WikiAnswers - okay, now I guess I won't ever suggest this site to any student. I went to wikianswers.com (clicking the link on the More Things site) and asked, "Who was the 12th president of the United States of America?" and the first hit I got was about ovulation and it got detailed....not student friendly. Everything listed below my question was related to pregnancy. Not exactly what I was looking for.
Yahoo!Answers - this site is user friendly. Type a question on the line and you are given all kinds of options for the answer. I think that this site would be great for older students (middle and high school) but offers too many choices for the younger (elem) students.
Askville - this site doesn't appear to be as direct to your answers as I would be looking for - although it doesn't seem to have so many social questions.
Answerbag - this again seems to be a social networking question/answer space. I did ask the same president question and although I didn't get an inappropriate answer - I didn't get the answer I was looking for either.
Mahalo - once again - seems more social networking than educational question/answer.
folkstown - lots of twitter going on here. I think that for research and educational questions this is not the place I would send a student.
Snappyfingers - this too is not the site I would send students to for research.

Most of the questions I was seeing on the answer sites listed where not the ones I hear in the media center. Sometimes I get questions of a more personal nature, but those are usually from students who know me outside of school. I can't say that I would be comfortable handling those kinds of questions from my students; and I can't say that most of the sites that seem social network oriented would be of too much help to them in an educational setting. I don't feel that these sites are competition to the reference library. 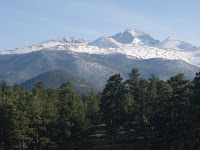 I already finished my blog on travel 2.0, but even though I said no one would be interested in my photos I still wanted to share one. I had a blast driving in the mountains. I took this picture on our way to Estes Park, Co.
Posted by Beverly at 10:39 PM 0 comments

Okay - so you can't really see my map that well - this is the 39 clues map - the journey from the first three books of the 39 clues series from Scholastic. You have to click around, zoom out a bunch to see the map. You can however click the link below labeled 39 Clues Journey, it will take you to google maps and you will be able to see my map and read about the journey. Please check it out.
View 39 Clues Journey in a larger map
Posted by Beverly at 7:32 PM 0 comments

By TwitterButtons.com
I have been working on more twitter and I don't think that I will ever tweet in any other way than just on my computer from home. I only use my cell phone when I have to and I am the world's slowest texter - so even with the limited amount of text in a twitter , it would take me too long to write it to actually make it a tweet.

I have added my name to the education directory. I took some time to see what all those educators are tweeting about. I added the twitter button above as my visual, but I wanted to add the bird from the directory page because it is so cute - not sure how - any suggestions?

Stages of twitter: I have gone through stages 1 & 2, skipped 3, but I am sure to stay here at stage 4 where I am. I don't see myself as a microblogger anytime in the near future, but the first time I looked at twitter I was at stage 1 - so we will see what we will see.

I am following LThing on twitter too - so I can now twitter my books to librarything - I don't know if I will use this feature or not.

As far as what I think twitter is? - I think that twitter is a tool that will be used a little by many, a lot by some, and none by a few. Where am I in that list? I am in the used a little catagory. I will probably check in from time to time to see what is up with the folks I am following.

Thing 30: More Ways to Use RSS and Delicious

Quick review of Thing 30 - this is actually working out great, I just went to Techspo on Monday and learned that I can add and RSS link to my club website so that parents, other teachers, and students can subscribe to our page! This is great - so I have been looking at RSS feeds and ideas about RSS for days. I have also started using delicious more now that I have it linked to my igoogle page. I have been sharing Delicious with co-workers and friends and am getting positive feedback on both fronts.
Posted by Beverly at 6:13 PM 0 comments

Thing 29 - google tools: this thing I didn't really have to review as I am still using the google calendar (which is an awesome tool - I love the email reminders) and I still get all the google alerts that I set up when I did thing 29 the first time. I like the google alerts most in that they come to my email and I am able to look at them in my own time and see what is going on.
Posted by Beverly at 6:04 PM 0 comments

Thing 28 - I chose igoogle as my customized homepage - I love it! I tell everyone how fun it is to have your own customized page. I have fractals as my background and I love seeing the different ones when I log in. Small thrills - what can I say. I have added Things to Ponder on the advice of my fellow thinger - it's sad how many times I will refresh my page to see a new ponder, yet one more time sink! I love that I can have my delicious bookmarks right there on my page with my email link and all the other stuff I like to get to fast.
Posted by Beverly at 5:57 PM 0 comments

Okay - I gave twitter another shot - I could come to like it. I has the feel of a sort if IM - but not. I am still sure that I won't have a lot of time to devote to twitter - I do like it.
Posted by Beverly at 5:46 PM 0 comments

I am going back and reviewing each of the things because it has been a month since I was on task. I have reviewed Things 24, 25, and 26 so far. I am planning to look at twitter one more time as well. I am hoping to see more this time. In review, I still love some of the original 23 things and have to go to them often and they still make me smile.
Posted by Beverly at 5:28 PM 0 comments

Summer is here - I can work on my things again!

I am so pleased that summer has finally arrived - with it, the rain - and I have time to get serious about finishing more things on a stick. Wish me luck and continue working my way through the things - some of which are going to be tricky.
Posted by Beverly at 5:02 PM 0 comments