Amazon Product Description:
Jessa is one healing away from death. Under the thrall of her gift, the Court's Senior Healer risks giving her life in exchange for her patient's.

Vale is a rebel ruler. When his brother is killed, he's given the throne and the decree from the Court to produce an heir or lose his family's hold on the land--and his deceiving advisors aren't afraid to use murder as a weapon if their directive to stay away from the Senior Healer goes unheeded.But Vale burns to possess Jessa. The heat between them leaves a wake of smoke, and even the powerful forces above want to bind them in a union that lasts forever. Vale taking another would be a betrayal neither could survive.Their enemies fear a child born of such a powerful Healer and Warrior, but the true threat lies in the bond forged in shadows and fused in fire.

My thoughts:
This is a wonderfully written story.  I am totally in love with the characters.  Vale and I had a difference of opinion and I had to set the book aside for a few days, but we are back now that he figured out that he was wrong.  Jessa is a fabulous character; although I do have a few issues with the self-sacrificing moments she had, they fit the need and the story.

I was thrilled with the Varner's idea of the aroha.  I think every woman would be thrilled to be that cherished.  This piece of the story is mysterious and I am looking forward to the next book so that I can find out more.

The world the author has created is complex and creative.  She has filled her world with a variety of magic, a host of fantastic (both good and evil)  characters, a history that is carefully constructed and strictly adhered to, and the hope and promise of more in the future.  The plot is many faceted.  There are a number of things going on all at the same time on a few different levels, but they all play out nicely in the end.

Well worth the read, can't wait to find out more in Denied - which I will hopefully finish this week. This book promotion was presented by Bewitching Book Tours.
I received this ebook in exchange for an honest review. 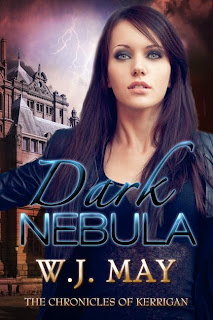 Dark Nebula is available December 15th
It is the sequel to Rae of Hope, part of the Chronicles of Kerrigan.

BOOK DESCRIPTION:
Nothing is as it seems anymore.

Leery from the horrifying incident at the end of her first year at Guilder Boarding School, Rae Kerrigan is determined to learn more about her new tattoo. looks Her expectations are high, an easy senior year and a happy reunion with Devon— the boy she’s not supposed to date. All hopes of happiness fade into shattered dreams the moment she steps back on campus.

Lies and secrets are everywhere, and a betrayal cuts Rae deeply. Among her conflicts and enemies, it appears as if her father is reaching out from beyond the grave to ruin her life. With no one to trust, Rae doesn’t know where or who to turn to for help.

Has her destiny been written? Or will she becomes the one thing she hates the most-- her father’s prodigy.

BIO of WJ MAY
Wanita May grew up in the fruit belt of Ontario - St.Catharines. With a crazy-happy childhood, she has always had a vivid imagination and way too much energy.The youngest of six -- four older brothers, and a sister -- taught her at a young age to be competitive in all aspects of life.
At sixteen, she began competing in athletics (track and field) and before she turned seventeen, she was representing Canada in high jump. She continued to compete, breaking Canada's JR High Jump record (1.92m - 6' 3 1/2" for those metric-ly challenged). She attented University of Toronto, and Kansas State University - winning CIAU's and becoming All-American 6x - NCAA Indoors Runner Up + more.
But you're not interested in her athletic career - unless of course you're curious to know she stands 1.70m (5'7") and has jumped 20cm over her head on more than one occasion. She's represented Canada at the World Championships, World Jrs., won Francophone Games, and loved every minute of every competition. From the grueling workouts, the crazy weights she lifted on her back, the days she thought her lungs were going to spit out of her mouth for lack of oxygen, the traveling around the world and the opportunity to read - her favorite past time.
Life continued with her husband (a distance runner from Liverpool, UK, who she met at KSU) and then their first, then second and finally third child. Their house became full of more imagination and stories. Wanita and her husband run an online business, dealing in antiques and collectables - particularly jewelry and porcelain
After her father passed away in 2009, from a six-year battle with cancer (which she still believes he won the fight against), she began to write again. A passion she'd loved for years, but realized life was too short to keep putting it off.
Her first book, Rae of Hope - from the Chronicles of Kerrigan, published by Mitchell Morris Publishing debuted Oct 2011. Dark Nebula is available December 15th, 2012.
She is represented by Dawn Dowdle of Blue Ridge Literary Agency. Wanita is a writer of Young Adult, Fantasy Fiction and where ever else her little muses take her.
Her LINKS:
Facebook: http://www.facebook.com/pages/Author-WJ-May-FAN-PAGE/141170442608149
Twitter: @wanitajump
Website: www.wanitamay.yolasite.com
Email: wanitamay@aol.com
Book Trailers: http://www.youtube.com/user/wanitajump