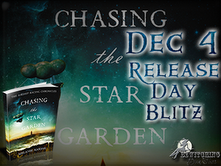 This release day blitz is presented by Bewitching Book Tours.
Click Here for more information.
Welcome to The Wormhole and my stop on the blitz.
It is my pleasure to feature:
Melanie Karsak and Chasing the Star Garden 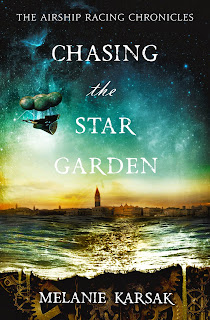 An opium-addicted airship racer.
An infamous poet living in self-imposed exile.
An ancient treasure about to fall into the wrong hands.

Melanie Karsak’s “Chasing the Star Garden” takes the reader on an exciting adventure from the gritty opium dens of gaslamp London to the gem-colored waters of the ancient world, introducing us Lily Stargazer, a loveable but reckless airship racer with a famous lover and a shattered past.

Lily Stargazer is having a bad day. She just lost the London leg of the 1823 Airship Grand Prix. To top it off, a harlequin fleeing from constables shoved a kaleidoscope down her pants, told her to fly to Venice, then threw himself from her airship tower.

What’s a girl to do? For Lily, the answer is easy: drink absinthe and smoke opium.

Lily’s lover, Lord Byron, encourages her to make the trip to Venice. Lily soon finds herself at the heart of an ancient mystery which has her running from her past and chasing true love and the stars along the way.

Excerpt:
A reporter from the London Times and several race officials stood waiting for me.

“Well done, Lily! Well done!” the British race official congratulated me with a pat on the back. “Second place! King George will be so proud. One of these days you’ll have it, by God.”

I was pretty sure that the last thing I needed was the attention of George IV, the extravagant, unpopular lush. But I bit my tongue and smiled politely.

“Lily, how did Cutter beat you? You led the entire race,” the reporter asked. She was a round woman wearing a very thick black lace collar that looked like it was choking her. Her heavy purple walking dress looked hot under the late afternoon summer sun, and the brim of her black satin cap barely shaded her nose. I noticed, however, that she had a small clockwork fan pin attached to her chest. The fan wagged cool air toward her face.

I pulled off my cap, mopped my forehead, and thought about the question. “Luck,” I replied.

“Lily, that was some move around Tinkers’ Tower. How did you learn to do that?” another reporter asked.

The Marshall looked like someone who lingered an hour too long at supper. The gold buttons on his satin, marigold colored vest would take an eye out if they popped. His overly tall top hat was adorned with a ring of flowers that matched his striking orange colored dress coat.

“Miss Stargazer, congratulations,” he said, shaking my hand. “The Spanish airship is coming in now. Will you please join Mr. Cutter at the winners’ podium?” he asked politely as he guided me forward by the hand.

From below there was a commotion. A man dressed in an unusual costume rushed up the stairs. The London constables, a full squadron of the Bow Street Runners, chased him. When he got to the loading platform, the man pushed through a crowd of well-dressed ladies and gentlemen, many of whom were gentry. It was then I could see he was dressed as a harlequin. He wore the traditional red and black checked outfit and a black mask. He scanned the towers until he caught sight of me. He jumped, landing on the tower railing, and ran toward me. A woman in the crowd screamed. Moments later the constables appeared on the platform. The race Marshalls pointed toward the harlequin who was making a beeline for me.

I let go of the Marshall’s hand and stepped back toward the ship.

Angus reached over the deck of the Stargazer and grabbed a very large wrench.

Was it an assassin? Christ, would someone murder me for winning second place? I turned and ran toward the Stargazer. A moment later, the harlequin flipped from the rail, grabbed one of the Stargazer’s ropes, and swinging over the others, landed on the platform directly in front of me. Any second now, I would be dead.

He panted and muttered “Lily?” from behind the mask.

“Stop that man! Stop him!” a constable yelled.

“Get out of my way!” Angus roared at the crowd that had thronged in between us.

The masked man grabbed me, tugged on the front of my trousers, and leaned into my ear. The long nose of the mask tickled the side of my face. “Go to Venice,” he whispered as he stuffed something down the front of my pants.

“We got you now,” a constable said, grabbing him, raising his club.

The man shook him off, took two steps backward, and with a jump, leapt off the tower.

Several people in the crowd screamed.

I rushed to the side of the tower to see the harlequin lying at its base. His body was twisted, and his arms and legs bent oddly, contorted into three distinct points. Blood began pooling around him.

“Miss Stargazer, are you all right?” a constable asked.

“A man just killed himself in front of me. No, I am not all right.”

I shook my head and looked down at the mangled body which lay in the shape of a three-sided triskelion. It was the same symbol that was painted on the balloon of the Stargazer.

Melanie Karsak grew up in rural northwestern Pennsylvania where there was an abysmal lack of entertainment, so she turned to reading and hiking. Apparently, rambling around the woods with a head full of fantasy worlds and characters will inspire you to become an author. Be warned. Melanie wrote her first novel, a gripping piece about a 1920s stage actress, when she was 12. A steampunk connoisseur, white elephant collector, and caffeine junkie, the author now resides in Florida with her husband and two children. Melanie is an Instructor of English at Eastern Florida State College.