Review: Hammer Down: Children of the Undying, Book 2 by Moira Rogers 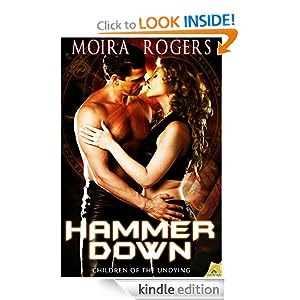 Hammer Down: Children of the Undying, Book 2 by Moira Rogers


When hell reigns on earth, love is a luxury they can't afford.
Children of the Undying, Book 2
While the tattered remains of humanity huddle underground, hiding in their virtual world, Devi prefers living topside, making dangerous hauls through the demon-infested wasteland earth has become. The wealth that comes from smuggling supplies to those shunned as summoner-born or demon-touched doesn’t hurt, either.
The man she meets to arrange one of those under-the-table hauls is complicated…and handsome as hell. Literally. A glimpse of the predator beneath his silver gaze and she’s tempted to break her cardinal rule: never mix business with pleasure.
Zel’s first look at the wild-haired hauler threatens to distract him from his mission—and reminds him just how long it’s been since he got laid. As the leader of an outcast settlement, he can’t afford to trust too easily. Devi’s got a reputation for running a tight, disciplined crew, but her very willingness to deal with him means she has something to hide.
Not to mention a hot, tempting package like her could be the cleverest trap his enemies have ever set.
Warning: Contains demon bars, virtual (and literal) fights to the death, forbidden love, renegade AIs, a badass truck-driving heroine who will do anything to protect her crew and the half-demon warrior who will move heaven and hell to make her his.

Another fantastic read by Moira Rogers!
Once again we are given truly fantastic characters and a situation that will forge unending partnerships or leave destruction in it's path.
Fast-paced, action-packed, well-written, fully-developed characters, and a diverse, carefully built setting all put together with a fantastic story.
The technology and world building in this one is different from anything I have read recently.  Cleverly planned and creatively designed - this is one you don't want to miss out on.
Posted by Beverly at 10:24 PM 0 comments

Blog Tour: The Kingdom on the Edge of Reality by Gahan Hammer

This blog tour is presented by Tribute Books.
You can get to the tour schedule by clicking HERE. It's the official tour website.
Welcome to The Wormhole and my day on the tour.
It is with great pleasure that I feature Grahan Hammer.

Gahan Hanmer enjoyed a colorful career in the theater as actor, director, designer and technician, and also wandered extensively searching for love, happiness and truth. He unintentionally became a grown-up raising two beloved daughters and now lives in the high chaparral desert of California.

Gahan has graciously offered to this interview:


Like 75% of the people who decide to write a book, I was raising a family on what seemed like an inadequate salary, and I wanted to make some extra money. The idea was to write a blockbuster and sell it to the movies, but as soon as I brought my characters to life, they ran off with the story and turned it into a very unusual and provocative novel. Whether the movies want it or not doesn’t seem important anymore. I’m very pleased and amazed by the way it turned out.

 How many jobs did you have before you became a writer?

Depending on how you would classify them, I’ve worked in between thirty and forty different occupations in my travels. While I was in the theater I had to support myself however I could because there is very little money to be made in theater. When I wasn’t acting or directing, I built scenery and that eventually turned me into a skillful and imaginative carpenter. While I was raising a family I made my living mostly through carpentry, but as far as jobs go, I’ve done everything you could think of. Long ago, during one very low-down period in New York City, I put food on the table playing the banjo in Central Park.

 How long does it take you to write a book?

It took me two and a half years to write The Kingdom on the Edge of Reality, working on it every single evening of the week. When it was first finished I sat on it for some time and then rewrote parts of it; the rewriting took about three months. Then there was an editing process that took a few months. Fine tuning continued until it was too late in the publishing process to do any more.

As I mentioned before, my characters wrote the book. When I first envisioned the plot there were five plot points I intended to hit – five bases to run around. I got to the first base of the plot all right but when I started for second base my characters simply refused to go that way. I’m sure that many writers experience this, and at this point as a writer you have to make a choice. You can literally force your characters to do and say what they are not naturally inclined to do or say, in which case you are simply writing lies. Or you can turn it over and let your characters dictate the book to you, in which case you have the opportunity to present the life of the human spirit in an artistic form, which is the overall goal.

 Do you have a routine that you use to get into the right frame of mind to write?

No. It was a pleasure to write this book, and I was glad to find the time to do it.

Some of the characters began by being modeled after people I have known. King Albert, for instance, was an amalgam of two different people I knew. But very soon after I initially created them, each character transcended his or her model – if there was one to begin with - and took on a true individual personality. I hesitate to analyze this process; it is mysterious. I am also a musician and after I’ve composed a piece I often wonder where it actually came from. There is a wonderful and surprising Source of creativity that you can tap into as soon as you can get your own desires and your own ego out of the way.

I can’t recall how I got the idea for The Kingdom on the Edge of Reality. I remember that I had to play around with the idea in the beginning before I found the way I wanted to go, but I don’t remember the specifics of that process.

 What books have most influenced your life?

I’ve been influenced by all sorts of books that try to pose or answer questions about the meaning of life. All the great classic novels do this in some form or fashion and modern classics as well such as the works of Lawrence Durrell and Henry Miller John Steinbeck and Howard Fast and Richard Brautigan. There are so many of them.

 What is the first book you remember reading by yourself?

Maybe it was the Tarzan books or maybe The Hardy Boys.

 What are you reading right now?

Some books by Richard Brautigan that I haven’t read before.

I have four stringed instruments that give me a lot of pleasure and serve to balance me. I’m also very assiduous about meditation and yoga practice. I am waiting impatiently to see what the world looks like when 2012 has come and gone; I’m not making any big new plans until then.

 What is your favorite comfort food?

 What do you think makes a good story?

When I was in the theater we spoke of presenting the life of the human spirit in an artistic form. That’s my goal as well when I’m writing, and that’s the kind of literature I enjoy.

 Who would you consider your favorite author and why?

I enjoy many authors for many reasons but I don’t have a favorite.

 What book, if any, do you read over and over again?

I often prefer to read the classics over and over rather than search for a decent new book. I suppose that’s lazy of me, but I’ve been rather disappointed by the current fare.

The Kingdom on the Edge of Reality Book Summary:

Welcome to Albert Keane's beautifully designed medieval kingdom nestled in a completely isolated river valley in the Canadian wilderness. Peaceful, happy, and prosperous, it takes nothing from the modern world, not so much as a single clock.

There is a castle, of course, and a monastery. There is even a pitch dark, rat-infested dungeon - because you simply have to have one if you are trying to rule a feudal kingdom!

Farmers work the land, artisans ply their trades, monks keep school and visit the sick, and nobody (well, almost nobody) misses the modern world at all.

So why has Jack Darcey - actor, wanderer, ex-competitive fencer - been tricked and seduced into paying a visit? And why hasn't anyone told him that the only way to leave is a perilous trek across hundreds of miles of trackless wilderness without a compass or a map?

Because a tide of fear and violence is rising from the twisted ambitions of one of King Albert's nobles, and Albert's fortune teller believes that Jack could turn the tide - if he lives long enough ...

The Kingdom on the Edge of Reality blog tour site
Posted by Beverly at 8:16 AM 1 comments