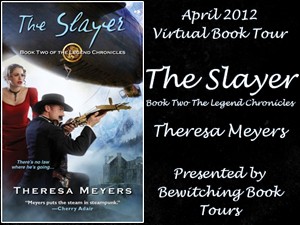 This virtual book tour is presented by Bewitching Book Tours.
Click HERE to see the entire tour schedule.
Welcome to The Wormhole and my day on the tour!
It is with great pleasure that I feature:
The Slayer: Book Two of the Legend Chronicles
by Theresa Meyers

THE SLAYER
Book Two of the Legend Chronicles
By Theresa Meyers
Zebra - Steampunk Romance
April 3, 2012
ISBN-10: 1420121251
ISBN-13: 978-1420121254
Brothers , Remington and Colt know the legends—they were trained from childhood to destroy demon predators, wielding the latest steam-powered gadgetry. It’s a devil of a job. But sometimes your fate chooses you...
CHASING TROUBLE
Winn Jackson isn’t interested in hunting nightmares across the Wild West—even if it’s the family business. Unlike his rakehell brothers, Winn believes in rules. As sheriff of , he only shoots actual law breakers. That’s what he’s doing when he rescues the Contessa Drossenburg, Alexandra Porter, a lady with all the elegance of the —grace, beauty and class. And then he sees her fangs.
Alexandra isn’t just some bloodsucking damsel in distress, though. She’s on a mission to save her people—and she’s dead certain that Winn’s family legacy is the only way. Luckily, aside from grace and class, she also has a stubborn streak a mile wide. So like it or not, Winn is going to come back with her to the mountains of Transylvania, and while he’s at it, change his opinions about vampires, demon-hunting, and who exactly deserves shooting. And if she has her way, he’s going to do his darnedest to save the world.
Amazon | Barnes & Noble | Books-A-Million | IndieBound
ebook: Kindle
About Theresa Meyers: 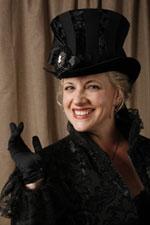 Raised by a bibliophile who made the dining room into a library, Theresa has always been a lover of books and stories. First a writer for newspapers, then for national magazines, she started her first novel in high school, eventually enrolling in a Writer's Digest course and putting the book under the bed until she joined Romance Writers of America in 1993.
In 2005 she was selected as one of eleven finalists for the American Title II contest, the American Idol of books. She is married to the first man she ever went on a real date with (to their high school prom), who she knew was hero material when he suffered through having to let her parents drive, and her brother sit between them in the backseat of the car. They currently live in a Victorian house on a mini farm in the with their two children, three cats, an old chestnut Arabian gelding, an energetic mini-Aussie shepherd puppy, several rabbits, a dozen chickens and an out-of-control herb garden.
You can find her online on Twitter, Facebook, at her Web site or blogging with the other Lolitas of STEAMED!
...and now to feed your need to read...
The Slayer Excerpt 2
Winn stared down the length of the table at the Contessa. Her hair was upswept in a complicated creation of curls and twists, leaving her elegant neck and her collar bone and the tops of her creamy shoulders tantalizingly bare just above a swath of red silk. A whiff of onions tweaked his nose and he looked down to see a steaming bowl of soup had materialized unannounced in front of him.
Winn found himself at a loss as to which of the spoons he should use. He’d never found a need for more than one and certainly not three. And there were just as many forks. Which should he use? A prickle of sweat began to itch his neck beneath the stiff starched rim of his boiled collar.
“Do you approve of our first course, Mr. Jackson?”
Winn glanced up and saw her lightly tap the spoon to the farthest right of his place setting. He picked it up and waited for her to take the first bite, then followed suit. Hunting had taught him a lot, but never anything about the ways of high society. Who needed to know which spoon was used for soup when it was a properly packed shotgun shell that was going to save your ass?
He shifted uncomfortably in his chair and took a bite of the onion soup. “It’s tasty.”
He could tell she tried to suppress her smile. She took another bite, then lightly patted her lips with her napkin. “You seem surprised.”
“Wasn’t anything I expected, that’s for sure.”
Her laugh was husky and genuine, wrapping around him and making him even more aware of how very feminine she was. Winn was out of his element. How did one make fancy dinner conversation? It wasn’t as if he could talk about work at the jail, or hunting. Ma had taught him enough to know those weren’t appropriate at the dinner table. The sudden memory of her pierced him, turning his stomach with regret. He put down his spoon and pushed the bowl away from him.
“Is something wrong with your soup?”
“Little rich for my blood,” he murmured.
One of the crystal goblets to his right began to fill with red liquid out of thin air. “That’s a mighty fancy trick.”
“Materializing objects is not a trick, Mr. Jackson, it is a power we work to achieve.”
He took the glass and sniffed the contents, making sure it was wine. The pleasantly tart flavor of grape swirled in his mouth, but he nearly choked when he saw what the Contessa had in her own glass. She held her own goblet to her lush mouth, but the red liquid was too bright, too viscous, to be wine.
“That a special vintage?” he asked, suspicion lacing his tone. She pulled the glass away from her lips and nodded.
“Anything I’d want to try?”
The Contessa arched a brow and shrugged. “I’m not in the habit of telling men such as yourself what you can and cannot do.”
Winn was momentarily distracted by the disappearance of his soup bowl and its replacement by a dinner plate filled with braised beef, tender asparagus and roasted red potatoes. It smelled better than anything he’d eaten in months. The back of his mouth ached and watered. His stomach growled. He didn’t bother trying to figure out which fork he was supposed to use to be proper, he just grabbed one and tucked in.
“It’s good to see a man with an appetite,” she said softly.
Winn glanced up at her as he chewed a bit of beef so tender he could cut it with his fork. He swallowed. “You say that like it hasn’t happened in awhile.”
She sipped at her wineglass thoughtfully. “Perhaps because it has been a long time. I’ve been a widow now nearly two hundred years.”
Winn choked, and launched into a coughing fit. “Two--two hundred years?”

Giveaway Details
Enter to win an Advanced Reader Copy of Theresa Meyers' second book in her Legend Chronicles steampunk romance series, THE SLAYER, along with an autographed cover flat and an antique china cup (cups will vary) accompanied by an assortment of teas and decadent Bliss chocolate.
a Rafflecopter giveaway