This virtual book tour is presented by Bewitching Book Tours.
You can see the entire tour schedule by clicking HERE.
Welcome to The Wormhole and my day on the tour.
It is my pleasure to feature:
Luna Lindsey and Emerald City Dreamer.
? When did you first realize you wanted to be a writer?
I’ve been writing since before I learned to read.  My father wrote sci-fi and my mother dabbled in poetry.  I’ve always had this dream, so took the opportunity to write full time when it arrived in 2010.

? How many jobs did you have before you became a writer?
I worked in the IT field for thirteen years before switching gears.  I’d held a number of jobs there, including Systems Engineer and Sales Engineer.

? How long does it take you to write a book?
The first draft process goes very quickly.  I’ve written two novel drafts in thirty days for NaNoWriMo, and Emerald City Dreamer took me six weeks.  I’m settling on six weeks as the optimal time for me.

The revision phases take significantly longer, usually 2-3 month stints, for two revisions per book.  That’s where the real craft begins, where I carve out a readable, coherent story from the marble block that is the rough draft.

? What would you say is your most interesting writing quirk?
I keep a lot of trinkets around my desk to play with while I’m thinking.  I smoke candy cigarettes, or puff on an ecig, or watch my robot butterfly, Lorenz, flap uselessly in his jar.  I simply must have candles lit, and I often consult with a ceramic skull, named Helga.

? Where do you get your ideas or inspiration for your characters?
I let them come to me.  Sometimes it’s just a name, or an image, or I’ll find a rare faerie race in folklore and build something from that.  Most of my characters end up being pieces of me and people I know.

? How do you decide what you want to write about?
I get ideas constantly, and keep a note file full of story ideas, characters, and snippets of prose.  The ones that I choose for development involve a particular alignment of the planets I can’t fully explain.  I think some people call this “random chance”.  For short stories, I often write to a specific market, like upcoming themed anthologies.

? What books have most influenced your life?
Books are constantly influencing me, including non-fiction.  As a child I adored A Wrinkle in Time by Madeline L’Engle and lots of books by Isaac Asimov, who inspired me to keep writing.  I was heavily influenced by the writings of Ayn Rand, though I’ve moved on a bit since then.  Richard Bach, who wrote Jonathan Livingston Seagull has a lot to say.  The Illuminatus Trilogy and Les Miserables, too.  For non-fiction, I’d pick books like Turbulent Mirror, Impro, Codependent No More, The Age of Reason, and Anam Cara: A Book of Celtic Wisdom.

? What are you reading right now?
I am currently in the middle of six books, including Story: Style, Structure, Substance, and the Principles of Screenwriting; Lolita; and a collection of short stories called Monsters & Mormons.  I tend to keep my GoodReads “currently-reading” list updated; feel free to check it out.

? What do you like to do when you are not writing?
Lots of things, but most of my fun-time is spent playing video games.  These days, I’m playing Diablo III with my fiancé.  I also like watching movies, going to cons, and hanging out with loved ones.

? What is your favorite comfort food?
Sushi!

? What do you think makes a good story?
The best stories are those which capture thematic truths and convey them to readers in an immersive way.  Characters will make difficult choices based on who they are.  Other characters will make different choices in opposition.  Those choices will lead to results, which will further complicate things, all of it leading to an inevitable ending that both surprises and satisfies… or one that leaves the reader looking into her own reflection for answers.

? Who would you consider your favorite author and why?
This one is always so difficult to answer because the world is filled with so many wonderful authors.  Today, I’m going to say David Brin.  Aside from his many good books, he has a fascinating blog.  He is a bit of a futurist, and always has something thought-provoking to say. 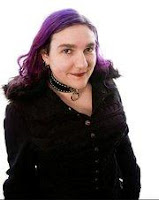 Luna is an indie author located in . Her first story (about a hippopotamus) crawled out of her head at the early age of 4. Her mom had to write it down for her. After running out of things to say about hippopotami, she switched genres to sci-fi, fantasy, and horror. During a ten-year break from fiction, she primarily wrote non-fiction and became an accidental expert on mind control, computers, and faeries.  After returning to fiction in 2010, she now publishes ebooks and seeks publication in short story markets.  She has written over thirty short stories and three novels.

Dreamer
Dreams by Streetlight Book One
By Luna Lindsey

Jina and Sandy survived the unthinkable.  Now they've set up a secret Order in to fight the impossible - fairytale creatures born of human nightmares and nourished on dreams.  Their tools: iron, lore, science, glamour, and support groups.  As beginners, without access to the ancient societies of faerie hunters, they must rediscover how to protect themselves.  And in order to fight the fiends of the world, must take control her inner ghosts.

As a dreamer in a rock band, Jina unknowingly feeds the fae and attracts unseen enemies at every turn.  Now, they're finally on the tail of at least one dark monster bent on evil.  She is a dreamer, so she must follow her heart - but which way does it lead?

Jett is an elf who only wants to protect her hodge-podge clan of faeries from the encroaching world of science and religion - which have systematically slaughtered her kind and the beliefs that gave birth to her people.  True dreamers are rare beings, and when she finds them, she does everything she can to protect them and claim them as her own.

Ezra is a teenager who never feels comfortable in his own skin.  Most people like him well enough, but when he looks in the mirror, he sees a demon.  He has been taken in by the Garbage Eaters, who expect obedience and purity.  Before long, he suffers a crisis of faith that may lead him into real danger.

Delve into this deeply developed, internally consistent world of the fae, and meet beings who are simultaneously alien, elegant, and terrifying, fueled by dreams and the creative energy of artists.  Glimpse the secret world of Tir Nan Og through the eyes of fully fledged four-dimensional characters living in a that is just a bit weirder than you think.

This is a story with psychological depth, a page-turner with unexpected twists and turns.

When prey hunts, who will lead the chase, and who will run?

**So far I am loving the story.  The characters are interesting and the storyline is clever.  I will post a final review later today.