Welcome to The Wormhole.
Today it is my pleasure to feature an interview with Anna White, author of The Light and Fallen. 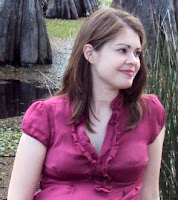 Anna is an author and counselor. She lives in Louisiana with her husband and two daughters, and can usually be found reading or writing something with a cup of tea nearby. She is currently at work on Divide the Darkness, the next book in the Chronicles of the Nephilim series. Proceeds from The Light and Fallen support The Water Project, a nonprofit organization.
Anna White:
When did you first realize you wanted to be a writer?
When I was in elementary school I wanted to be a writer, but I also wanted to be a missionary and an astronaut. I wrote poems about nature and one rambling story about talking cats. As an adult writing kept creeping onto my to-do list year after year, but I never got around to it. After I got the idea for The Light and Fallen I couldn’t stop thinking about the story, and I realized writing it was something I really wanted to do.
How many jobs did you have before you became a writer?
Eight. My worst job was working in the shoe department at K-Mart. I love kids, and have worked in various social service jobs with children since college. I don’t see myself leaving my day job any time soon.

How long does it take you to write a book?
I planned out the entire Chronicles of the Nephilim series before I began the first book, and that took me about 18 months. I wrote the first draft in six weeks, writing full time through the summer. The editing process took another ten months. I’m working on the second book now, and I’m hoping that the process will go more quickly.

What would you say is your most interesting writing quirk?
I wish I could say I have a daily writing practice, but I don’t. I write in obsessive spurts, then go days (or weeks) without working at all. When I’m actively writing, I take my netbook with me and work anytime I have to wait longer than ten minutes. I wrote parts of The Light and Fallen in the doctor’s office, in the car, at church. I get a lot of weird looks, but I’m a working mom so I have to seize every moment I can.

Where do you get your ideas or inspiration for your characters?
I draw traits from characters that I’ve found especially memorable in other books. I also think a lot about the plot of the story, and what each character’s perspective would be on the events. I have a MA in Psychology, so I try to apply some of those principles as I think about what motivates each characters and why they each make the choices that they do.

How do you decide what you want to write about?
I write about whatever takes hold of me and won’t let go. I do have a list of ideas for the future, some outlined more than others, but I only let myself work on one project at a time. As long as I keep dreaming about Jack and Lucian, I’ll keep working on the Chronicles of the Nephilim.

What books have most influenced your life?
This is so hard to answer, because I’ve always read whatever I could get my hands on, and I believe that each of those books has taught me something. A few that come to mind are:
In elementary school: The Wizard of Oz series. We had a whole set up early editions and I read and reread those. I loved the magic of that world. One of the books had a word, that if said correctly, would transport you to Oz, and I remember laying on the couch trying to say it 100 different ways.
As a teenager: Gone with the Wind. This books has its flaws, but there’s a lot to love there too. It gives such insight into the southern way of life, and Scarlett and Rhett are the definition of dark, complicated characters.
Inspired me to start writing: Twilight. I didn’t like this series at first, but it really grew on me. My favorite thing, though, is that Meyer wrote this while her kids were at swim practice or at night while they were sleeping. She make me believe that I could be a mom and an author.
Remind me what a gift life is: Poetry by Mary Oliver. She writes so wonderfully. I have one of her poems taped to my desk at work, and it always reminds me to focus on what is good and true.


What are you reading right now?
Right this minute I’m reading Catching Fire and Looking for Alaska.


What do you like to do when you are not writing?
Read, of course. I also like doing digital scrapbooking and going to the park with my family.


What is your favorite comfort food?
I love creamy onion soup on a cold day. And my husband doesn’t like it, so when I make a pot it’s all for me!


What do you think makes a good story?
I like to get to the end of the story and see a web of connections stretching from beginning to end. I also like for all of the characters be well developed and believable. I personally think no one is all good or all bad, and no one makes the right choice all the time, even if they can figure out what the right choice is. I like to see characters that reflect that.


Who would you consider your favorite author and why?
J.K. Rowling. I really think the Harry Potter series is one of the greatest YA series ever written. I’ve read each of the books at least ten times, and the world building is so complex and the characters are so layered that each time I still discover something new.

Amazon Product Description:
Lucian isn't sure what to expect when he steps over the banister separating Heaven from Earth. He opens his eyes in a new body, one with no wings, no knowledge of the future, and no special powers. All he remembers is his mission: to find a mysterious key. When he meets a human girl that he can't ignore he is forced, for the first time in eternity, to choose between duty and the pull of his heart. The future hangs on his decision, but he's fallen into a world where nothing is just what it seems. *100% of the proceeds of this novel will be donated to The Water Project.http://www.thewaterproject.org