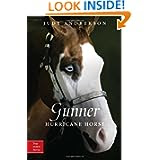 Amazon Product Description:
Each book in the True Horse Stories focuses on a contemporary horse from a different part of the world, and each animal is, in his or her own way, a hero.

PBJ Decks Smokin Gun (Gunner) is an American Paint Horse, one of the many of Heather Lott Goodwin's herd, and a valuable show animal that won the World Championship Paint Horse title. When Hurricane Katrina passed over the Goodwin property, it took with it the fences, the cattle, and several horses. Heather and her family lived in their horse trailer for six weeks and considered themselves lucky to have safe, comfortable shelter. After the storm, they searched for the animals and recovered many of them. But three months passed before they located Gunner, a hundred miles away. They were told he was in terrible shape and should be put down. Nevertheless, Heather drove on washed-out roads to bring him home, starving, dehydrated, and blind in one eye. With the help of a vet and her mother, she nursed him back to health. Amazingly, nine months later, he was well enough to compete again in the World Championship Paint Horse Show. Gunner's story is a testament to love and to determination.


My thoughts:
I wasn't ready for this book - I thought that this would be a light, fast read.  This idea was reinforced by the illustrations and the short length of the book.  I enjoyed the story very much.  I found the descriptions of the world of training and showing horses to be accurate and interesting without getting too involved.  I found myself laughing and crying.  I had no idea that the story would take ahold of my heart the way it did.  I was not prepared for the end of the story and the dedication.  It's a great read - be ready with the tissue.
Posted by Beverly at 8:00 AM 1 comments