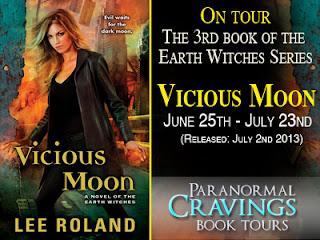 Welcome to The Wormhole and my stop on the tour.
It is my pleasure to feature Lee Roland and Vicious Moon.

About Lee Roland
Lee Roland began her writing career in middle school when she wrote a short story for her brother. He turned the story in to his teacher as his own work.  To his amazement and terror, the teacher was so impressed that she read it aloud to the class—and asked him to write another one.
Lee notes that, other than motherhood, she’s never had an exciting job.  She might have dreamed of being  a lawyer, nurse or police officer, but finding the right person to share her life with changed her plans.  Her only credentials for writing are a terrific imagination, life experience and the love of words in a good story.  She reads voraciously, but particularly loves Urban Fantasy and Paranormal Romance.
Lee lives in Florida and is a full-time writer.  She is a member of RWA National and the Florida based First Coast Romance Writers. Before being published, Lee won many RWA Chapter contests and garnered a Golden Heart nomination in 2008 with her post apocalyptic novel, LILITH’S CHILD.
Lee is the author of the Earth Witches series published by NAL, beginning with VIPER MOON in 2011.

About the series:
Dynamic Urban Fantasy by Lee Roland
The Earth Witches, the keepers of the world’s magic, find chaos and desire in the hidden ruins of the Barrows.  Servants of the enigmatic Earth Mother, they battle men, monsters and personal conflicts to protect the world. With magic, modern weapons and strong companions, they persevere to save mankind from evil.

The books from this series:

Viper Moon  (Earth Witches #1)
(352 Pages)
Cassandra Archer is the huntress. She has faithfully served the earth Mother for years, rescuing kidnapped children from monsters— both human and supernatural—dwelling in the
ruins of the Barrows District. But when two children are kidnapped under similar circumstances, all clues point to a cataclysmic event on the next dark moon. Aided by police
Detective Flynn and Michael, mysterious and dangerous resident of the Barrows, Cass must race against the clock and prevent a sacrifice that could destroy the entire town…

Vengeance Moon  (Earth Witches #2)
(352 Pages)
Madeline Corso can’t rest until she hunts down the three men who killed her father and witch mother. Two of them are now dead by her hand.  Unfortunately, her second kill had
witnesses.  Sent to prison, she is rescued Sisters of Justice—a mysterious order of female warriors with ties to her mother. Her fighting skills are honed by the Sisters, and they have tracked the last murderer to Duivel, Missouri.  He is hiding in the dark underworld of the Barrows. Once in the Barrows, she discovers that things aren’t what they seem.  The danger goes far beyond her need for revenge. Can she rely on Michael, a handsome and possibly deadly stranger, to help her navigate a world of men and beasts? Or will she lose her heart before the mission is complete?

Vicious Moon  (Earth Witches #3)
(320 Pages)
Expected publication: July 2nd 2013 by Signet
Ex-soldier and Earth Witch Nyx Ianira is working as a PI in San Francisco when she sees the last thing she ever wanted to see:  the Sisters of Justice—the mysterious Earth Witch police force.  Three Sisters, a Triad, is usually a squad of executioners.  This time, thought, the Sisters mission is to capture and escort an unwilling Nyx back to Twitch Crossing, Georgia.  Nyx ran away from Twitch Crossing ten years ago to escape the stiff rules and duties of being a true Witch. She wanted a life of her own. Now she’s been dragged back to her swampy hometown because another life is in danger—her little sister is missing, and Nyx is the only one who can go to Duivel, Missouri and track her down.  But the key to finding her may lie with the dark and tempting Etienne—a sinister criminal with a fearsome reputation, a ruthless attitude, and a total immunity to magic…

My thoughts:
Fascinating characters.  Wonderfully thought out and well executed story.  This is a fast-paced, thrilling tale that had me turning the pages faster and faster.   I love a book that grabs you from the very first page and makes you want to put everything else on hold until you finish it - this is one of those books.
Posted by Beverly at 5:00 AM 0 comments