This tour is presented by Enchanted Book Tours.
Welcome to The Wormhole and my day on the tour.
It is with great pleasure that I feature:
KH LeMoyne's Betrayal's Shadow!

A former technology specialist, KH LeMoyne now writes romance fulltime with series in urban fantasy, high fantasy, and scifi/futuristic. She lives in Maryland with her wonderful husband and corgi. Much to her dismay, she rarely encounters supernatural beings other than on paper. Visit her website: http://www.khlemoyne.com/ or blog: http://fantasypoweredbylove.com/

Betrayal's Shadow by KH LeMoyne
Betrayal’s Shadow (The Guardians of Eden, Book #1) is an adult urban fantasy romance novel.
Book Blurb:
What would you do to save your people from extinction?
What if your race held the key to mankind’s future?
One Guardian will risk hell to change the future.

Descended from the race of Guardians, Turen’s people have survived the last two hundred years, quarantined and isolated. Living in secrecy with no mates and no offspring, they fail to deliver on their ability to replenish and heal human souls through the birth of their Guardian children. Risking his life, Turen chooses capture at the hands of a comrade-turned-enemy to seek answers to change the future.

Mia Bowman has no knowledge of the secret Guardian race. Yet, her uncontrollable, nocturnal summons to Turen’s prison cell and her strong sense of justice leave her with little choice but to help him. She can heed his warning and stay clear of his people’s problems or she can ferret out the lies and unravel an ancient tale of murder and deceit. It will take an ultimate sacrifice to stop the unexpected evil and reverse a fatal ending to the Guardian line.

THE GUARDIANS OF EDEN:
A race of beings created in a Sanctum at the far edge of Eden. Co-existing with mankind, they safeguarded human souls and the promise of eternity—until a virus killed all over the age of eighteen. The surviving children fled to the Sanctum for protection, children raising children without the full legacy of their history and knowledge. Two hundred years of solitude have produced a race of semi-immortals fortified with powers and intellect but lacking the mates who will make them whole and allow them to fulfill their covenant with mankind.

You can see my review of Betrayal's Shadow by clicking HERE. 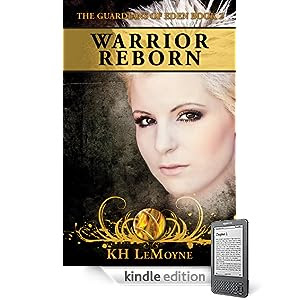 Warrior Reborn is Book Two!  You HAVE to read this one too!
You can see my review by clicking HERE.
Amazon Product Description:
They are the Guardians of Eden—each created with a unique supernatural talent.

Having successfully hidden her abilities from humans for two hundred years, Briet quietly applies the gifts of cellular-level vision to help patients in need. Until she meets her human soul-mate, Jason Ballard.

Jason holds the reigns to the protocol Briet’s patients’ need for recovery. But can she trust a man all too human and grounded in his world to understand hers, much less believe her? When a deadly threat targets her patients, he is the only one she trusts to help stop an evil only the two of them can fight.

Jason has a perfect success rate for delivering of new drugs from test-to-market. Used to influencing people, rules and guidelines delineate every facet of his professional and personal life. The last thing he expects is to be tempted to waiver by the new spitfire doctor on his latest test team. Especially as she starts stirring up issues. Dangerous issues. Issues flagging jeopardy for the lives of the children in the test. Issues the drug manufacturer, his employer, would prefer be ignored. An unacceptable outcome, forcing Jason to walk a dangerous line between job and conscience as he plunges with Briet to ferret out the twisted scheme in time to save her patients.

Escalating to a final life-altering decision, Jason will risk every careful plan he’s ever made for the woman he learns to value more than life. For Jason and Briet, their final gamble will change destiny more than either could ever predict.