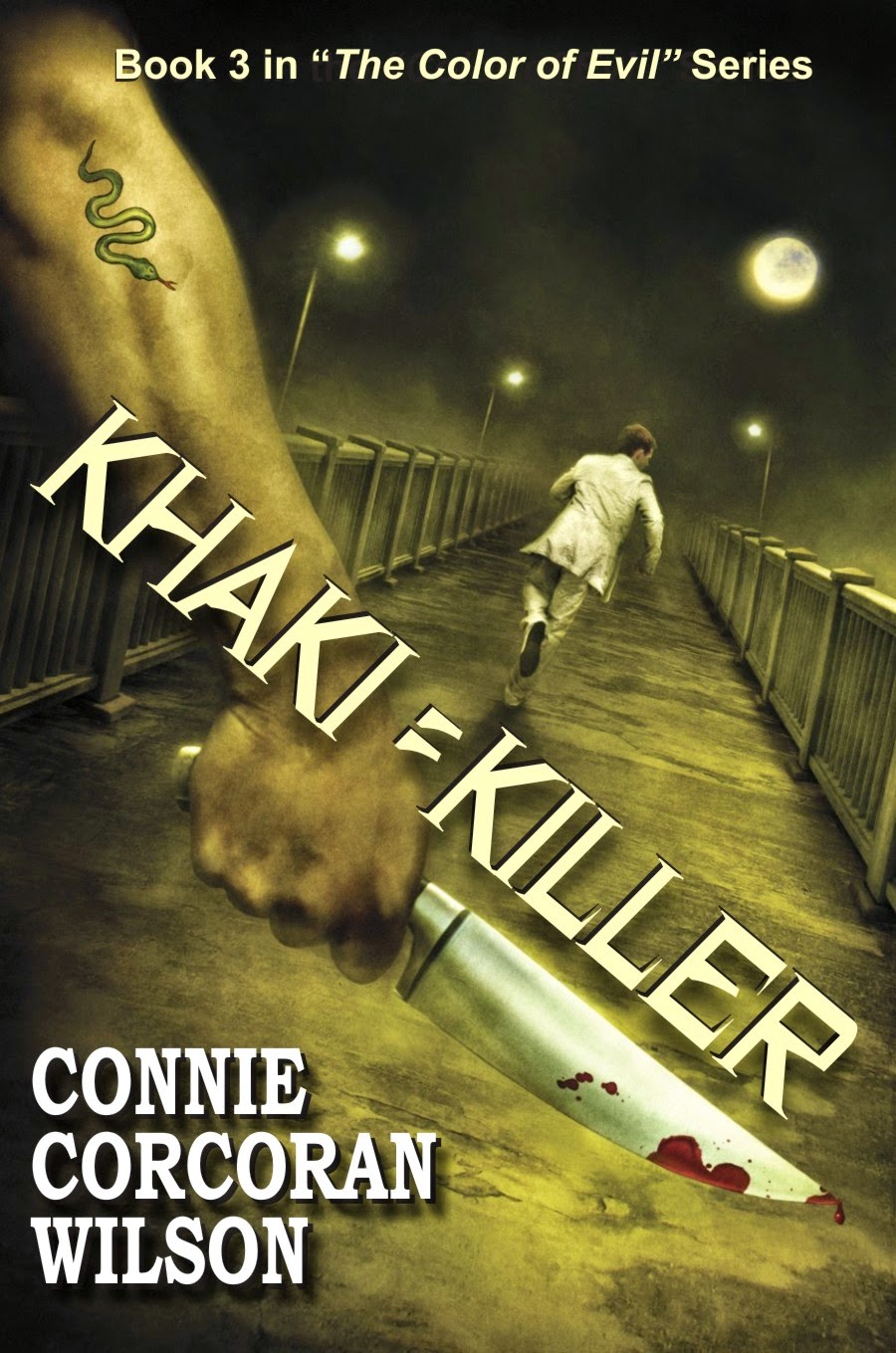 Khaki = Killer , the third book in the Color of Evil Series, picks up where Red Is for Rage left off, answering the question, “What happened to Melody (Harris) Carpenter?”
Readers of Red Is for Rage, [Book #2 in The Color of Evil series], will remember that Melody was involved in a rescheduled UNI (University of Northern Iowa) football game, cheering for the Sky High Eagles. Rushed to the hospital with injuries suffered in a fall from atop the human pyramid [formed by fellow cheerleaders Heather, Kelly, Janice, Angie, and Jenny, Melody is hospitalized and fighting for her life as Khaki = Killer opens.
The budding romance between Janice and Stevie continues to grow more serious, but Janice’s parents oppose her relationship with the son of the man who shot and killed so many townsfolk at the Homecoming game. There are more revelations about Earl Scranton’s motives, and other romance s develop (Tad and Jenny; Charlie and Andrea).
When Heather Crompton and Kelly Carter mysteriously disappear, the tension in town ratchets to a fever pitch. The entire town is involved in the search. Retired police officer Charlie Chandler reorganizes the rag-tag team that helped find Stevie Scranton and bring him back to Cedar Falls, Iowa.
In the background lurks Michael Clay (aka, Pogo), still searching for Tad McGreevy, still hoping to permanently silence “the boy who can see the future.”
Tensions run high and the stakes run even higher in KHAKI = KILLER, Book #3 in THE COLOR OF EVIL series.

My thoughts:
Another thriller from Connie Corcoran Wilson.  It's so hard to label her books as fantastic or great reads, as she tells tales that chill you to your soul - her skill at telling that story is the part that is fantastic and great.  She has once again brought us into the world where Stevie and Tad live.

Khaki = Killer takes over right where Red is for Rage left off, giving us what we were looking for at the end of that second book.  We are thrown back into their lives and are given another glimpse into the people they are becoming.  I was thrilled with Stevie's growth and how we get to see him as so much more than that abused and victimized boy.

Connie's books bring out a strong emotional reaction.  The topics that she chooses are controversial and disturbing.  It takes a skilled writer to approach the ugliness of the world with enough sensitivity and understanding to produce a story like this one.

Again, I found myself shocked and horrified at the characters who portray humans who have lost their humanity thus becoming monsters, and by the reasons for it.  And again I am waiting for the next book for "that moment of closure."

Check out my thoughts on the first and second books:
The Color of Evil
Red is for Rage