This blog tour is presented by Bewitching Book Tours.
Click HERE for more tour information.
Welcome to The Wormhole and my stop on the tour.
It is my pleasure to welcome Angela McCallister and feature her book Bad Cop. 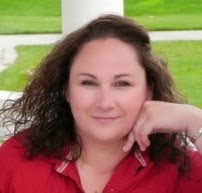 Angela McCallister has always wanted to grow up to be someone who would never grow up, and lucky her, that’s exactly what she’s done. Nothing says adventurous more than being a career US Navy Sailor with an imagination wild enough to create stories and characters with a paranormal bite. A mother of five, she’s gained plenty of story ideas from her family as well as her military experience.

Angela is very laid-back and happy to try just about anything once, from skydiving, sailing, slacklining, Aikido, and even hang-gliding--as long as she doesn't have to subject anyone to her "singing" or make an appearance in a bikini. Like all authors, she's crazy for books, especially Romance, and will talk about them for days. She's currently stationed at Naval Base Ventura County Point Mugu in California where she can be spoiled with some of the best weather in the country. With such platforms as an aircraft carrier, an amphibious ship, and an Aegis destroyer, and duty stations in Illinois, Washington, Hawaii, and California, her experiences vary widely. She's visited Thailand (a favorite), Bahrain, Dubai, Jebel Ali, Hong Kong, Guam, Canada, Mexico, and Singapore. She's a member of RWA San Diego, From the Heart Romance Writers, and Rose City Romance Writers and especially loves to hear from and meet readers and fellow authors.

A cop who tosses the rulebooks to get his way…

Vampire Ian McCready doesn’t care for Alice Capshaw’s opinions about his version of justice. Her humanity makes her off-limits, but that does nothing to lessen his overwhelming desire for her. To Alice, Ian is just another bad cop as detestable as the one who destroyed her family. She’s attracted to him, yes, but he threatened his way into her agency’s murder case and has too many secrets.

When a new case resurrects ghosts Ian believed long dead and buried, his law-bending ways might result in his execution. The second Alice becomes a target, his cold heart flares into blinding existence. But following the law for her sake may end with devastating results.

My thoughts:
I was thrilled to have another Angela McCallister book to read.  I truly enjoyed the first book, Bad Mouth (see below for link), and was pleased that I enjoyed this one just as much or more.

Angela has built a host of fantastic characters.  These are the kind of characters that draw you into the story at the start, hold on tight through the middle and by the end have buried you so deep in their world that you have all but forgotten that they aren't real people that you know and care about.

The world she has created for these characters is well thought out, cleverly constructed and believable.  The story is fast paced, intriguing and entertaining.  Couldn't put it down. 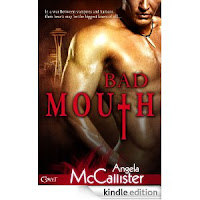 Click HERE for my thoughts and a blurb about Bad Mouth!