Inspired Kathy at I Am A Reader Not A Writer, with some help from The Bookish Snob, is hosting another great Giveaway Hop!
Click here to go to the Linky!
I am #67 on the Linky list - Thanks for stopping by!  Enjoy the hop!

So ~~~~ the information you really want: What am I giving away?
I was lucky and was given two copies of The Skin Map by Stephen R. Lawhead- from Stephen R. Lawhead!  So, I am keeping one and giving one to the lucky follower whose entry number gets drawn by random.org!
The giveaway runs from April 1, 2011 until midnight on April 2, 2011.  The winner will be chosen by random.org on April 3, 2011, the winner will be emailed and the book sent to the address listed on the form. 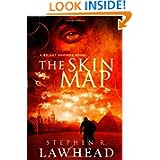 The Skin Map by Stephen R. Lawhead!
Amazon Product Description:
It is the ultimate quest for the ultimate treasure. Chasing a map tattooed on human skin. Across an omniverse of intereing realities. To unravel the future of the future.
Kit Livingston's great-grandfather appears to him in a deserted alley during a tumultuous storm. He reveals an unbelievable story: that the ley lines throughout Britain are not merely the stuff of legend or the weekend hobby of deluded cranks, but pathways to other worlds. To those who know how to use them, they grant the ability to travel the multi-layered universe of which we ordinarily inhabit only a tiny part.
One explorer knew more than most. Braving every danger, he toured both time and space on voyages of heroic discovery. Ever on his guard, and fearful of becoming lost in the cosmos, he developed an intricate code--a roadmap of symbols--that he tattooed onto his own body. This Skin Map has since been lost in time. Now the race is on to recover all the pieces and discover its secrets.
But the Skin Map itself is not the ultimate goal. It is merely the beginning of a vast and marvelous quest for a prize beyond imagining.
The Bright Empires series--from acclaimed author Stephen Lawhead--is a unique blending of epic treasure hunt, ancient history, alternate realities, cutting-edge physics, philosophy, and mystery. The result is a page-turning, fantastical adventure like no other.

To enter this giveaway hop - please make sure you are a follower and fill out this form!
Posted by Beverly at 10:59 PM 2 comments

For those that don't know, NetGalley is a way for publishers to share their digital galleys securely to readers. Bloggers, librarians, booksellers.
Emily at Red House Books has declared April to be Net Galley Month!  I think this is a fantastic idea!  I am a Net Galley member and I too have amassed quite a list of galleys that I have been trying to get read and this challenge is the perfect opportunity to get me going on them!  So.... the idea is to read as many Net Galley books as possible in April 2011!  If you are interested in participating - then go here and sign up to be a part of this!
The books I am hoping to finish are:
Hunting Human by Amanda E. Alvarez - - 4/1/11 - Review
Rage by Jackie Morse Kessler - 4/2/11 - Review
Sleeping Beauty: Vampire Slayer by Maureen McGowan - 4/3/11 - Review
The Guardians of the Hidden Scepter by Frank L. Cole - 4/16/11 - Review
In the Arms of Stone Angels by Jordan Dane - 4/20/11 - Review
Forever Vampire by Michele Hauf - 4/22/22 - Review
Invisible Inkling by Emily Jenkins - 4/24/11 - Review
The Vampire Dimitri by Colleen Gleason - 4/25/11 - Review


Steam and Sorcery by Cindy Spencer Pape
Badlands by Seleste DeLaney
The Mysterious Lady Law by Robert Appleton
I will post the reviews and link them here as I finish the books!
Posted by Beverly at 12:31 PM 2 comments