Blog Tour: From Russia with Blood by Michael Lee 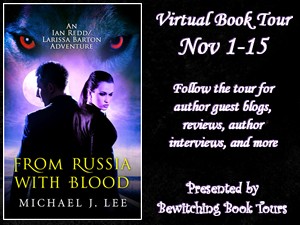 This virtual book tour is presented by Bewitching Book Tours.
You can click HERE to get to the entire tour schedule.
Welcome to The Wormhole and my day on the tour!
I am thrilled to present my feature:
Michael J. Lee and From Russia With Blood.
We are so lucky...
We get both an book excerpt and a guest post!!!
Please welcome...Michael Lee!


Micheal J Lee was born in the and has spent time out on the East Coast and in LA.  He learned the craft of screenwriting the hard way, as a barely paid reader. That’s how he got a good feel for writing form and the craft of storytelling. His approach to a story is a lot like Bruce Lee's approach to fighting, absorb what is useful.
Lee published his first paranormal romance, My Frankenstein, recently. It's been an adventure – and now he’s on to book 2, From with Blood.
http://myfrankensteinebook.blogspot.com/
http://www.goodreads.com/author/show/4849011.Michael_Lee
Thanks for stopping by The Wormhole!
Happy Reading!!!
Posted by Beverly at 5:00 AM 1 comments