Susan Kaye Quinn grew up in California, where she wrote snippets of stories and passed them to her friends during class. Her teachers pretended not to notice and only confiscated her stories a couple times.

Susan left writing behind to pursue a bunch of engineering degrees, but she was drawn back to writing by an irresistible urge to share her stories with her niece, her kids, and all the wonderful friends she’s met along the way.

She doesn’t have to sneak her notes anymore, which is too bad.

Susan writes from the Chicago suburbs with her three boys, two cats, and one husband. Which, it turns out, is exactly as a much as she can handle.

Third Daughter by Susan Kaye Quinn
(The Dharian Affairs Trilogy #1)
Publication date: December 13th 2013
Genres: Adult, Fantasy, Romance, Steampunk
Synopsis:
The Third Daughter of the Queen wants her birthday to arrive so she’ll be free to marry for love, but rumors of a new flying weapon may force her to accept a barbarian prince’s proposal for a peace-brokering marriage. Desperate to marry the charming courtesan she loves, Aniri agrees to the prince’s proposal as a subterfuge in order to spy on him, find the weapon, and hopefully avoid both war and an arranged marriage to a man she does not love.

Third Daughter is the first book in The Dharian Affairs Trilogy (Third Daughter, Second Daughter, First Daughter). This steampunk-goes-to-Bollywood (Bollypunk!) romance takes place in an east-indian-flavored alternate world filled with skyships, saber duels, and lots of royal intrigue. And, of course, kissing.
Excerpt:
The cloudless night whispered sweet promises to Aniri.
Below her stone rooftop, the shadows of the forested grounds danced in the summer’s breeze, their small rustlings calling to her like a lover. The sound was the perfect cover for escape into the darkness and the warm arms she hoped to find there. No one should notice her absence. Of all the guards, handmaidens, and many silent keepers of the royal household, none would venture up to her private observatory this late in the eve. But she still had to be careful. Even this close to her birthday, the Queen would not be forgiving if she was caught.
Aniri scanned the palace grounds to make sure it was clear of any witnesses. The manicured lawns were empty: the only sign of life came from the distant embassy windows where gas lamps flickered and soft music trilled from late-reveling partygoers. Aniri pressed the leather eyecup of her aetherscope to her face, slowly turning the brass knobs to bring the party into focus. The instrument was meant for watching the rise of the twin full moons, but it worked well enough for spying on the Samirian ambassador and her assemblage of guests.
Their shiny new automaton was thick-legged and awkward, but the Samirian tinker’s design was still clever: the steam-driven mechanical wonder actually danced, albeit just one clumsy pirouette after another. When it came to a graceless stop, the guests snapped their fingers in appreciation. The faint sound of their applause drifted over the lawn, but the party continued on. With the grounds still empty, Aniri swung her aetherscope to the forest. The broken edges of the river snaked through the darkened trees, slipped under a stone bridge, and then flowed past the red sandstone walls of the Queen’s estate. A black shape darted out from under the bridge, then disappeared into the shadows between the trees.
Time to go.
Goodreads: https://www.goodreads.com/book/show/19167136-third-daughter?ac=1
Purchase:
Amazon: http://bit.ly/SKQonAmazon
Barnes&noble: http://bit.ly/SusanonBnN
iTunes: http://bit.ly/SKQoniBookstore
kobo: http://bit.ly/SusanonKobo
----
Giveaway: 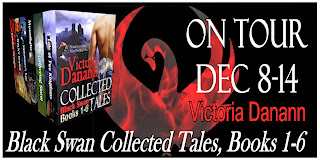 Welcome to The Wormhole and my stop on the tour.
It is my pleasure to once again feature:
Victoria Danann's Black Swan Collection!
﻿ 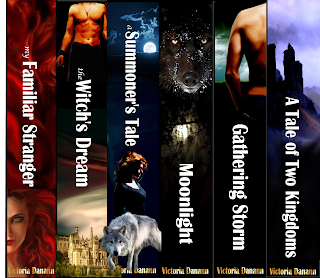 The Order of the Black Swan is a serial saga including My Familiar Stranger, The Witch’s Dream, A Summoner’s Tale, Moonlight, Gathering Storm, and A Tale of Two Kingdoms.
Once upon a time a girl lost everything familiar. She escaped death by being forced into an experiment that left her in another world where modern day knights, elves, vampires, werewolves, witches, demons and fae became her allies, friends and family. She discovered a place where adventure intersects fairytales, where honor is more than an ideal, and she learned that love can find you in the strangest places, when you're least expecting it, even when you're far, far from home. This is the story of Elora Laiken's strange and wonderful journey. It is also the story of those whose lives she touches along the way.
If you love romance, paranormal, science fiction, fantasy, urban fantasy, contemporary, this series is right for you. 17+
Click on book title to go to information and my thoughts post for each book.
My Familiar Stranger
The Witch's Dream
The Summoner's Tale
Moonlight
Gathering Storm
Click HERE to go to an interview.
﻿

Tourwide Giveaway:
We must insist on one purchase per entry, but unlimited entries are allowed so please consider giving everyone you know the entire Black Swan saga for less than a dollar!
a Rafflecopter giveaway
Posted by Beverly at 5:00 AM 0 comments