This blog tour is presented by Tribute Books.
Welcome to The Wormhole and my day on the tour.
It is my pleasure to feature Amy Lignor and book two in the Angel Chronicles series, Gilded Wings.

Amy Lignor began her career at Grey House Publishing in northwest Connecticut where she was the Editor-in-Chief of numerous educational and business directories.
Now she is a published author of several works of fiction. The Billy the Kid historical The Heart of a Legend; the thriller, Mind Made; and the adventure novel, Tallent & Lowery 13.
She is also the owner of The Write Companion, a company that offers help and support to writers through a full range of editorial services from proofreading and copyediting to ghostwriting and research. As the daughter of a research librarian, she is also an active book reviewer.
Currently, she lives with her daughter, mother and a rambunctious German Shepherd named Reuben, in the beautiful state of New Mexico.

Technology is Not the Only Form of Inspiration

Ever since Mark Zuckerberg appeared and turned the world upside down with Facebook, the younger generation was seen by some as only the age of Youtube, Facebook, cell phones, iPods and video games. But what people don’t seem to understand is that in the last decade+, they have become the largest group of readers in the world.

The young adult genre became huge. It literally exploded with the world of J.K. Rowling and continued with another author who brought kids (and adults) on board with the vampire and werewolf community. Not only that, but young adults have become the biggest bloggers and reviewers, therefore they have the ability to ‘talk’ to their friends and create a huge ’buzz’ about a specific title. They are the ‘Social Media Masters,’ if you will.

There are a great many things in this life to be thankful for; there are blessings, good people, faith and hope that still exist in this day and age. Unfortunately, there’s a darker side that’s also come on strong. From unemployment to poverty to politics to war to bullying - you name it, it’s in the headlines. So a restoration of hope is a truly wonderful thing, and it’s being led by some amazing fiction.

Lately, the ‘fanged ones’ have gotten a great deal of competition from the ‘winged ones.’  There are a majority of angels that are of the ‘fallen’ variety who are trying their absolute best to redeem themselves. There are also love stories being heralded as “Romeo and Juliet,” and more of these characters are showing up on the big and small screen every month.

The idea for my book really stemmed from wanting to do a YA series based on ‘new’ angels; a fresh team that had yet to come down the pike. Matthew and Emily are a partnership - an angel/warrior team that still believes in all the good that their teachers have taught them, but have also gotten mixed-up in the human world where they’ve experienced every emotion possible.

I originally wondered whether or not a ‘fresh’ team that’s been surrounded by ‘good’ could even make it ‘down here’ among the seriously dark and sometimes dangerous world where humans dwell. Worse, I wondered if they’d even want to? Told from a different perspective, I tried to bring back inspiration with this duo. They certainly still have the adventure, suspense, heartache, etc. that others have experienced, but their biggest challenge is trying to keep their faith in each other.

This time around, in Gilded Wings, they face a completely new set of problems that offer tragedy and, most of all, a twist to a beloved character because of the greed, pride, prejudice, and wealth that made up the Gilded Age. From Houdini to Carnegie - Rockefeller to walking down Fifth Avenue while just a few small blocks away was a world of poverty - Emily and Matthew see it all, live it all, and find themselves needing each other more than ever before.

I love the fact that books are a source of inspiration for young adults - and I hope that no matter what Apple or Microsoft come up with in the next few years the written word stays strong!

Until Next Time, Everybody.
Amy

The Beloved Angel-Warrior Team from Until Next Time Returns!When Matt and Emily are sent on their second mission they have no idea how truly dark human nature can become...

Emily never wanted to face humans again. With the heartache that went on down below, she’s still trying to figure out how to save souls that don’t deserve saving. The only one she wants to see again is Jason - the young man she fell in love with who became the soulmate she simply can’t forget...

Matt was trained to protect and defend the souls down below. Longing to feel the heartfelt emotions that come from being human, Matt wants nothing more than to have just one life - one chance - to live and love the girl of his dreams...

The powerful team find themselves in a brand new century, living in the Gilded Age of New York City. Emily takes over the body of Anya, a young Russian girl who arrives on Ellis Island after a hideous tragedy. There she meets up with a strangely familiar young man by the name of Drew Parrish, who helps Anya survive in an unknown world of luxury, snobbery and…obsession.

What Anya’s inner angel doesn’t know is that the soul she loves is also back. This time around Jason goes by the name of Max Carrow. Once a quiet and kind boy, he’s now part of the ‘Four Hundred Club,’ and wants nothing more than to be among the most admired as he climbs the shaky ladder of society’s elite.

As two worlds merge, Emily and Matt struggle under the weight of their “Gilded Wings.” Not only will they have to figure out who they should fight to save, but they must also face a romantic choice that could destroy them both.

Excerpt for read along:
The men once again stood as she entered the room.

Offering Drew a smile, he stood in almost a reverent silence as he stared back at Anya. His green eyes were wide, and beamed like Irish emeralds across the table. “Hello,” he stuttered back, looking as if he’d seen an angel. “You are...stunning.”

Thanks for stopping by The Wormhole ~ Happy Reading!
Posted by Beverly at 5:00 AM 2 comments

Amazon Book Description:
A jewel heist… When renowned concert artist Sayuri McAllister returns to the west coast of Canada after an absence of five years, she discovers her family home has been a broken into and jewelry worth two million dollars is missing. Michael Donovan, Sayuri’s old high school flame, now a detective with the Vancouver Police Department, is the officer in charge of the case. What chance can he have… Michael takes one look at Sayuri and falls in love with her all over again. But they parted in anger years ago and Sayuri is no longer the innocent girl he once knew. What chance can there be for a Vancouver cop with someone as famous as Sayuri McAllister? Especially when that cop is investigating her family and friends? An unexpected marriage… Then Sayuri’s widowed father, Sean, marries Alyssa James, a woman Sayuri has never even met. The three live uneasily together in the Point Grey mansion until the unexpected arrival of Alyssa’s brother, Hugh James, a devastatingly handsome, charming Irishman who immediately begins a campaign to bed and wed the delicious and wealthy Sayuri. Things take a dangerous turn… Accidents begin to happen. Or are they accidents? Nothing is as it seems. Michael distrusts Hugh James and fears that Sayuri’s life may be in danger.

My thoughts:
This was a fantastic read.  Fast paced and well written.  The pages flew by.   I am a mystery reader and was worried at the start that it was going to be predictable, I am pleased to say that although it was not hard to figure out who the thief was, the story was captivating and entertaining.

I enjoyed the characters very much.  They are crafted with great thought and detail.  You have to wonder why men like Michael Donovan don't really seem to exist.  Watching Alyssa change was wonderful.  The relationships are interesting.  I was so hoping for the ending to happen like it did.  As a fan of The Guardian by Nicholas Sparks and dogs in general, I was thrilled with Buttercup - the name though....

The plot was intriguing and well played.  I enjoyed all the twists and turns throughout the book and was thrilled with the way Sean and Alyssa's relationship ended up.

Well worth the read. 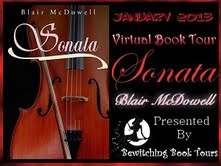 I was given this book in exchange for participation in the virtual book tour and an honest review.