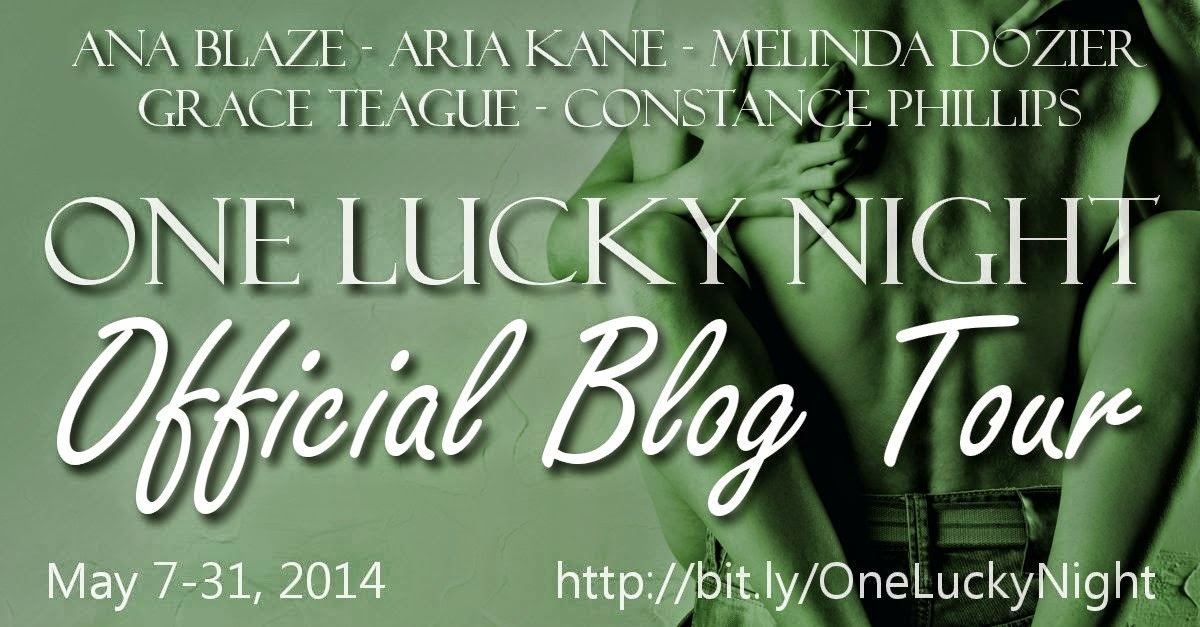 Welcome to The Wormhole and my stop on the tour.
It is my pleasure to feature: One Lucky Night.

One night can change everything…

The crew at Boston’s Brazen Head Pub hasn’t been very lucky in love. Can a mysterious visitor inspire them to look past old hurts and misconceptions and give romance a chance? One Lucky Night is a collection of five sexy interwoven novelettes by Aria Kane, Grace Teague, Ana Blaze, Constance Phillips, and Melinda Dozier.


Lucky Break by Aria Kane
Four years ago, chef Derek Chase walked out of Andrea Rivera’s life after a tragedy neither of them were prepared to deal with. When she’s called to the Brazen Head to repair a dishwasher, old sparks ignite buried feelings.

Lucky Star by Grace Teague
When her life is threatened by a mugger, Charlotte Price realizes she's in love with her best friend, Tommy Leung. The Brazen Head seems like the perfect neutral place to confess her feelings, but nothing goes according to plan.

A New Tune by Ana Blaze
When it comes to dating, Holly Hall has one unbreakable rule: no musicians. Not even gorgeous ones.  Especially not gorgeous ones. Dating them only leads to heartbreak. So why did she let singer-songwriter Cian O’Neill kiss her? And why is she thinking about doing it again?

Lexi’s Chance by Constance Phillips
As a bartender, Sean Whelan meets all kinds of women every night, but none turn his head the way that Lexi has. She’s been playing cat and mouse with him for weeks. Tonight, Sean’s determined to get Lexi to quit teasing and take a real chance on him.

Drink or Dare by Melinda Dozier
A bachelorette party Drink or Dare game pairs paramedic students, Rachel Robertson and Killian Whelan, in a flirting match. Soon, the dares threaten to turn their academic rivalry into something much more.

Check out the book trailer!
About the Authors

Aria Kane is a recovering mechanical engineer and romance writer. As a military brat, she grew up all over the country, but now lives in sunny Florida with a 60 lb mutt who thinks he's a chihuahua.

Grace Teague lives in Pittsburgh with her spouse, children and a cat named Mr. Sushi.

Ana Blaze lives near Washington DC with her charming husband and three cats who firmly
believe they are royalty. Ana is a member of Romance Writers of America.

Constance Phillips lives in Ohio with her husband, two ready-to-leave-the-nest children, and four
canine kids. Her perfect fantasy vacation would involve hunting Dracula across Europe with her daughter, who also digs that kind of stuff.

Melinda Dozier teaches English to middle schoolers by day and writes at night. She lives in Guatemala, Central America with her college sweetheart and three sons.

The authors are giving away two Amazon Giftcards!
a Rafflecopter giveaway

Excerpt:  “Lexi’s Chance” by Constance Phillips from One Lucky Night

She turned toward his voice and saw him standing in the doorway, leaning against the jamb, wearing nothing but a smile and a green towel slung low around his hips.

“That’s because you are. I think we can do something about that.” He curled a finger toward himself and she couldn’t help but follow him down the hall.  She could hear the shower. When he opened the door, steam poured out, wrapping around her and warming her like his touch. As with everything he’d done, he’d put some thought into this.  The bathroom was long and narrow. On the wall opposite the tub stood the sink, with a large counter. He’d set some towels out and lit two candles. They cast faint orbs of flickering light that danced against the blue shower curtain and gave off a flowery scent.

“Aww, you’re a romantic.” She draped her arms over his shoulders and Sean leaned in, capturing her mouth with his. Eager to get to know the body displayed before her, she glided one hand over his chest and stomach, stopping where he’d rolled the towel on his hip. Gripping the edge, she gave it a firm tug.

“Not so fast.” He took a half-step backward and clasped the hem of her shirt in his hands.

“You’ve got some catching up to do.”

She lifted her arms. It was all the encouragement he needed.  After removing the shirt he tossed it to the floor behind him and stepped closer. His hand slid down the side of her neck and over her collar bone. He used a feather-light touch that caused her body to shiver. Not from the cold this time, but from the anticipation.