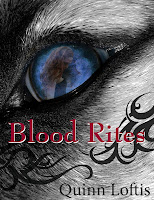 Amazon Product Description:
With the challenge complete and the corrupt Alpha of Coldspring defeated Fane is now free to complete the mate bond with Jacque and perform the Blood Rites. Although the challenge is done, the affects are far reaching. Once it is known that Vasile one of the strongest Alphas in the world is in America, specifically Coldspring, TX, there is one Alpha who cannot over look the significance of this. An Alpha who happens to share Jacque's DNA, but is this the one she needs to fear?
With her mom driving and her two best friends, Jen and Sally in tow, Jacque set off for her happily ever after. She will soon realize a plan has been put in motion that will change her course and possibly tear her from Fane's grasp forever. It will take a wolf pack, her mother's love, her two best friend's unrelenting determination, her own will to survive and the undying love of her mate to bring her home. The question remains, if she fights, if she endures, who will she be, what will be left once she is back in her mates arms?
My thoughts:
This was my first book by Quinn Loftis.  I was thrilled!  I have already gone and gotten Prince of Wolves and absolutely cannot wait for the next book, Just One Drop, which is sure to be Jen and Decebel's story!  That is sure to be a wild ride!
So...about this book:
The characters are wonderful.  Each has a fantastic and well developed personality.  They seem to embody the very ideas of family, friendship, and loyalty.  At times I had a hard time putting these personalities into teenagers, but loved them just the same.  I was fascinated by the 3 musketeers-type relationship between Jen, Sally and Jac - three women that get along is rare and it was fun to be a part of it while reading the story.  The men in the book are incredible - even the bad guys!
One of my favorite parts of shifter stories is the bond/soul mate idea.  I love the dedication and give all that we see in bonded pairs.  Alina (Fane's mother) tells Jen about the bond on page 145/146 and it is amazingly written!  The last sentence goes like this,
"She gets a friend, a lover, a mate, the only man in this world who can complete her and give her the other half of her soul."
I can't imagine that kind of total devotion - although the thought of someone being able to read my mind at any given time is terrifying!
The story is a well paced emotional roller coaster and the plot keeps you on the edge of your seat.  I couldn't turn the pages fast enough for my liking, but was so into the story that skimming to get to the next page faster was absolutely NOT an option!
If you enjoy shifter stories, or if you have even wanted to read a shifter story to see if you would like them - DO NOT miss this one!
Posted by Beverly at 2:21 PM 1 comments

Blog Tour: The Last Awakening by Rachel Firasek (Giveaway too!) 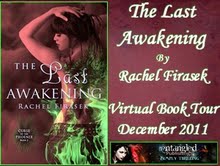 Click HERE to get to Entangled Publishing!
Welcome to The Wormhole and my day on the tour!
It is with great pleasure that I introduce Rachel Firasek and The Last Awakening!

Rachel Firasek grew up in the south and despite the gentle pace, she harassed life at full steam. Her curiosity about mythology, human nature, and the chemical imbalance we call love led her to writing. Her stories began with macabre war poems and shifted to enchanted fairytales, before she settled on a blending of the two.
Today you’ll find her tucked on a small parcel of land, surrounded by bleating sheep and barking dogs, with her husband and children. She entertains them all with her wacky sense of humor or animated reenactments of bad 80’s dance moves.
She’s intrigued by anything unexplained and seeks the answers to this crazy thing we call life. You can find her where the heart twists the soul and lights the shadows… or at www.rachefirasek.com .
CURSE OF THE PHOENIX - Book Two

Book 3 coming January 2012!
http://www.entangledpublishing.com/the-last-awakening/
Book Description:
For three hundred years, Arabella’s life has been one meaningless death after another. In a cruel twist of fate, Osiris gifts the phoenix her mortality and long-gone voodoo magic with a warning that she must save her next soul within a week without using magic, or she’ll lose her power forever.
Ex-soldier Greyson Meadows desperately wants to be freed from the nightmares and guilt that haunt him. Confronted by a waif of a woman who forces him to face the truth about his past, he runs fast and hard, fighting the need to prove himself worthy despite his perceived failures.
When Ari becomes the target of her own magical blunder, the weak will find strength and the strong will fall. One will have to give up everything so the other can have peace, but will love’s magic withstand the loss?
For your reading pleasure....an excerpt:
Grey propped himself against the inside of the door. He’d given her a few minutes alone after work while he grabbed his bag from his car. In fact, he’d spent at least a good ten convincing himself he could do this. Now, he wasn’t so sure, but he would still fix her door before he left. Damn woman hadn’t even locked it. He’d knocked twice and stepped inside when she didn’t respond.
“Arabella?”
No answer.
He’d wait. Through the paper-thin wall he listened to the shower and then the light patter of dainty feet running across her room. This really was the worst apartment he’d ever seen. Worse than some of the military tents he’d lived in.
He sat his bag beside him and tapped his fingers along the door. Any day now. Her bedroom door flew open, and she rushed out. He’d imagined her in silk pajamas with beaded nipples teasing him and begging for his taste—not the sweatshirt or the flannel bottoms. They weren’t bad either and actually may have added to her
appeal—there was something highly erotic about wondering what was beneath.
She sagged a little and dropped a hand across her chest. The smile she’d met him with slipped. “What?”
“You’re beautiful.” Damn, if he didn’t stop putting his foot in his mouth.
She blushed, painting her cheeks with the prettiest shade of pink before she ducked away from him. “What’s in the bag?”
“You need more protection.” He pulled out his wallet and fumbled through the slots for a business card. She leaned in closer and stood on tiptoe, watching his every move. “Nosy?”
When he handed her the card, she frowned.
“What did you think this was?” he asked.
She didn’t answer, but her pink cheeks shouted it loud and clear.
“Did you think I was going for a condom?”
She turned away, sank down onto her sofa, and pouted.
Surely she didn’t think…nah, no way could she want…He burst into a fit of laughter. Christ, how long had it been since he’d laughed? Really laughed? She was feisty as hell. He wanted more than anything to snatch her up and carry her to her creaky bed and let Mike—and whoever else wanted to—listen through her walls as he connected with her in the basest of ways. But first, they had things to get out in the open.
“Don’t laugh at me.”
He chuckled harder and moved closer to her. “I’m sorry to disappoint you. I brought some locks over. Before I leave, I’ll install them.”
“You don’t have to.”
“I want to.”
She sputtered. Her eyes sparked for a moment, and when she blinked a soft cloud covered the amber. Shit. Smoke floated across her eyes like something straight out of a B movie. He shook his head and pinched the tender skin above his brow. Damn hallucinations. He thought he was past them. “Are you okay?”
“You laugh at me and then want to know if I’m okay? Really?”
“Your eyes. I thought I…never mind.” Shut up, man, before you show her what a fucking freak you are.
Ari spun away from him. She gathered deep breaths, stretching the muscles in her back tight. “I’ll be in my room while you do whatever it is you’re going to do. Come get me when you’re done and can remember your manners, s’il vous plait.”
“Ari?”
She didn’t stop for him. Damn, he’d been an ass. Exactly what he said he wasn’t going to do. His plan had been to fix her door. Maybe have a beer with her. Find out how she was dealing with what happened, and possibly share some of his sorrow. But he’d think twice about the drink if he was going to start seeing shit. He’d had all the flashbacks he wanted in a lifetime, but to actually start hallucinating was too much. The alcohol was screwing with his head. Might be time to cut back.
He installed the new deadbolts and loaded his tools. The bedroom door remained shut, but the light peeked from beneath it. He crossed to knock softly on the thin wood. “Ari?”
No answer.
“I’m done. I’ll let myself out…come lock up after me.”
Yeah, he’d screwed up and he’d be lucky if the one person he could connect with, who’d understand, ever talked to him again.
Posted by Beverly at 5:00 AM 2 comments 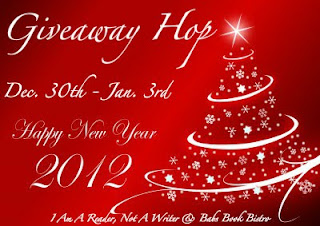 This giveaway is hosted by I Am A Reader, Not A Writer and  Babs Book Bistro.
You can get to the entire Giveaway Hop Linky by clicking HERE.
I am stop # 24 - stop #23 is: ~Pandora Poikilos - Peace from Pieces (Int)
and stop #25 is: Curling Up By The Fire (Int)
The prize here at The Wormhole is any ONE book = $10.00 or less.
The giveaway is International as long as The Book Despository ships free to your location.
Rules: You must be a follower of The Wormhole and fill out this form completely.
Good luck to all and Happy Reading!
Posted by Beverly at 12:59 AM 10 comments