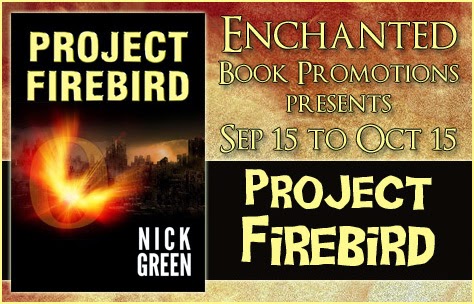 Author Bio
Nick Green lives in the UK. He is the author of seven fiction books to date, including the middle-grade CAT KIN trilogy published by Strident. His other books include THE STORM BOTTLE, a fantasy adventure about the dolphins of , and most recently the FIREBIRD trilogy, a YA science fiction epic.

Title: Project Firebird
Author: Nick Green
Genre: Young Adult Science Fiction
How do you save the world when it’s already too late?
Don’t ask Leo Lloyd-Jones. Ask him how to steal a car, or why he got excluded from every school in , but don’t come to him for help. This whole thing must be a daft mistake – and if anyone finds out, he’s done for.
Earth is on a deadly collision course that nothing can prevent. The only real hope is Project Firebird, deep inside a blast-proof bunker that shelters the brightest and bravest young people. Leo has got mixed up with the likes of Rhys Carnarvon, the celebrated teenage polar explorer, and other child prodigies chosen to keep the flame of civilisation.
Among them is the streetwise Paige Harris, a girl Leo likes a lot (but not in that way). Paige is desperate to rescue her little sister from before the catastrophe strikes. But no-one is crazy enough to try that. Almost no-one.
Leo is about to find out why he’s here.

Excerpt:
Chris unlocked the door to a long, narrow hall. A tall girl was there already, busy in one corner. At the far end stood three man-shaped placards with ring targets over their chests.
Mason cheered. ‘A firing range!’
‘Shooting range.’ Summer Dartington turned to face them. She didn’t smile, only flicked her brown ponytail. Behind her stood a rack of slender pistols with yellow grips. Leo itched to try one.
‘Hi, Summer.’ Paige was being polite.
‘Hello. Hi.’ Even after three weeks, Summer hadn’t learned all their names.
‘Summer will be your firearms mentor,’ said Chris.
‘No.’ Andrew stood in the doorway. ‘The judo stuff, I’m fine with that. But guns, no.’
‘Don’t get your knickers in a twist.’ Summer stirred a tub of black pellets with her finger. ‘These are air pistols.’
‘You’ll become proficient with these practice weapons first,’ said Chris. Leo swapped a grin with Mason – it sounded as if proper guns would come later. Summer donned wraparound orange glasses, then opened a pistol to tip in a caterpillar of lead shot.
‘I’m not shooting a gun,’ said Andrew. ‘My Pa would be mad if he ever knew.’
‘Understand this, Andrew.’ Chris drew himself up, becoming every inch Major Bacchus. ‘If people threaten you, they threaten the Project. And the Project is about saving humanity. So anyone who threatens it is an enemy of humanity.  So you stop them.’
As if on cue, Summer raised her pistol and fired four times, recocking rapidly between each shot. The noise was like two sets of popping balloons at either end of the hall. The centre target, shaped like a man wielding a knife, wobbled on its hanger. Andrew’s eyebrows switched his face to sad.
‘Count me out.’
‘Okay.’ Chris let it go, easy as that.
‘That’s all right, then, isn’t it?’ said Summer. ‘Anyone can say they won’t fire a gun when they know someone else will do it for them.’
‘Enough.’ Chris glanced at her. ‘No problem, Andrew. It’s your decision. Go and join Maddison. She’ll be at the Seed Banks. You can help her lead tomorrow’s farming class.’
‘Thanks, Chris.’ Andrew left them, smiling in relief. Summer watched him go with an odd twinkle in her eyes. Amusement, scorn, or some secret thought? It passed too quickly for Leo to decide, and he might have forgotten ever seeing it.