This virtual book tour is presented by Reading Addiction Blog Tours.
Click HERE for more tour information.
Welcome to The Wormhole and my stop on the tour.
It is my pleasure to feature Aaron Redfern and The Long Way. Aaron Redfern
Aaron Redfern has been reading and writing fantasy since a time when he could count his age on his fingers. He went to and studied English, a language in which he was already proficient, and although he learned almost nothing from the English professors, dead poets and novelists taught him a great deal. While at college, he fell thoroughly in love with . He has decided never to leave and currently resides near . 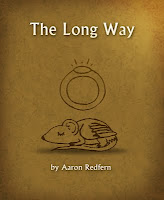 In a move that defies all logic and likelihood, a young boy named Spiff is called upon to carry out the most important quest that has ever been undertaken. His mission drags him headlong across the face of the world, through a veritable pantheon of hardships and threats that are at once chilling and baffling. Along the way he meets dragons and madmen, and learns that the lovable and the monstrous are two sides of the same coin.

Conceived as a darkly whimsical loose retelling of the Tolkien saga, The Long Way poses the question that high fantasy rarely cares to ask:   Why?

Short Excerpt:
The city was suddenly there, a huge half-circle sprawled out before them.  It was ringed by high walls of gray stone, broken here and there by towers.  Blue and white banners stood atop the ramparts, tossing gently in the morning breeze.  And sure enough, behind it rose the great stony peaks of the Pummeling Razor of God, forming an impenetrable wall against the sky.  They completely dominated the view of anyone looking west.  Where had they been all this time?
Three gates punctuated the walls.  A wide cobbled road led to each.  Spiff’s eye followed one of these roads out from the city, and saw it branch into a few smaller roads, each of which spiderwebbed out into tinier paths.  The dirt road they were on led to one of these.
They came to the intersection, and Spiff saw that there was a signpost driven into the ground.  Two sharpened slats of wood were nailed to it, one pointing down each of the paths away from the city.  Nothing was written on either of them.
He asked what it meant.  The mouse shrugged, a barely perceptible gesture when made by a creature his size.  “We were nowhere.  Now we are Somewhere.”

My thoughts:
Wow!  I wasn't sure what to expect from this little book, but I was pleasantly surprised by such a big adventure.  Well written and filled with a host of unforgettable, widely varied characters.  I love fantasy adventure and was thrilled with this story.


This tour has a tourwide Rafflecopter giveaway - click HERE to go to it.
Posted by Beverly at 5:00 AM 0 comments 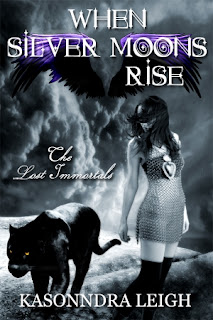 Facing an unstable future, Chela Prizeon leaves Castle Hayne and crosses over to enemy territory in pursuit of Faris--the boy of royal blood who is cursed by a bitter rival. But soon Chela learns that he has been taken deep into the treacherous frozen prisons--a majestic, but deadly place where people enter and are never seen again. To find the boy she loves and his lost sister, Chela must join forces with one of her greatest enemies. And even though she pulls strength from the good in her powers, she finds herself drawn to the dark side's temptation as well.

My thoughts:
Well written and entertaining.  This book grabs you from the first page and holds on until the end, where it leaves you wanting more.  The plot is twisty and clever.  The characters are nicely developed and easy to fall for.  Filled with emotion, the author brings us remarkable characters who fight for a love that an actual person could never hope to be a part of.  I can't wait to read the next one.

*** I received this book at no charge in exchange for an honest review.
Posted by Beverly at 4:00 AM 0 comments