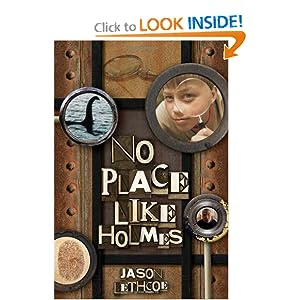 
The new resident in 221A Baker Street is about to give Sherlock Holmes a run for his magnifying glass!
When Griffin is sent to stay with his detective uncle at 221A Baker Street for the summer, he is certain that his uncle must be the great Sherlock Holmes! But Griffin is disappointed to discover that Holmes lives at 221B Baker Street and his uncle lives unit 221A. His uncle is a detective, just not a very good one. But when Griffin meets a woman with a case that Holmes has turned away for being too ridiculous, he and his uncle team up to help her. Along the way, Griffin shows his uncle just what it means to have true faith in God, even when the case challenges that.  The woman claims that her husband was eaten by the Loch Ness Monster, but monsters aren't real-or are they?
My Thoughts:
This is a great mystery for YA readers!  This is a wonderful story for the "new to mystery" readers to 'cut their teeth' on.  It is well written, planned out from beginning to end, entertaining, and much more emotional than I had expected.
The characters are fantastic!  I fell in love with Griffin - what a sweet, sad little boy.  I found myself close to tears many times.  I was thrilled to see that his demeanor influences that of his Uncle Snodgrass in a positive way.
The villains are sooooo evil, Nigel - - - what a HORRID man - a larger version of the contemptible young man he had been as a child.
All the characters stand out in some way.
The plot is not so complicated that the adult reader doesn't see the next move coming, but all the while it is complex enough to keep you turning the pages and wondering about the end.
I have to admit that I wasn't ready for the end!
I love that there is an element of steampunk thrown in!  The inventions are wonderful.  I would love to have read this aloud to middle schoolers, just so I could have seen their faces when Griffin gets to use Snodgrass's information finding machine.  Watts is amazing!


Overall a very worthwhile read!  Intriguing and entertaining from start to finish.
I plan to impatiently await the next book in the series!
Posted by Beverly at 6:00 AM 0 comments