Choke is the 2nd in a series of sci-fi novelettes and the sequel to Suffocate. 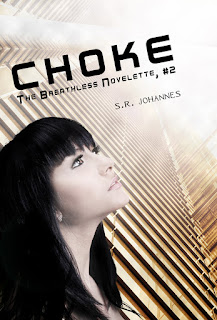 When Eria escapes her home in the Biome, she uncovers more about herfeatures and specifications as a HumaNot. Following her father'sinstructions, Eria embarks on a journey into a dangerous and unpredictable world.Along the way, she encounters a young rebel, Dirk, who explains he's from the Anarchy, an underground human resistance rising up against the BOTs--advanced man-made robots gone wild. Together, Dirk and Eria battle underground serpents, desert dingos, sand storms, and advanced Bots that are always hot on their trail. As they become closer, Dirk reveals his hatred of machines, forcing Eria to hide
the secret of what and who she really is.

When the truth of her identity comes out, Eria is forced to become the very thing she hates the most.

Choke is the 2nd novelette in THE BREATHLESS series. It is a 20,000 word young adult thriller that combines the dystopic and science fiction genres. The two novelettes will be available on ebook only for only 99 cents!  The 3rd novelette in the series, Exhale, is scheduled for Nov/Dec 2013 just in time for the holidays.

Fans of Wool, Never Ending Sky, Mila, or Across the Universe will love this mini-series.

Giveaway:
The author is offering a free ecopy of either Choke or Suffocate to one randomly drawn commenter.  You must be 13+ to enter.  Please leave your name/alias and a valid email address in your comment.  The giveaway will run from June 25, 2013 until July 2, 2013.  Winner will be notified by email and the prize will be sent by the author.