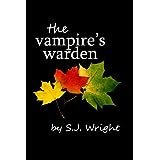 The Vampire's Warden by S.J. Wright

200 pages (paperback version)
Blog Tour dates: May 2 (starts here at The Wormhole!) through May 16 - finishes at author site!

*received this book (digital copy) free of charge in exchange for an honest review and participating in the blog tour!

Amazon Product Description:
It was a flash in the moonlight, a blur of motion like I’d never witnessed before. No human had the capacity to move like that. When I found myself face-to-face with him there in the meadow, I knew without a doubt that the journal was authentic. I knew that my grandfather hadn’t been crazy at all. Because a foot away from me stood a vampire. Sarah Brightman reads her grandfather's journal in stunned disbelief. What was once her grandfather's responsibility has passed to her father and now to her. She has become the Warden. Her life will never be the same.


Michael is so interesting!  What is really going on?  Who is/was Michael and what is he to be to Sarah?  Alex is great!  What is his story for real?  How does he know Michael?  Where does this budding friendship between he and Sarah go?  Speaking of Sarah... she is a fantastic character.  Tough and determined.  I can't wait to find out what she does with her new job as The Vampire's Warden.  I get the impression that her and Michael will be changing the way things have been for the last hundred years.


The ending is shocking!  Total cliffhanger!!! CAN'T wait for book 2!
I will be checking out the final stop on the blog tour where we will be getting a sneak peek at book 2.


I enjoyed the story, but feel like it could have been fleshed out in places.  I finished with questions - loads of questions.  Some of those questions I am sure are left unanswered so that the reader is looking for the next book in the series, but I felt that there were some holes.


All in all though a really entertaining read!  Be sure to check it out!
Posted by Beverly at 6:00 AM 0 comments

It's Friday again - Let's hop!!!
This meme is hosted at Crazy For Books!
The question of the week?  What 2011 Summer release are you most looking forward to?
Me - - I am looking forward to Hounded: The Iron Druid Chronicles by Kevin Hearne

Amazon Product Description:
Atticus O’Sullivan, last of the Druids, lives peacefully in Arizona, running an occult bookshop and shape-shifting in his spare time to hunt with his Irish wolfhound. His neighbors and customers think that this handsome, tattooed Irish dude is about twenty-one years old—when in actuality, he’s twenty-one centuries old. Not to mention: He draws his power from the earth, possesses a sharp wit, and wields an even sharper magical sword known as Fragarach, the Answerer.

Unfortunately, a very angry Celtic god wants that sword, and he’s hounded Atticus for centuries. Now the determined deity has tracked him down, and Atticus will need all his power—plus the help of a seductive goddess of death, his vampire and werewolf team of attorneys, a sexy bartender possessed by a Hindu witch, and some good old-fashioned luck of the Irish—to kick some Celtic arse and deliver himself from evil.
I have been seeing this one around and looks like something I would really enjoy!
Happy Reading!
Posted by Beverly at 1:21 AM 5 comments