This virtual book tour is presented by Bewitching Book Tours.
Click HERE for more information.
Welcome to The Wormhole and my day on the tour.
It is my pleasure to feature:
Barbara Morgenroth and Bad Apple. 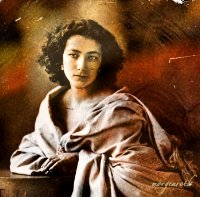 Barbara has stopped by for an interview:
? When did you first realize you wanted to be a writer?
I don’t know that I ever had that realization.  I was just a writer always.
I wanted to be a photographer when I realized how much fun that could be and that I couldn’t draw worth a darn but still had the ability to see what made a good image.

? How many jobs did you have before you became a writer?
One.  I taught horseback riding.  I had an internship gig at a photographer’s business and did all his newspaper work while he stayed at the studio and did his thing there.  It wasn’t technically a job and wasn’t paid but I learned a lot.  At that point, I thought I was going to be a photojournalist so it seemed like I was getting somewhere.  Then I started the stable and when the owner of the property wanted to go back to dairy farming, I began writing a novel.  I was 24 and that book was published two years later.

? How long does it take you to write a book?
I have a couple that I would say have taken me up to five years to write and polish so they’re where I’m happy with them.   Most of my books take about six months.   It depends on the book and how complicated the story and the characters are.  Sometimes you just need time to think.

? What would you say is your most interesting writing quirk?
It’s not interesting, it’s just appalling how long it takes me to get down to work each day.

? Do you have a routine that you use to get into the right frame of mind to write?
I wish I did, then there would be some predictability about it!

? Where do you get your ideas or inspiration for your characters?
That’s the great mystery of the creative process.  Things come to you.  Pieces fit in a way they never did before.  You draw from many sources and it all weaves together like a tapestry.

? How do you decide what you want to write about?
I don’t think I decide.  It’s more of a compulsion.  An idea won’t shake free, it just stays at the edge of your mind until you realize there is something there waiting to be explored, something to be said.

? What books have most influenced your life?
I read all the Little House books, the Anne of Avonlea books, the Whiteoaks of Jalna books, the Horatio Hornblower books.  I think those were very important to me for a time.  The idea of a series appealed to me, how the books followed a person or a family for years or generations.   Now I like doing a series but by nature they are more episodic than a standalone book and other people find that more difficult than I do.

? What is the first book you remember reading by yourself?
I think it was something about Lucinda the donkey.

? What are you reading right now?
I like biographies very much so I’m reading about the life of the songwriter Irving Berlin.

? What do you like to do when you are not writing?
I love to do photography,  knit, garden and play Boggle online.

? What is your favorite comfort food?
Pasta has to be the winner.  Although, let’s be serious.  French fries are great, aren’t they?
Fried, salty and carbohydrates.  They hit all the bases.

? What do you think makes a good story?
A good story is the balance between action and character.  If all you have is action or plot, then the story is shallow.  If all you hear about is the inner world of the character, you feel like nothing is happening.  Finding the balance is quite difficult but it’s done all the time by all kinds of writers so it’s not impossible.

? Who would you consider your favorite author and why?
Umberto Eco.  He is so intelligent, so well-read, and so smart about human nature that his books just glow.  He is able to balance the exterior world with the interior world perfectly.

? What book, if any, do you read over and over again?
Didn’t we all read the Harry Potter books over and over until the next one was released?
I did.  I don’t think I’ll ever reread them since I practically know them by heart now.

I read Jane Austen again and again and expect that won’t change.

More About the Author:
Barbara was born in and but now lives somewhere else. By now, she thinks of herself as a country girl and knows more about gardening and animals than how to ride the subway.

Starting her career by writing tweens and YA books, (and did the cover photography for her first two books published by Atheneum so continuing to do the covers to her ebooks is predictable), she was actually aiming at the small screen. Television seemed like the perfect place for her even if she had no clue how to get there. Life is funny and often presents opportunities. Advice--Grab Them! Through a neighbor, Barbara wound up getting an introduction to a lower honcho at ABC and an audition to write for them. Her hopes were more than dashed, they were disintegrated, evaporated, demolished when ABC couldn't find a place for Barbara on . (No Luke and Laura in her future!) To ease the crushing disappointment, Barbara wrote “In Real Life I'm Just Kate” about a 17 year old girl who becomes a star on a soap opera. That became an open sesame moment and shortly thereafter Barbara became the last headwriter for NBC's daytime serial, The Doctors, where she was ordered by the network to kill Alec Baldwin, shooting him not once but twice. With two different guns. From different directions.

You can read the book that started Barbara’s television career as the Kindle YA ebook, “Just Kate”, now with a substantial tweak because living life made her smarter.

You can also read about some could-be-hers-could-be-rumors experiences gleaned during Barbara’s stint in daytime television in the Kindle romantic comedy, In Under My Head.  Barbara is a recipient of a Writers Guild of America Best Writing Award for her work on One Life To Live.

Whether you're looking for a Mature YA or a romantic comedy, Barbara has a book for you!

“You tell and next time you won’t even be able to crawl away.”

Neal Marchal lived with this threat for the next eight years. When she finds her neighbor murdered, she knows who did it. The why is the secret the family has been keeping forever. The reminder to never reveal the secret is her limp.

She rebuilt her life and now Neal has everything to live for—music, performing and a growing affection for the young man who pulled her to safety.

Then Joe comes home. Neal knows Joe’s going to finish what he started 8 years ago because she told. But this time Neal vows the outcome will be different.

My thoughts:
This little book opens up a world of emotions, issues and a reality that is frightening.  The human animal is truly hard to understand.  This story gives us an inside look at the life of a girl named Neal.  A girl who learned early how to stay alive and later how to hope for more.﻿
Posted by Beverly at 5:00 AM 0 comments