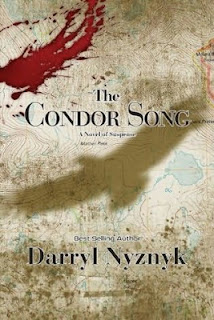 LOS ANGELES – Lawyers, and killers, and endangered birds? Oh my. This unusual combination sets the stage for a riveting legal thriller by best-selling author and former attorney, Darryl Nyznyk.
Guided by his experience in the legal arena and inspired by the 1960s and 70s Sierra Club battle with Walt Disney over a proposed ski resort in the Sierra Nevada Mountains, Nyznyk brings captivating realism to his newest novel, The Condor Song (June 2013).
Described as “The Verdict”, starring Paul Newman, meets John Grisham’s The Pelican Brief, the book follows Sean Donovan, a new partner in a major law firm who lost everything when he took a costly ethical stand. Wifeless, jobless, and betrayed by his closest friend, Sean spends 13 years trying to find his way back.
Barely eking out a living on small cases, Sean’s redemption comes with the death of renowned environmentalist, Buck Anderson. When the dead man’s niece requests Sean’s help in resolving Buck’s last case with the Sierra Club, Sean happily accepts, but learns too late the opposition is his former law firm and the partner who betrayed him. He may have just signed his own death warrant.
Is Atticus Golden, the Disney-like developer against whose project Buck was working, connected to the Mexican Mafia and groups that would go to any lengths to protect their investments? As Sean gathers evidence against “Uncle Atti,” all signs lead to Buck’s murder. A battle to save a precious environmental resource turns into a classic struggle of good versus evil where a national treasure - and a man’s soul – is at stake.
The Condor Song is a gripping thriller that appeals to suspense lovers and environmentalists alike
“Writing this book, I was able to play with the things that I had been fascinated with for years: Disney, real estate development, the law, the Sierra Club and the environmental movement,” Nyznyk says.

DARRYL NYZNYK lives in Manhattan Beach, CA with his wife, Loretta. After practicing law for 20 years, Nyznyk became a full-time writer and teacher. He is also the author of the holiday novel, Mary’s Son; A Tale of Christmas. For more information, please visit www.crossdovepublishing.com.

My thoughts:
This is truly a story of conviction and desire, of betrayal and perseverance.  The characters are carefully constructed and interesting.  I tend to choose a favorite and for me - it's Carla.  I feel that she was the strongest character, she played an enormous role in the outcome of the book and yet I felt she was portrayed as a secondary or supportive character.
The rivalry between Richard and Sean is a thread that keeps you reading, wondering what nastiness Richard will come up with next and how Sean will cope.  Richard is a horrible character!  He has been created just right to make the reader really dislike him - well done!  Sean was of course the main character, but there were times that I wanted to shake him and say, "Stop feeling sorry for yourself!!!" So, he too was wonderfully developed.  Each character, no matter how big or small a role they played in the plot of the story, elicited some kind of emotion from me as I read.
I enjoyed the Disney/Golden comparison and Uncle Atti's drive to create a world from his dreams and imagination.
The mystery surrounding the Condors, the building site, the property buying, and the murders and attempted murders make for a page turner.
I was thrilled with the ending of the book. The author brings closure to every issue of the story and you are left with a completely satisfied feeling as you close the cover.
(I received this book in exchange for an honest review).


**For every copy of the book purchased from Amazon on JULY 1st, Darryl will donate $1 to The Sierra Club.**
Posted by Beverly at 5:00 AM 0 comments